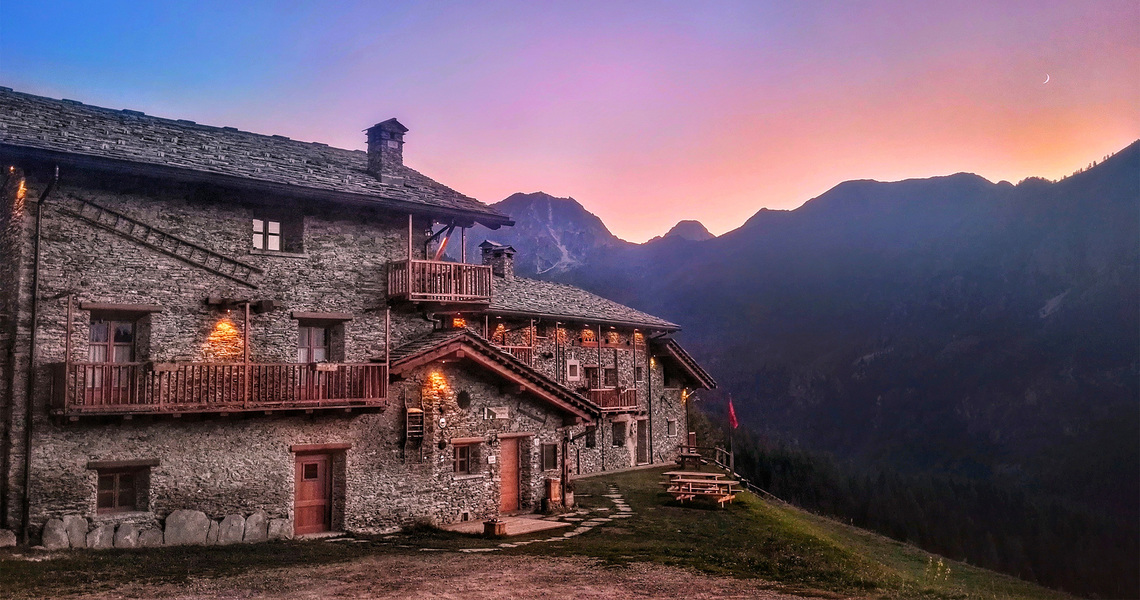 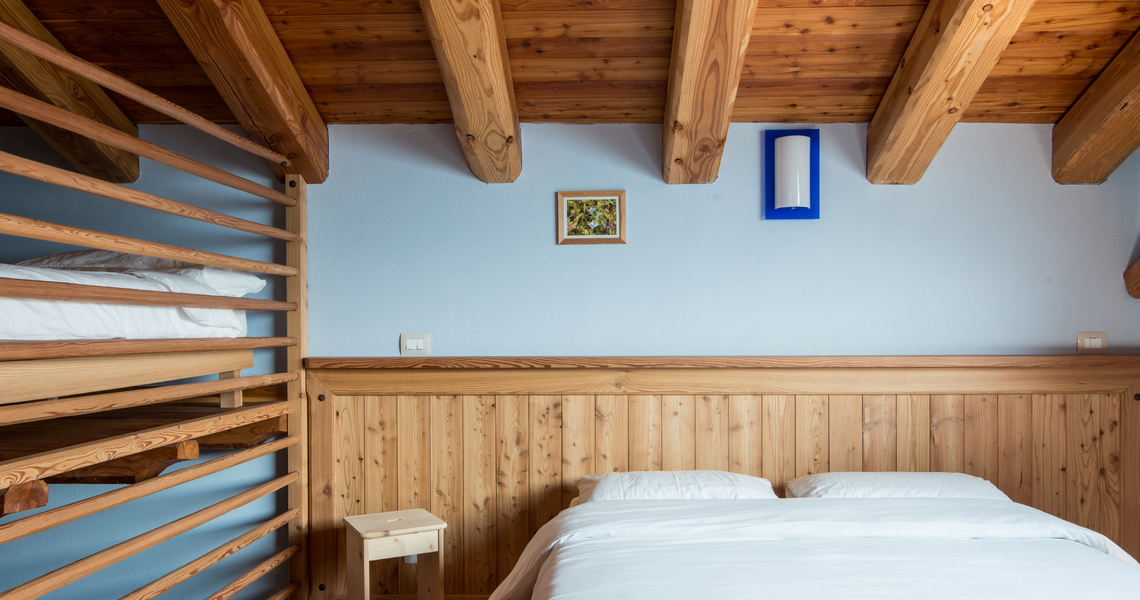 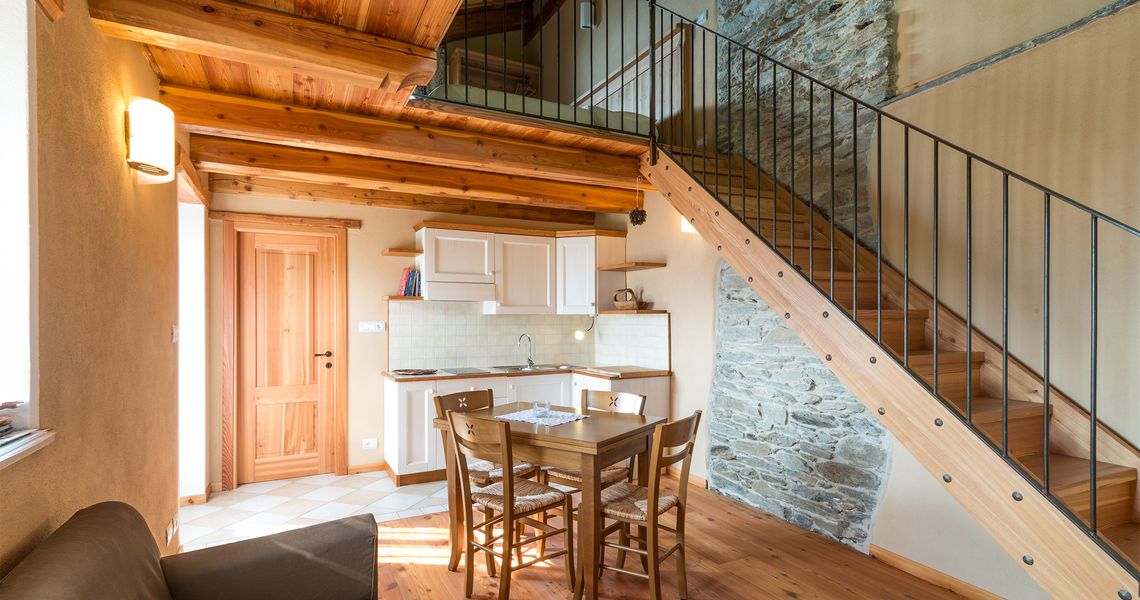 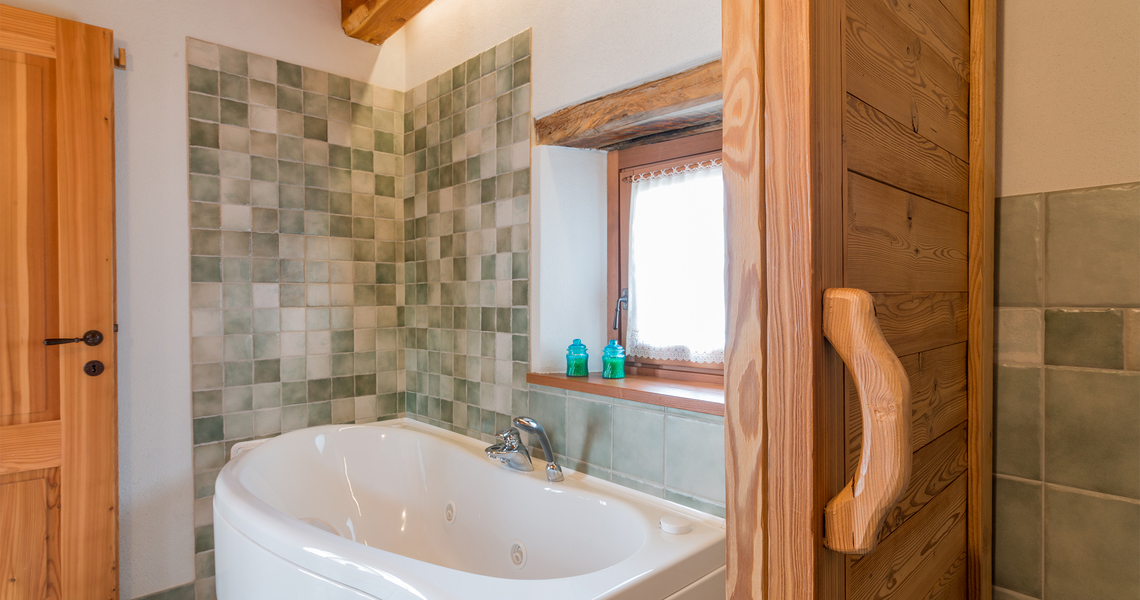 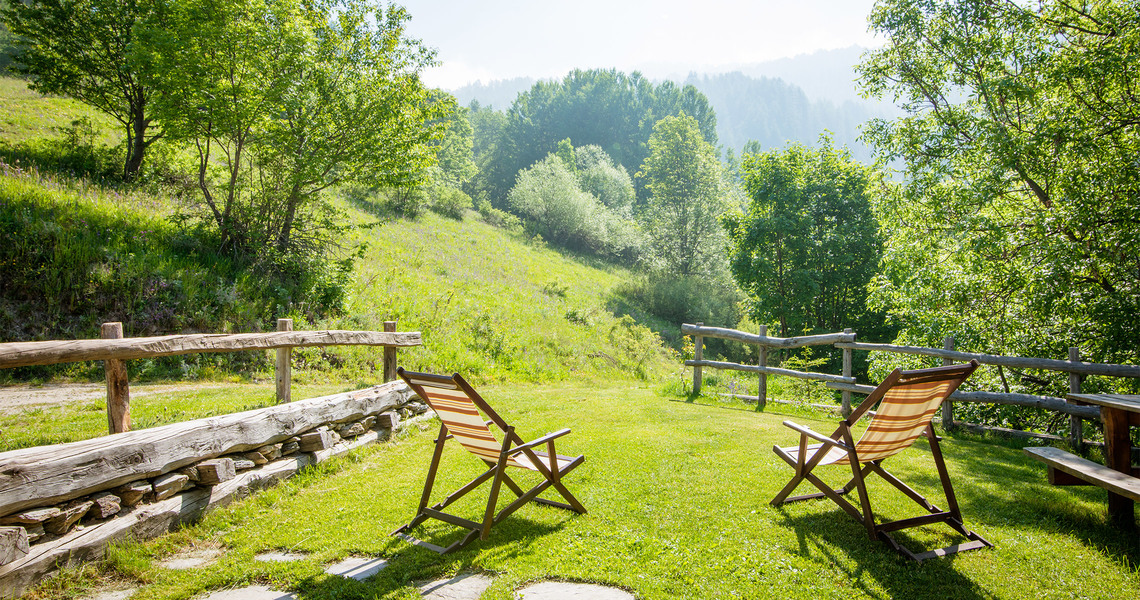 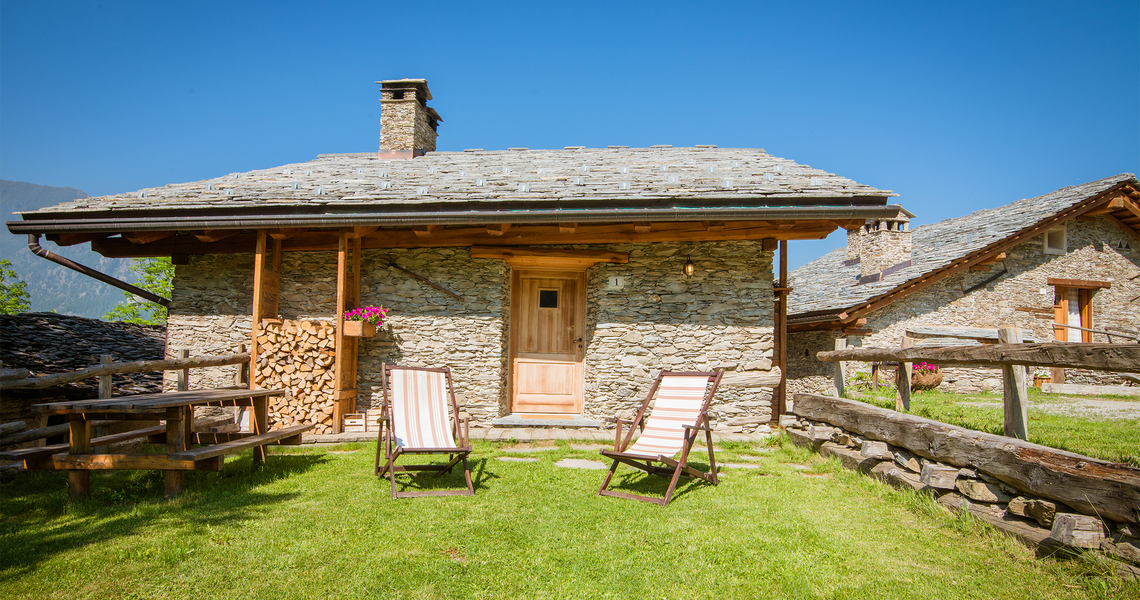 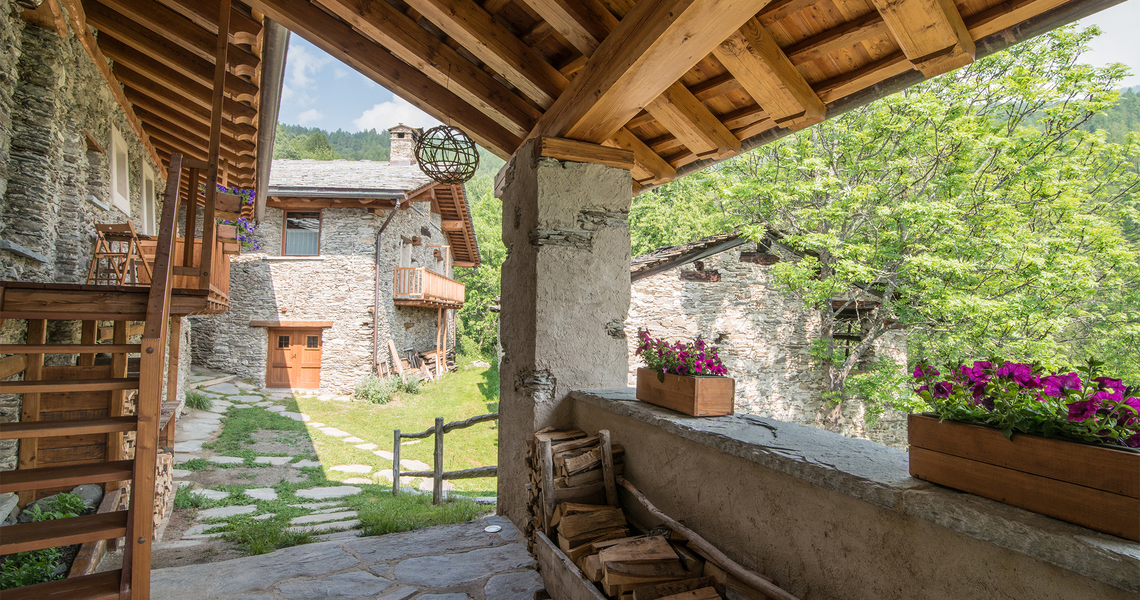 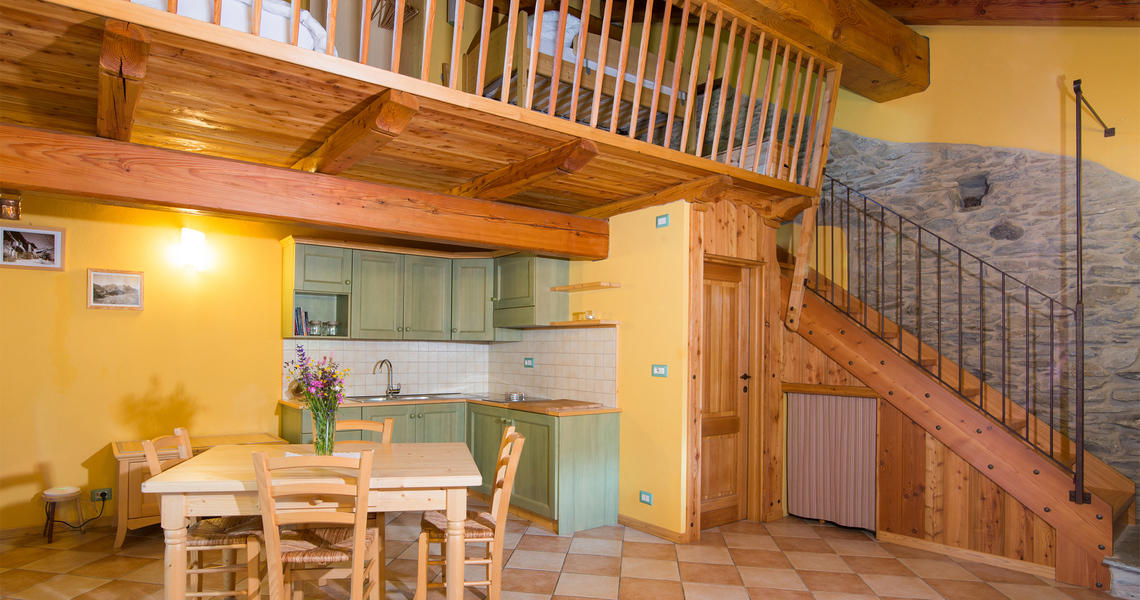 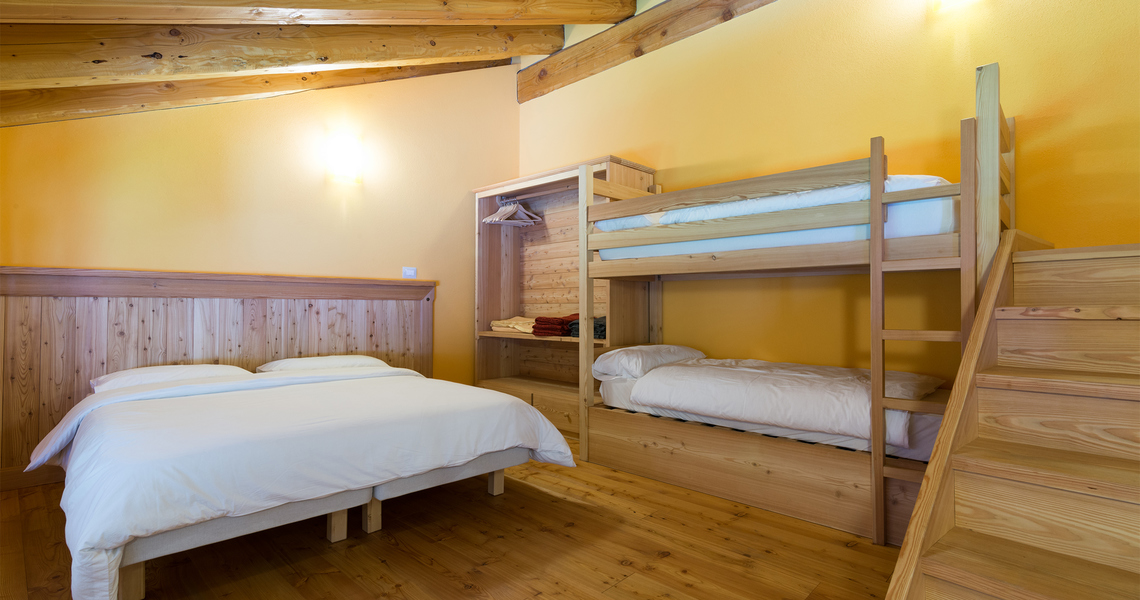 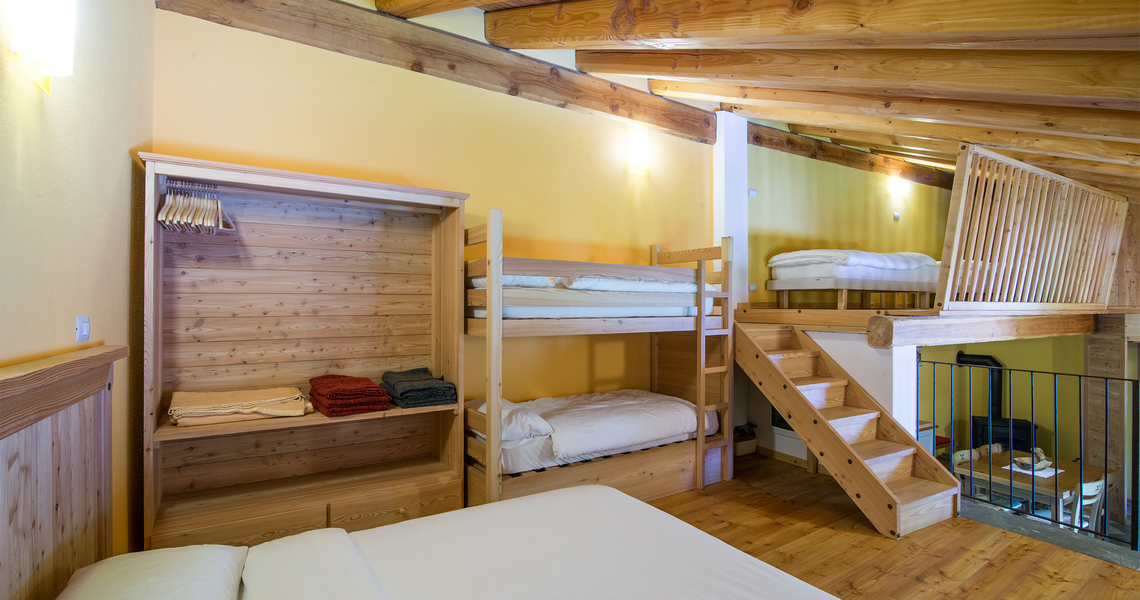 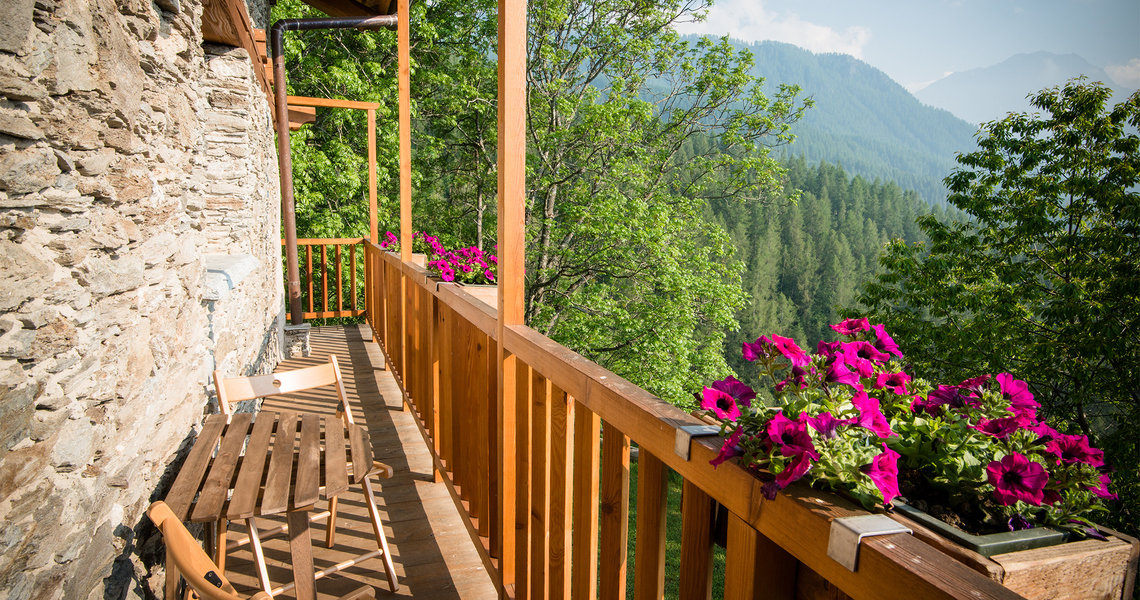 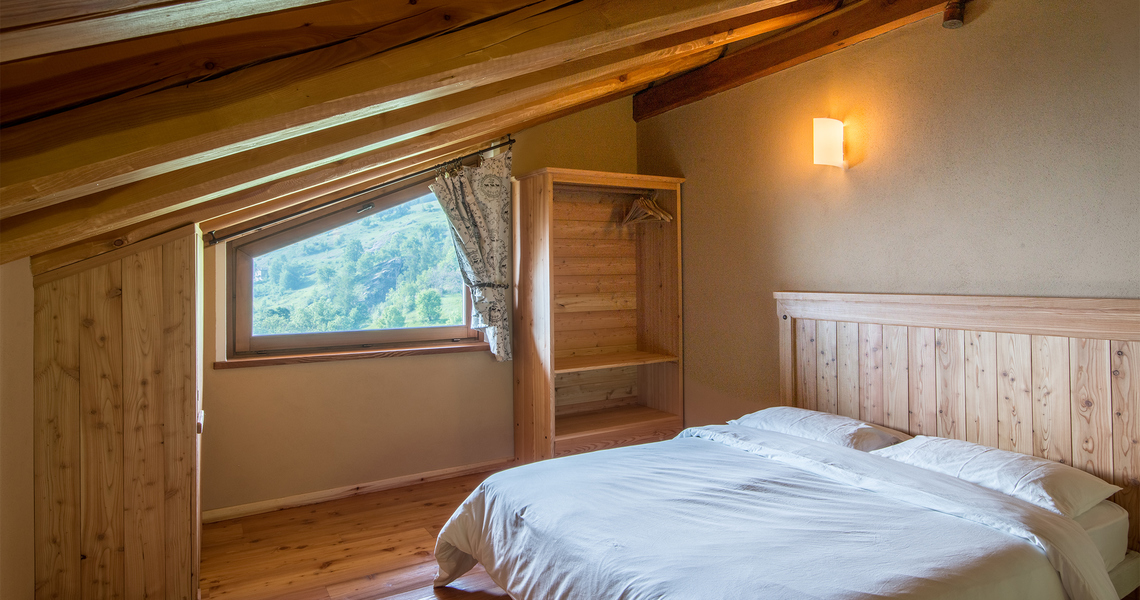 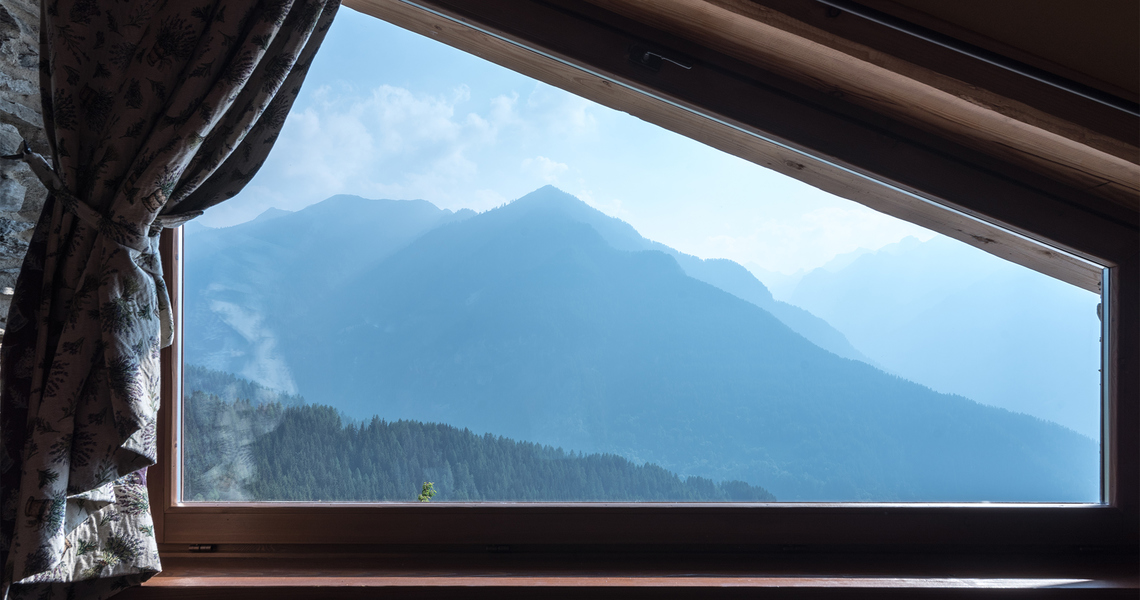 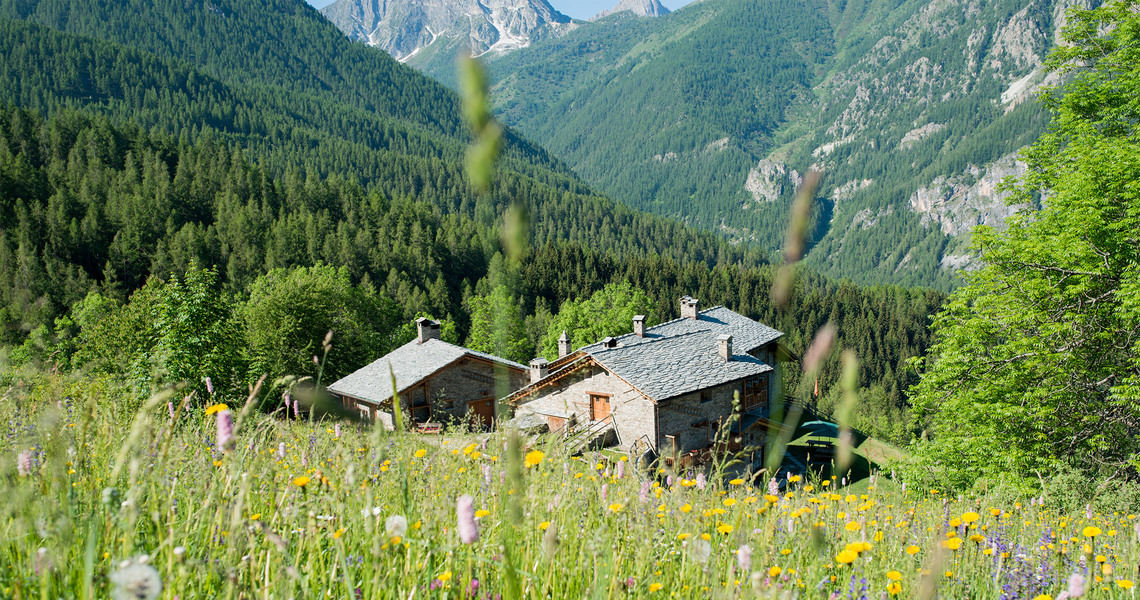 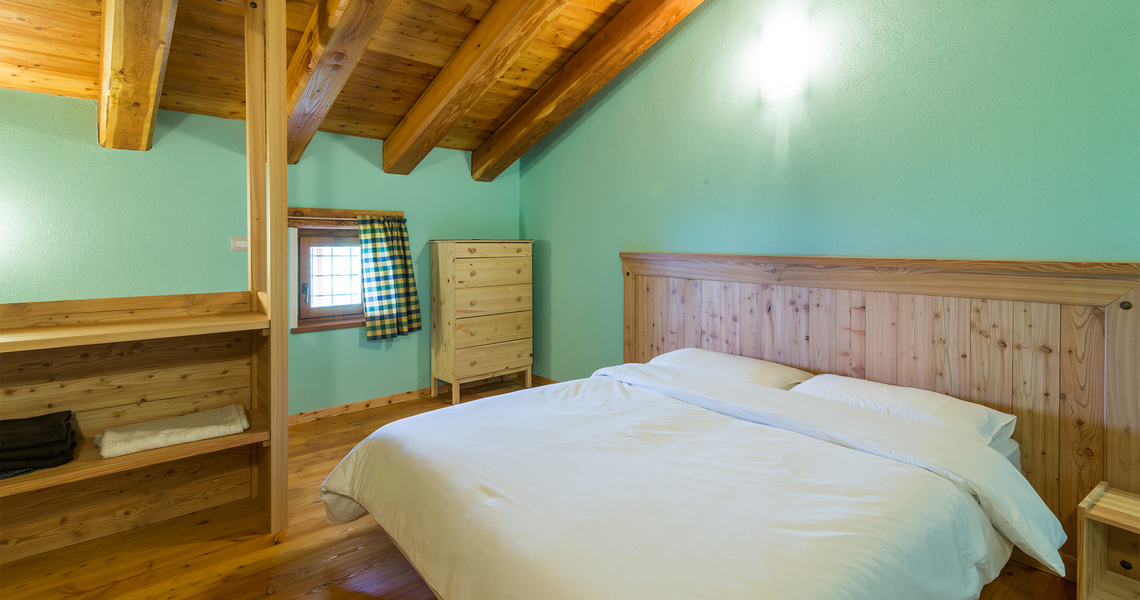 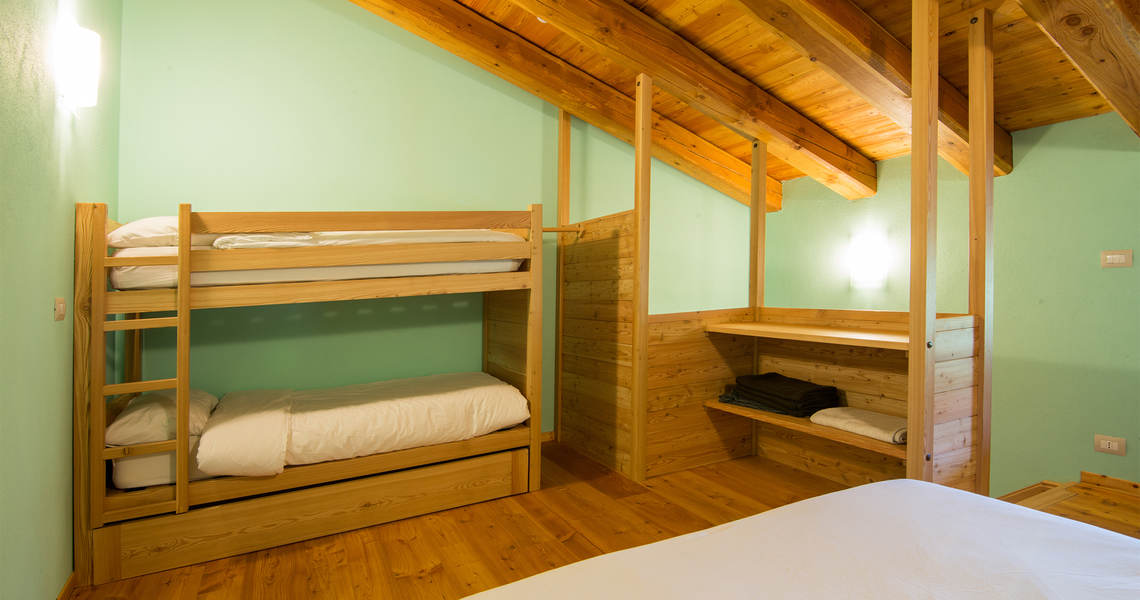 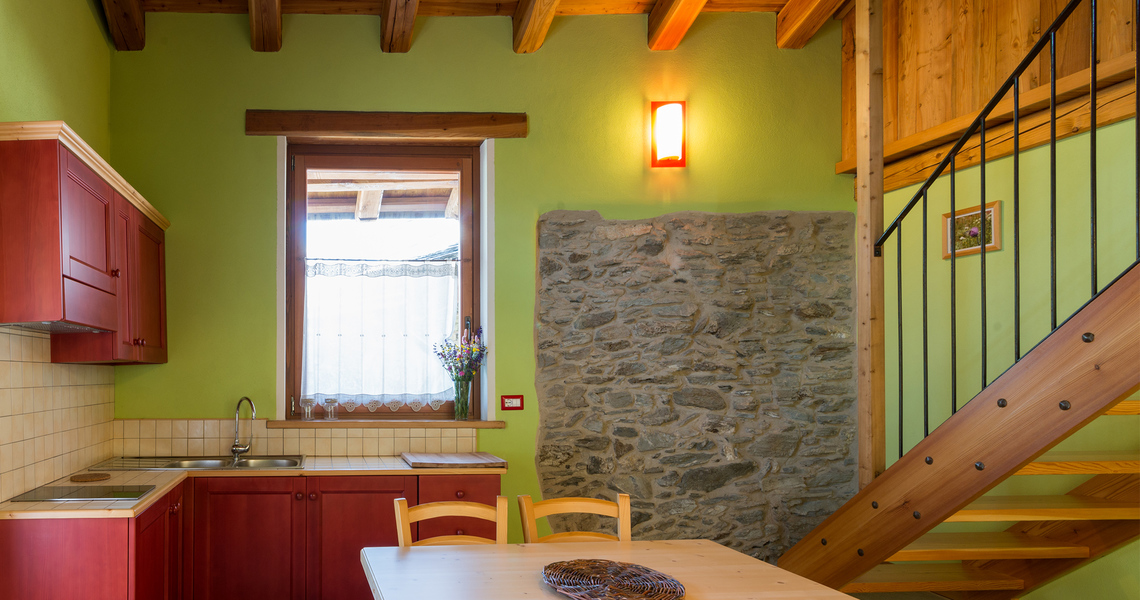 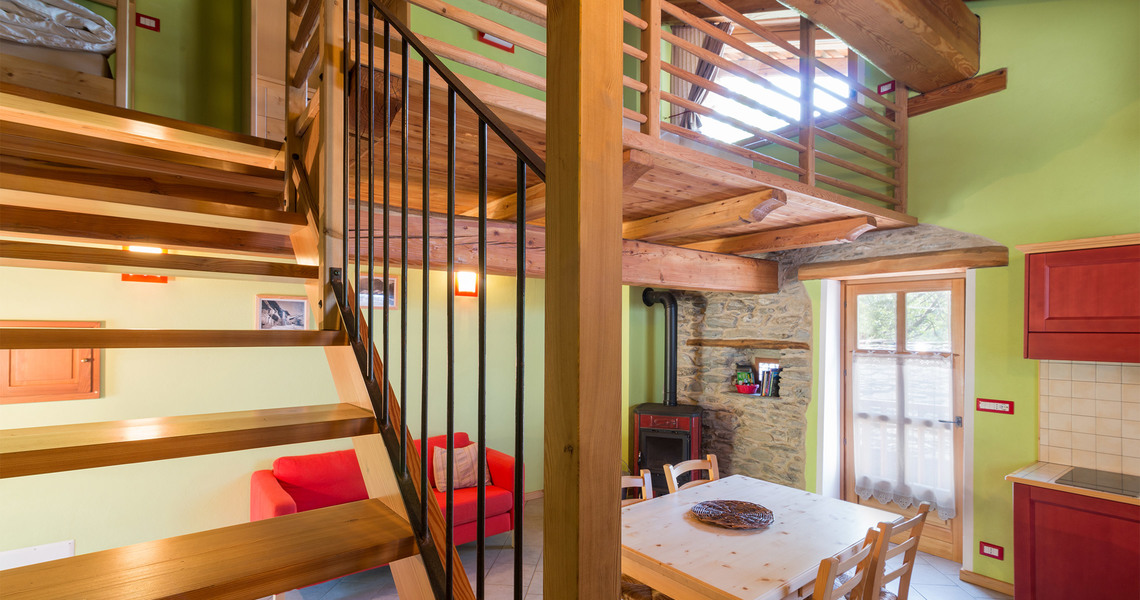 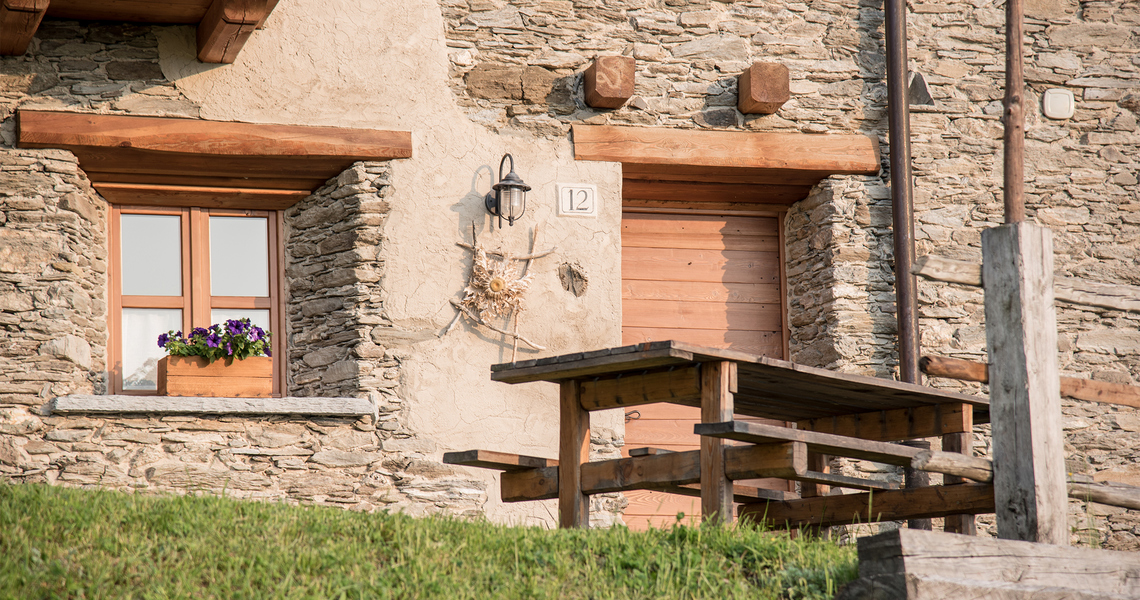 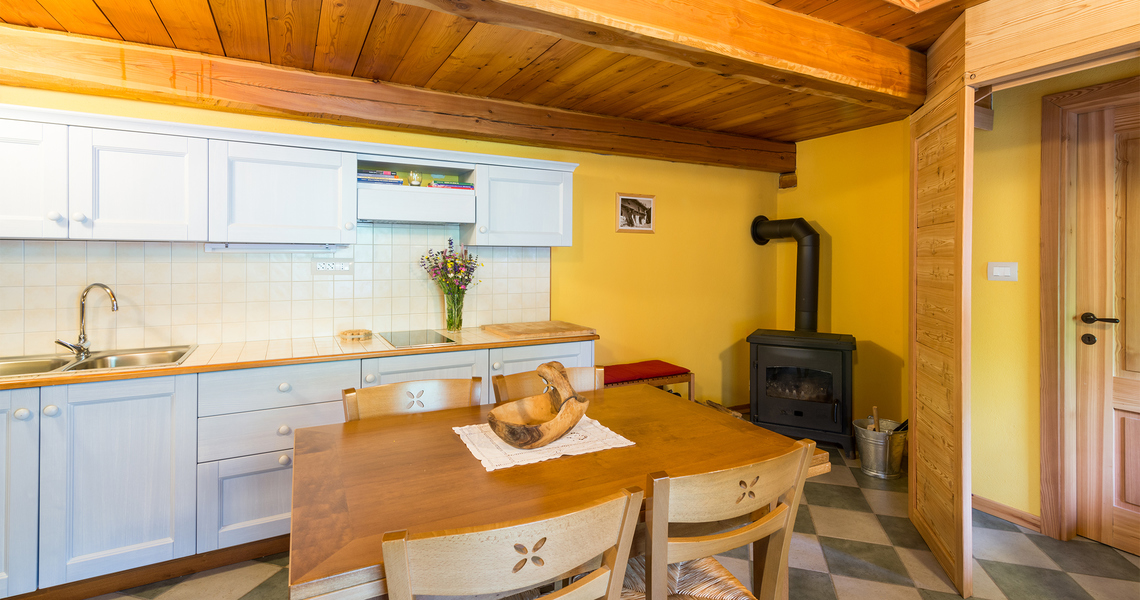 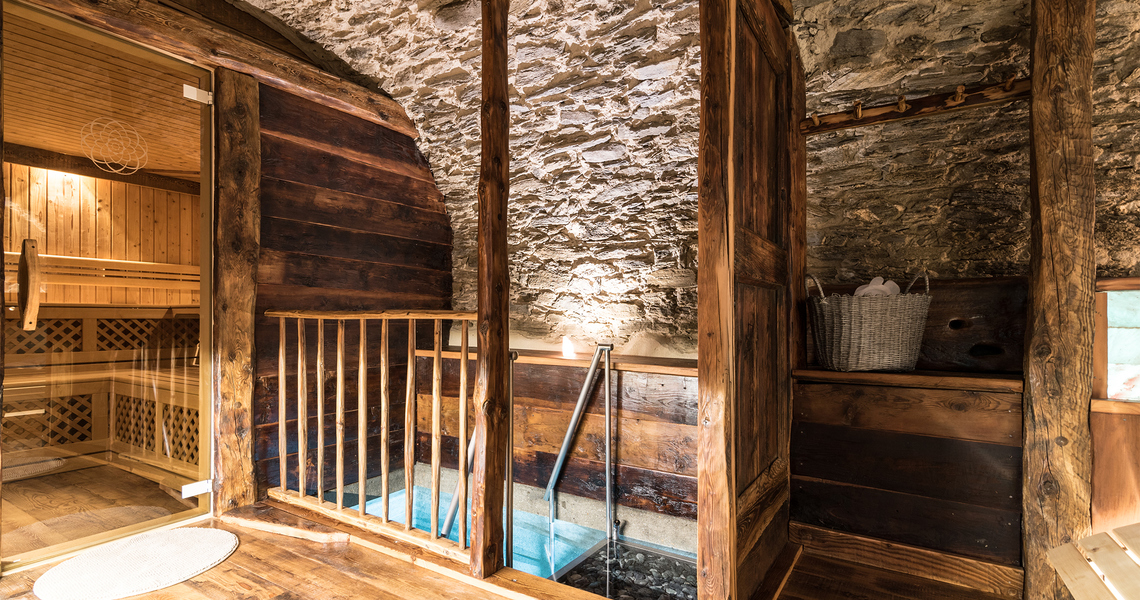 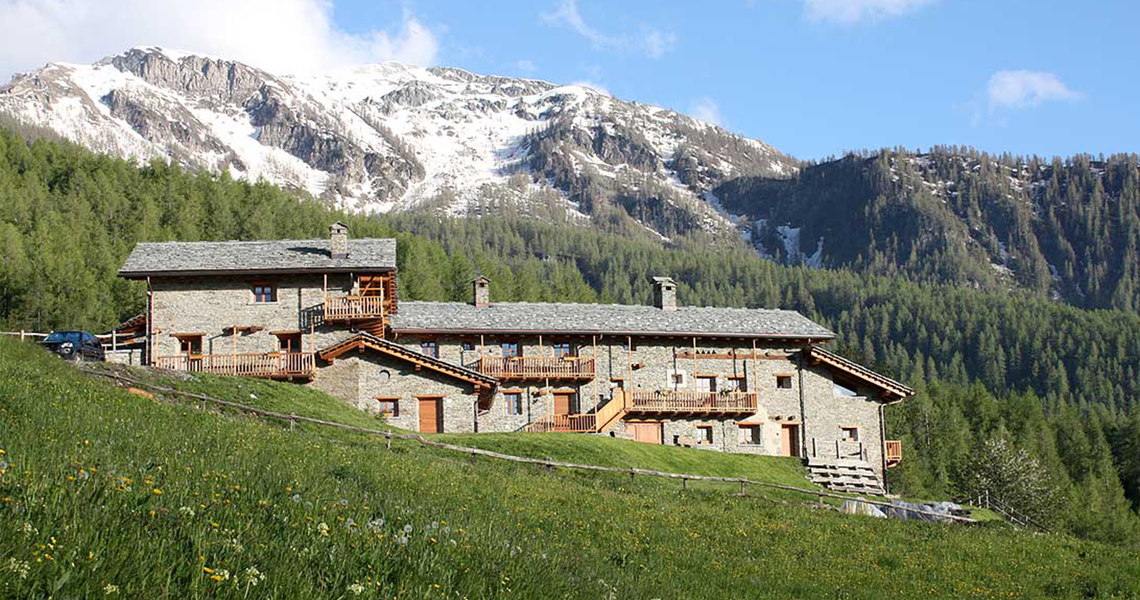 Up in the mountains of Piedmont, the houses in the settlements are built as tightly as one another, like sheep, which protect themselves from the weather and attackers by crowding together. This construction certainly protected its inhabitants to some extent from predators, cold weather and wild animals, until they were driven to poverty in the big cities in search of a better lot. And their houses and entire settlements were left behind.

This also applies to the small hamlet of Sagna Rotonda, which slowly decayed for decades until Teresina and Giovanni discovered it in the early 2000s and all the buildings were bought by the almost 20 different owners. In the course of a few but very busy years, the two have restored the mini-village true to the original and converted it into an “Albergo Diffuso”, which is becoming increasingly popular in Italy and elsewhere. Nine apartments, nested in the different buildings, each with their own bathrooms and kitchens and their own entrances, have been rented out since 2012. Common areas are the meadows around or the large group room where yoga and other courses can be offered.

The operators of Sagna Rotonda are very active members in the association for the promotion of ecologically sustainable tourism in the Valle Maira. Among other things, this valley, which has been almost completely depopulated by centuries of rural exodus and also the entire surrounding region, is now and still very tentatively developing into a newly discovered paradise for hikers and nature lovers far away from the large tourist crowds. Insider tip - still!

We also featured this accommodation on our blog at Five places for winter sports.

ArchitectureWith the help of experienced local craftsmen, Giovanni's family rebuilt the building ensemble, which dates from the 17th century, in the traditional style and with a lot of initiative. They mainly reused the old, still existing materials such as stones and wood and only obtained new stones and wood that were needed from the surrounding area. Only the cork for the roof insulation had to be brought in from Sardinia.

FoodDuring the high season there is a small restaurant within Sagna Rotonda where you can taste all the delicacies of the region. There guests can also get snack packages for excursions and hikes or pick up dishes and enjoy them in their own apartments. Soon there will also be a vegetable garden where guests can harvest themselves.

EnvironmentThe buildings have been restored and isolated in an ecological way. Electricity is generated by solar collectors, the heating system is operated with electric heat pumps, water is saved, minimally consuming lighting systems are used and waste is separated.

Well-BeingSagna Rotonda is in the middle of a completely untouched nature. Only one road leads here, which some might not even really want to call a road. And arrived at the hamlet: as far as the eye can see only mountains, forests, meadows and sky. And you can hear almost exclusively the rustling of the wind, the peaceful cows in the pasture and the roaring of fiery deer when the time is right. If you need additional relaxation, you can rent the small Finnish sauna exclusively by the hour. A former stable with a stone barrel vault was converted into a yoga / meditation room.

Sagna Rotonda is approximately 2.5 hours' drive from Turin (138 km). Milan is just under 4 hours away (256 km) and Genoa is around 3 hours (203 km). The exact address and directions can be found on the Sagna Rotonda website.

The sustainable traveler actually comes to Ponte Marmora by public bus (about 1 hour from Cuneo). From there, guests are picked up by Sagna Rotonda.