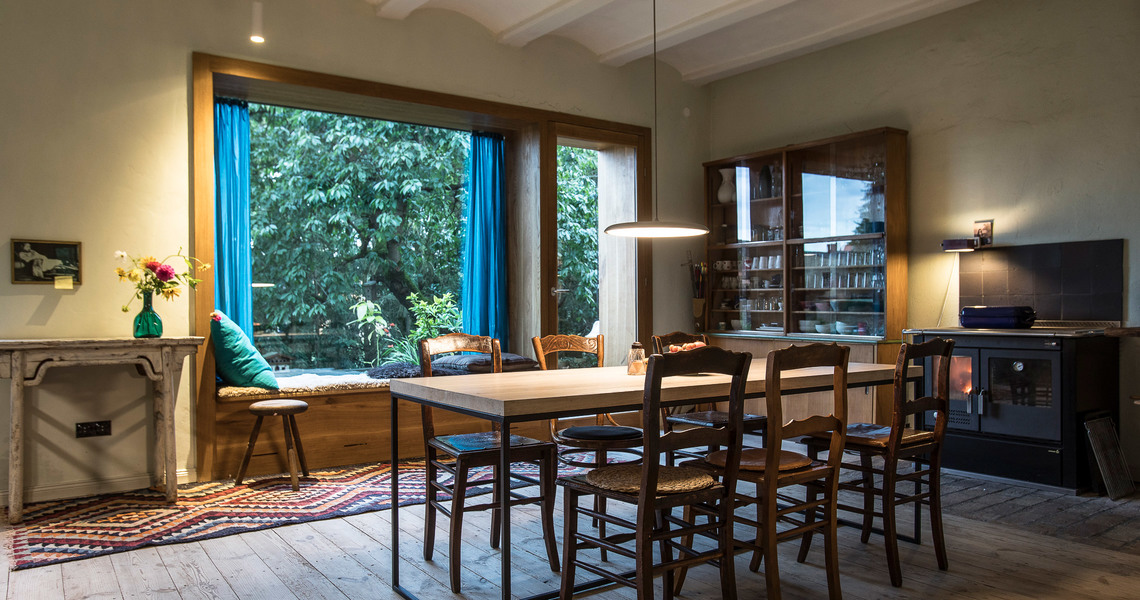 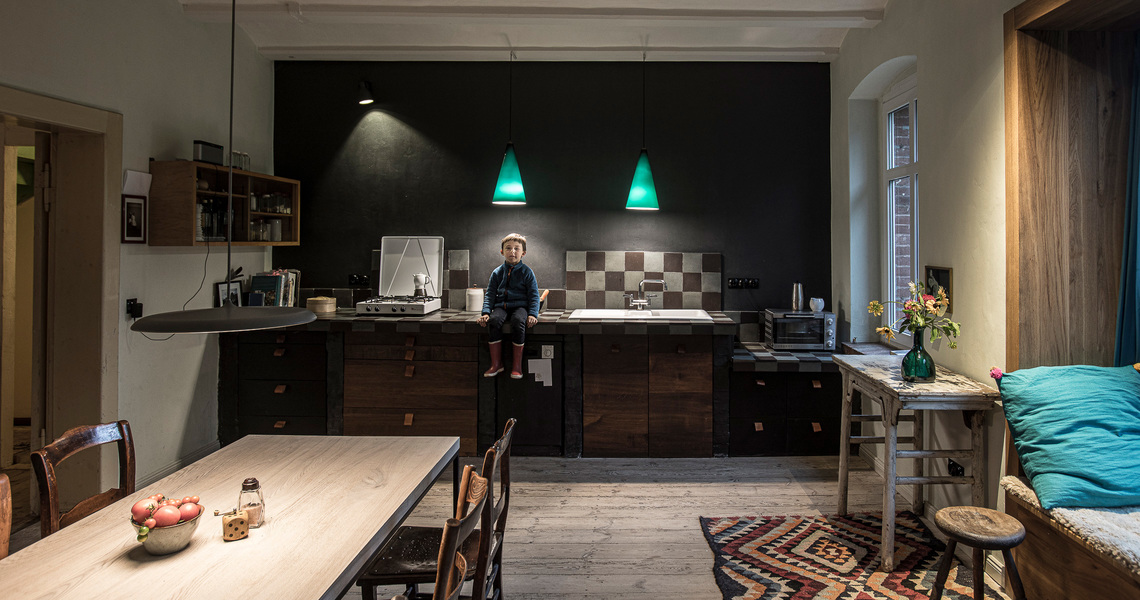 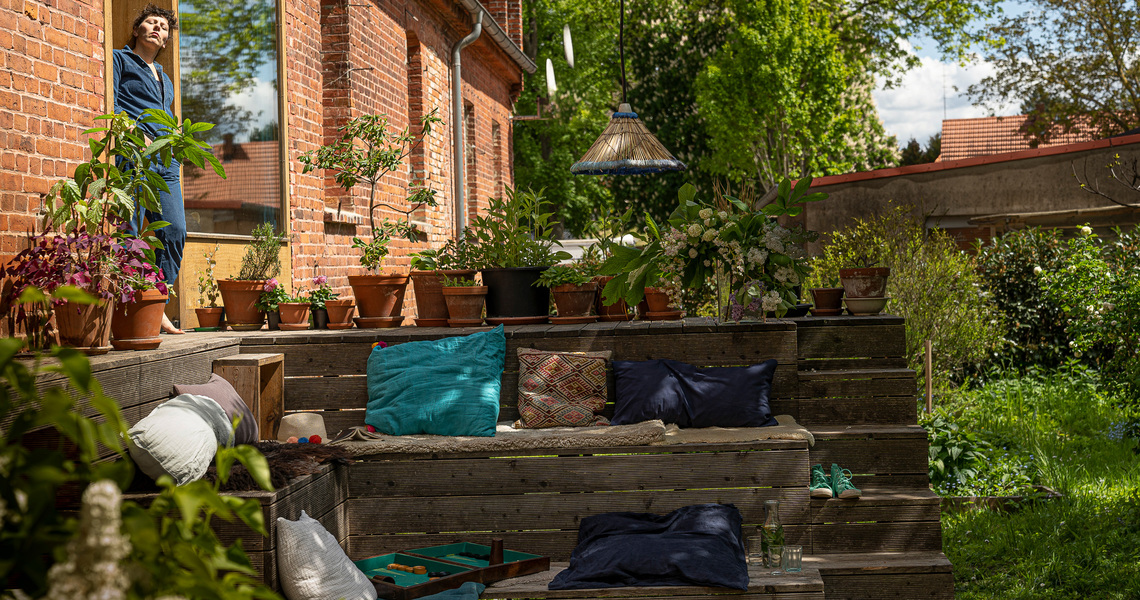 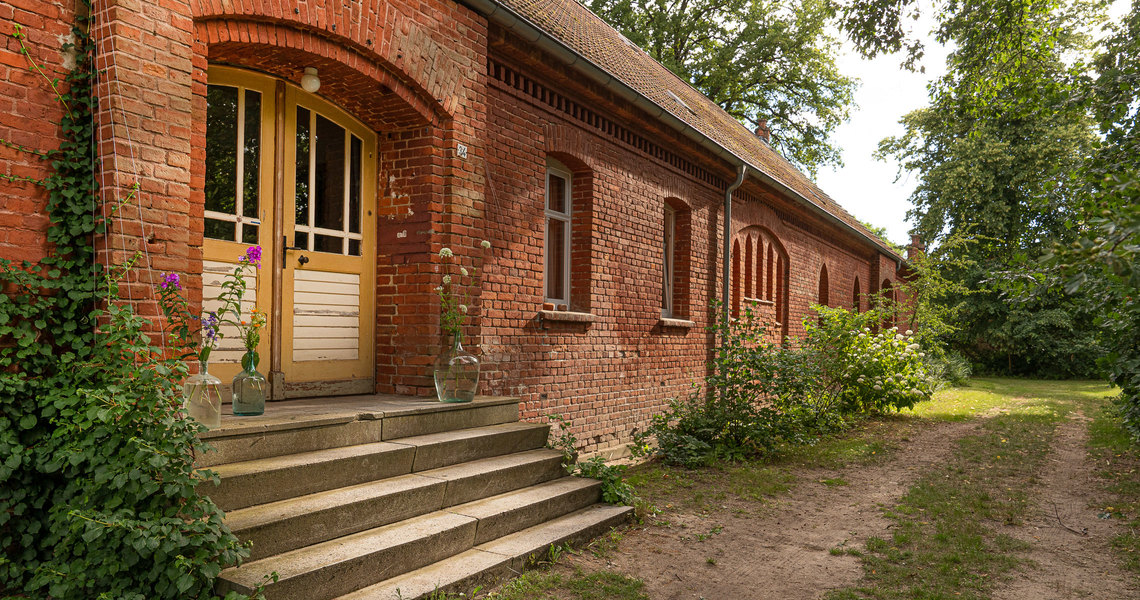 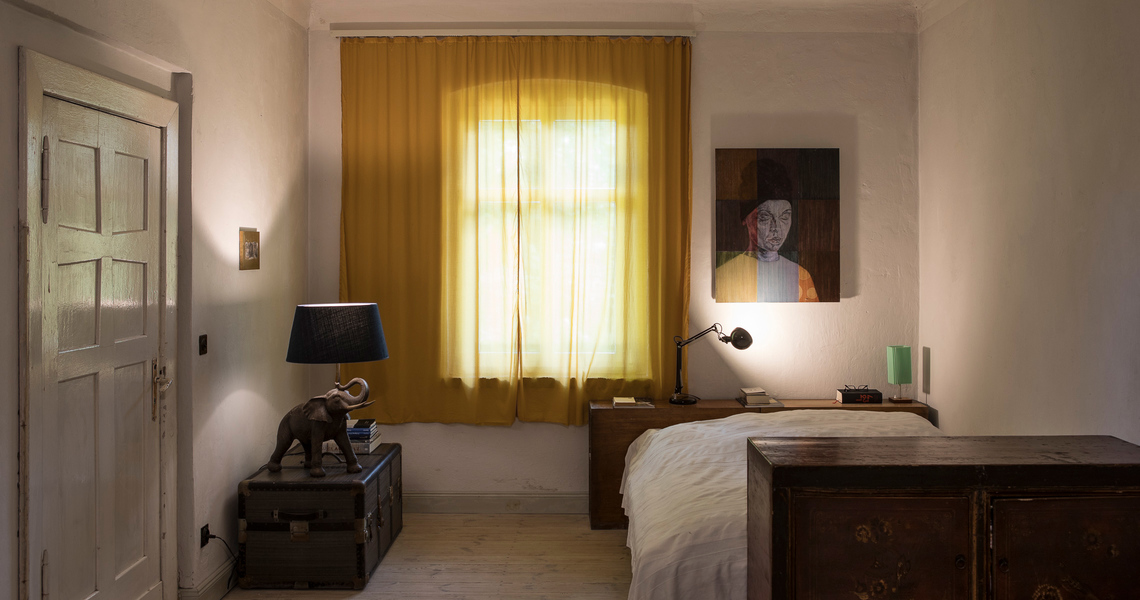 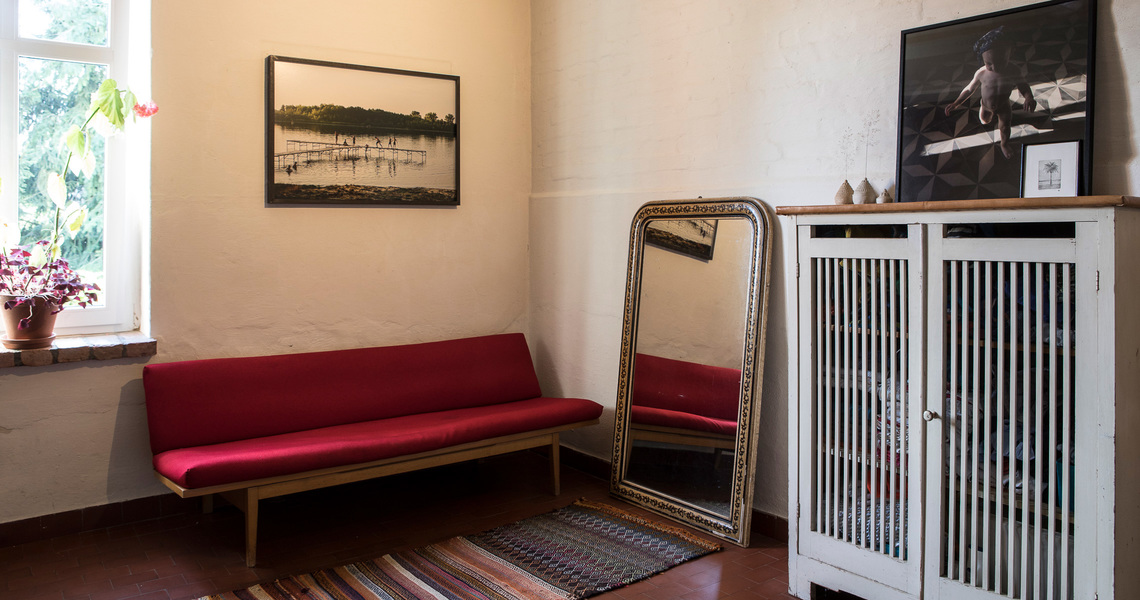 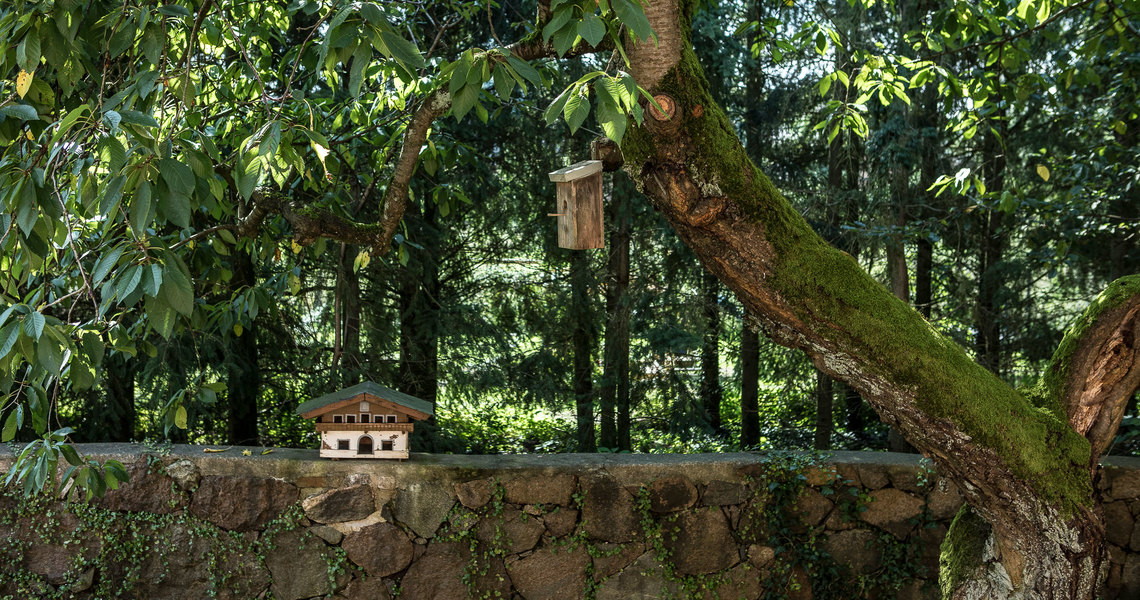 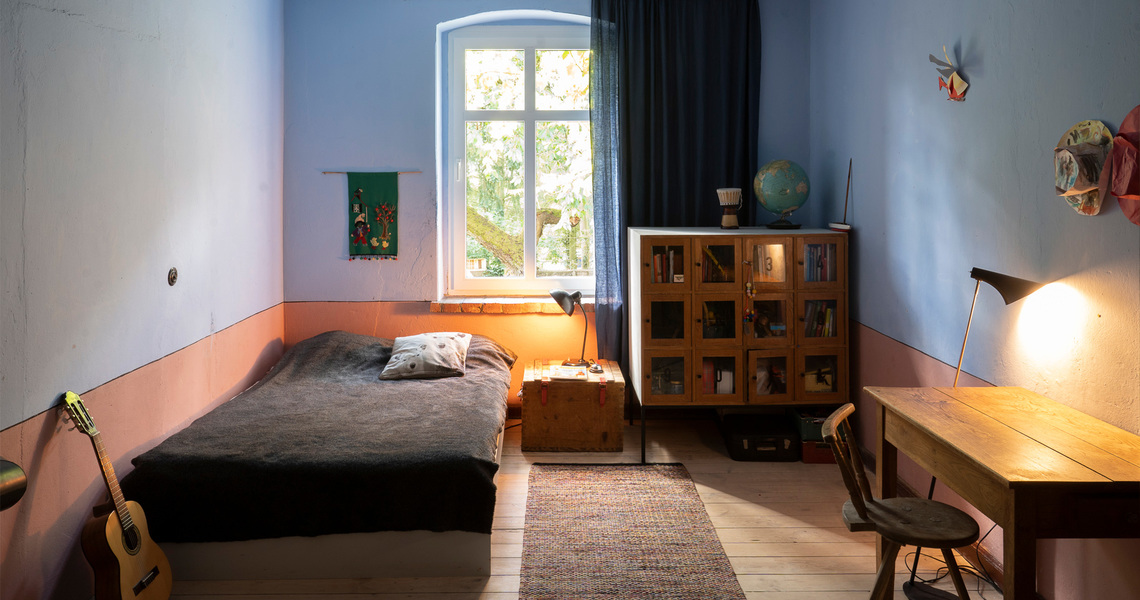 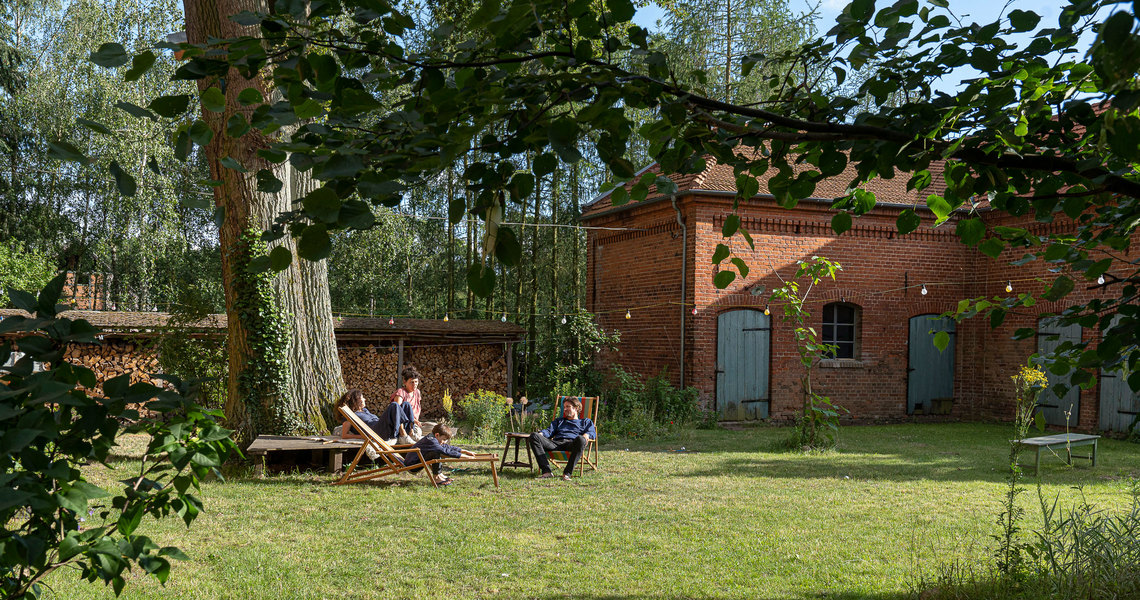 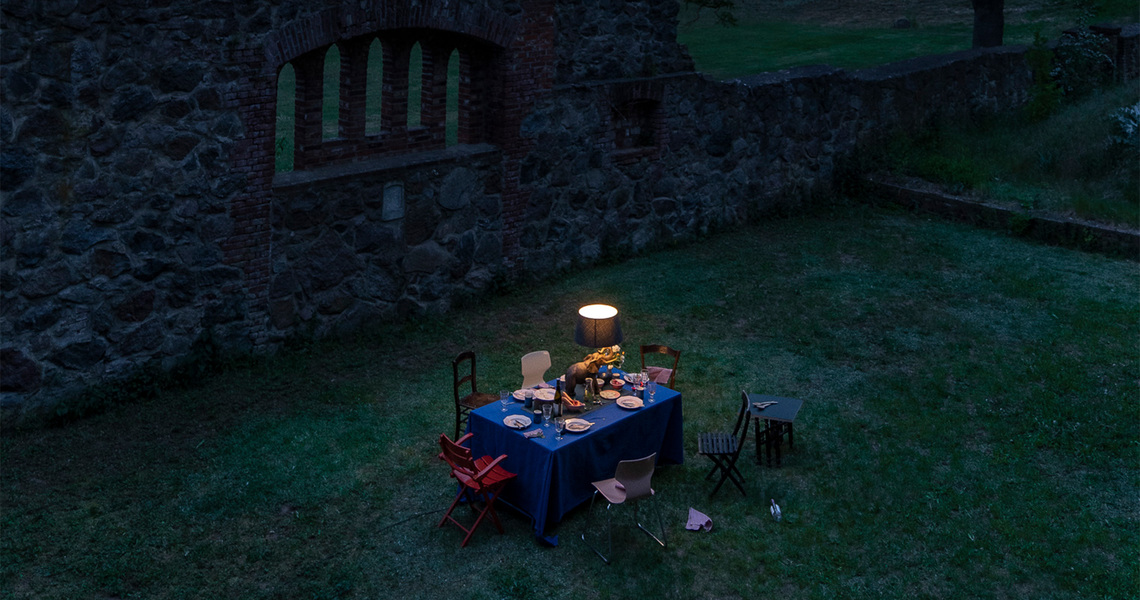 When you enter the house it is like coming to good friends who are on the go and have left a note "Feel at home", we will come back later.

On a nondescript former East German small town street you come to a very special holiday home. The listed brick building from 1860 is surrounded by large old trees and hides a secret under its roof. Because the rear part of the building, which was originally a stable, was converted to the Catholic chapel Maria by the angels in 1917. Including pointed barrel vault with angel head ornament. Today it is dedicated and serves as a huge living / meditation / play room for residents and guests of the former rectory.

And when you first enter the church directly from the hallway of the apartment, your mouth remains open for enthusiasm and awe. So it was with the current owners, a photographer and a designer, who discovered the building ensemble for themselves 10 years ago. They renovated it sustainably and carefully and comfortably furnished it with reused furniture. The highlight in the kitchen is the large upholstered corner in the panoramic window. And from the kitchen you go straight out onto the almost amphitheater-shaped terrace and the herb garden.

In front of the church portal, on the other side, the garden with a fireplace extends between the stallion stable and the barn ruins. An old rusty gate leads in between to nowhere over the fields and forests of the Prignitz region. The least densely populated area in Germany full of bikes and hiking trails and migratory birds. Here fox and hare say good night and deer come to visit.

ArchitectureThe entire ensemble from around 1860 with different buildings made of bricks and field stone bases is a listed building. The former Catholic chapel Maria von der Engeln was transformed in 1917 from an original stable building into a chapel. It has a high cross vault and Gothic glass windows. The church and the rectory have played an important role in the public life of Döllen for several decades and have gathered believers from all over the region. It could also be opened to visitors again in the future if workshops, concerts or exhibitions are to take place here. The church and the rooms of the rectory were renovated in collaboration with local craftsmen and painted with historical chalk / glue paints or lime paints.

FoodThe kitchen is large and fully equipped. In the surrounding region there are several small farm shops selling vegetables, fruit and also meat and sausages. A cheese dairy in the neighboring village. Many herbs grow in the garden that guests can harvest.

EnvironmentOnly historical building materials such as lime and chalk paints were used to renovate the house. The walls are unsealed and breathable. Floors are made of wood or cement tiles and are cleaned with Marseille soap. All main cleaning products are self-made. Garbage must be strictly separated and there is a compost heap on the orchard. The house is only heated with wood from the surrounding forests. There is a photovoltaic system on the roof

The train from Berlin to the nearest train station takes an hour. From there it is another hour by bike to MariaMaria

From the Brandenburg Gate, keep straight on the B5 on the country road until after 112 km turn right to Döllen. (Attention a lot of speed cameras)