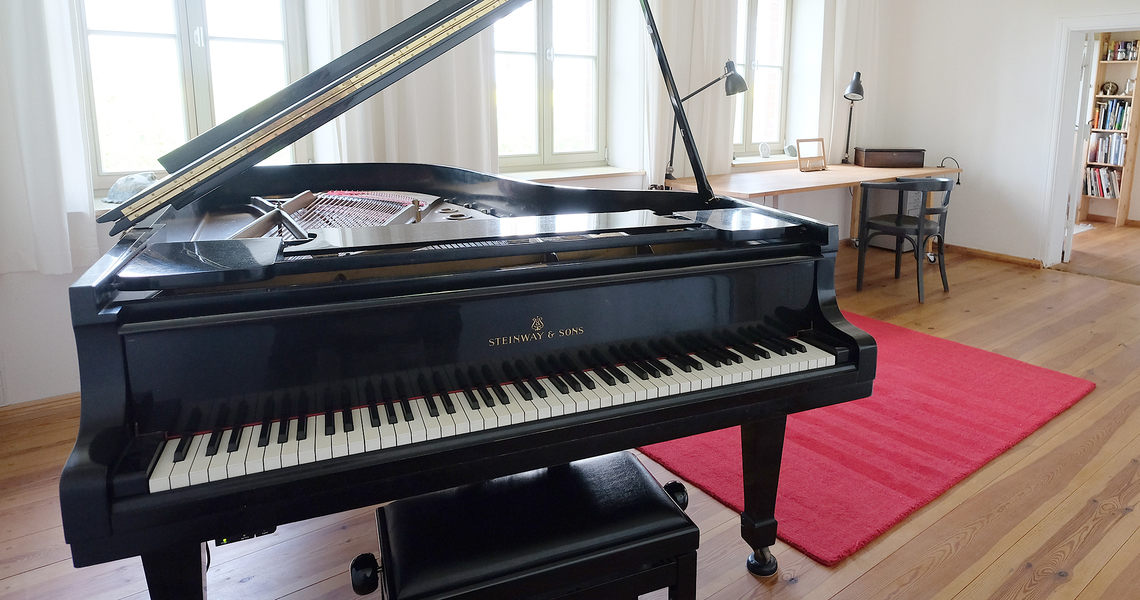 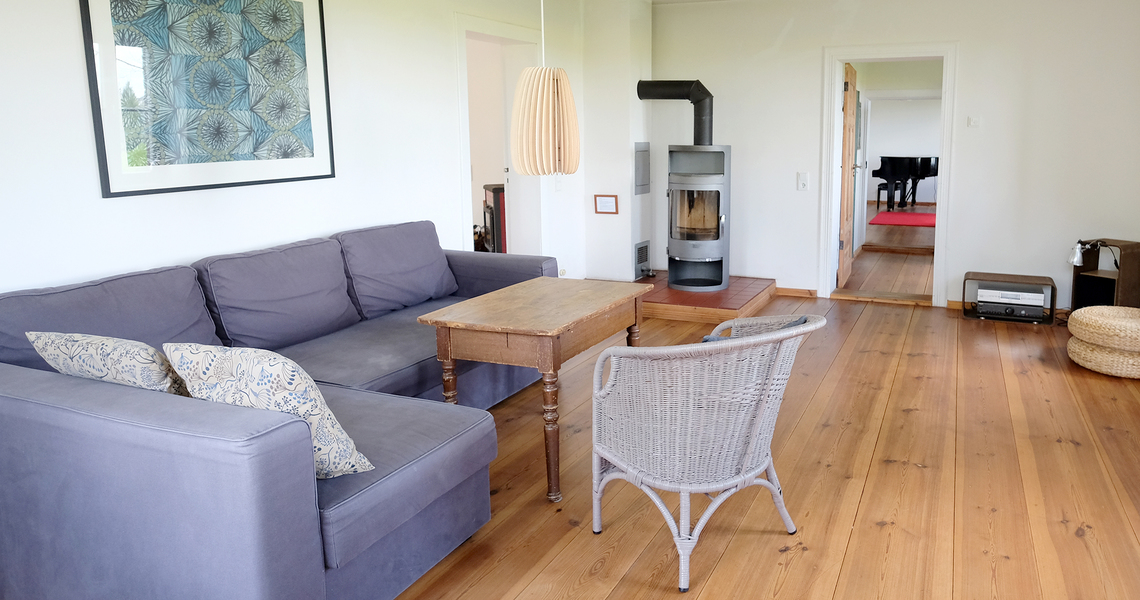 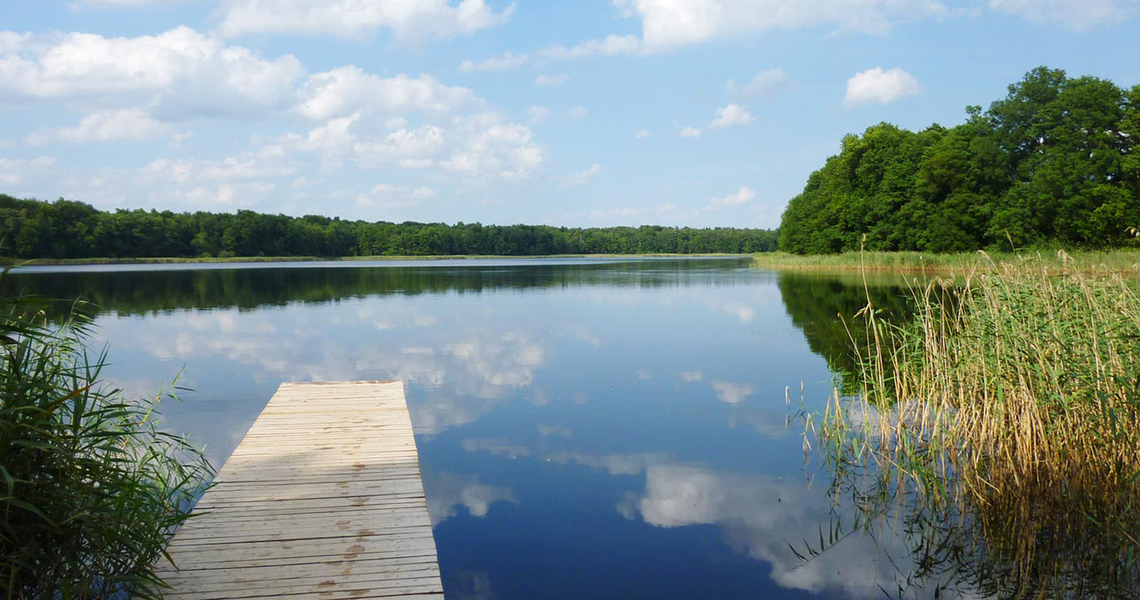 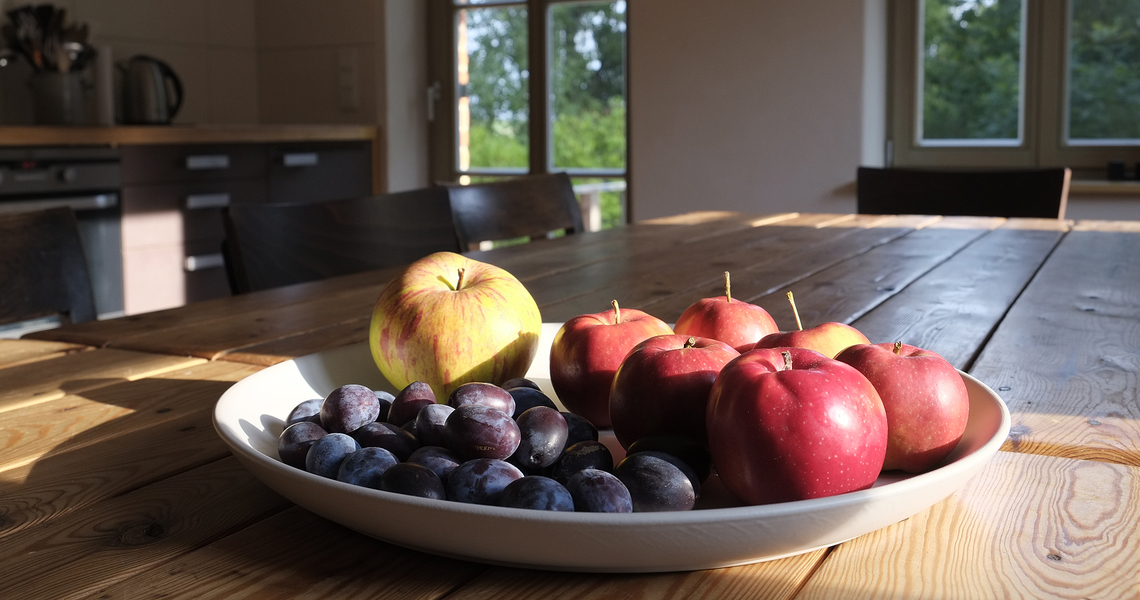 One of the most beautiful German landscape areas lies between the rivers Oder and Havel in northern Brandenburg: the Uckermark. Only an hour away from Berlin, stressed cities will find peace in the Landhaus Fredenwalde. During GDR times, people from the East Berlin artist scene came and went here and also drew the attention of the village youth at the time with their parties. Even after reunification, it was always a place for families and friends.

In 2003, the Berlin-based filmmaker Urs Cordua acquired the approximately 180-year-old brick house and lovingly renovated it from an ecological point of view. Wooden beams and planks, clay-plastered walls and two stoves for cold winter evenings characterize the cozy atmosphere of the holiday home. A special highlight for music lovers is the restored Steinway grand B-211 from 1938, which can also be rented. Some bands have already recorded CDs here.

The spacious house offers space for large families or groups of friends with five guest rooms. The recovery begins immediately when you walk up the path to the house. The country house is beautifully situated on the edge of the village, on the slope of a 111-meter-high vineyard - one of the highest elevations in the surrounding area. From there you have a wonderful view over the village and the green meadows. Urs Cordua has attached a swing between two trees up on the slope. Anyone who dares to climb up here feels a little bit like flying.

In the large, wild garden, insects chirp and the birds chirp. There are numerous beautiful places to sunbathe and read. In the middle is a sauna, which also ensures well-being. Numerous long and short hiking or cycling tours through the biosphere reserve and to the many swimming lakes in the Uckermark begin right in front of the house. You can safely leave the car, because you only need it for shopping. If you want to explore the surrounding towns, you can visit a variety of historical sights in Templin or Angermünde.

ArchitectureWhen Urs Cordua took over the house in 2003, it was technically up to date from 1828. There was nothing new except a power and a telephone connection. A wall tipped over and much had gotten old, but the house was dry and above all not broken down. As part of the gentle renovation, as much of the old substance as possible was preserved in the house. The house was provided with capillary-active and breathing interior insulation made of silicate panels, which was plastered with clay. The heater is hidden in the walls. The colors and oils used are biodegradable. The craftsmen involved in the renovation all came from the area; many of the materials were also purchased regionally: the planks, for example, come from Lychen. The interior is dominated by wide Brandenburg wooden floorboards and open beams. The interior is rather simple. Much of the furniture is found or self-made. The prevailing atmosphere is bright, spacious, woody, warm and cozy.

Well-BeingThere is a wood-fired sauna in the garden. During the break between saunas you can look at the starry sky on the lounger and hear the wind whispering in the tree tops.

From Berlin you drive a good hour to Landhaus Fredenwalde (97 km). From Hamburg you drive about 3 hours 20 minutes (350 km).

The closest train station is in Wilmersdorf (near Angermünde). From there it is about 10 km to Landhaus Fredenwalde. These can be covered by taxi, bicycle or bus (via Alt-Temmen). You will receive the exact address and directions with the booking.