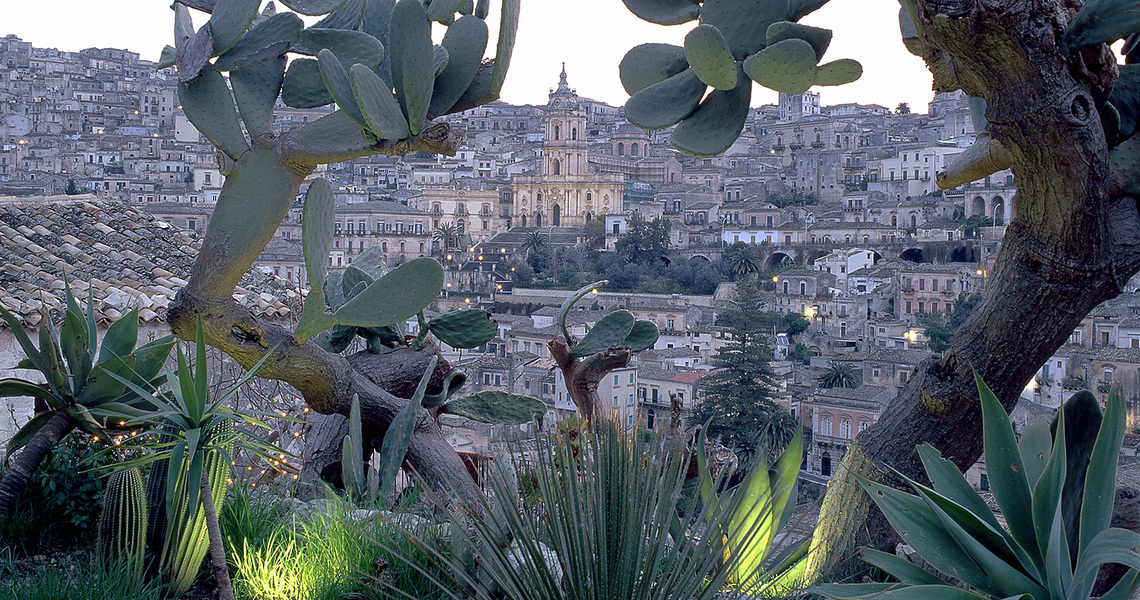 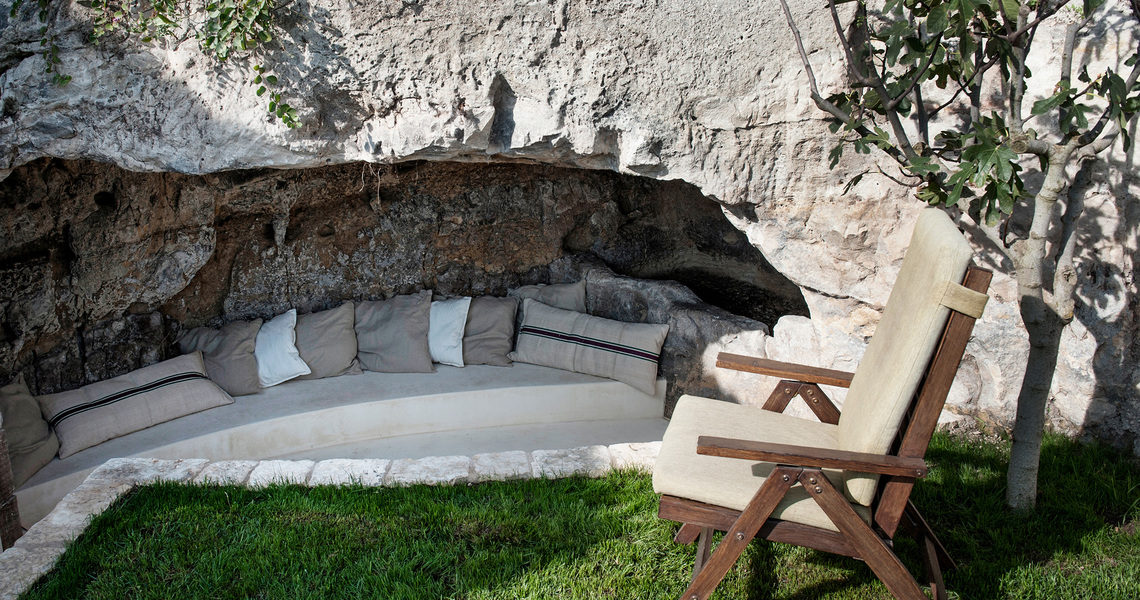 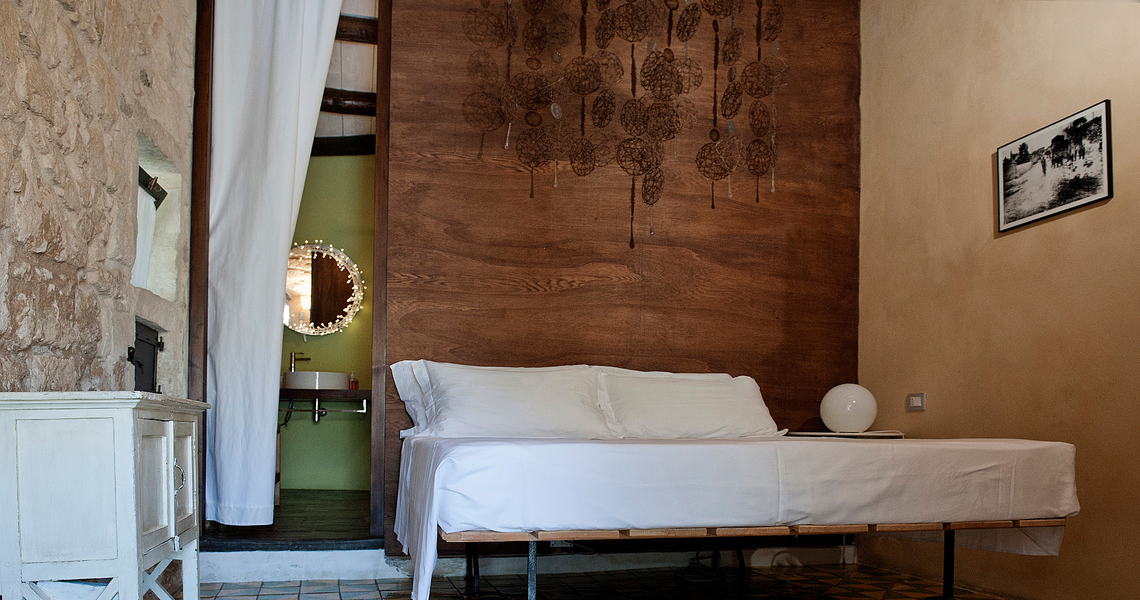 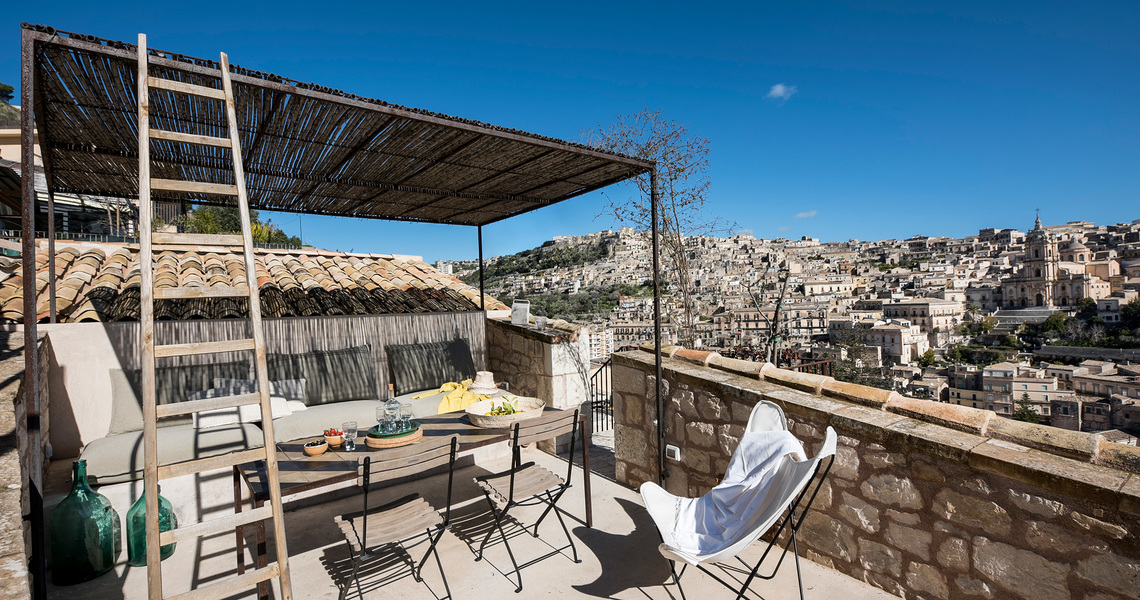 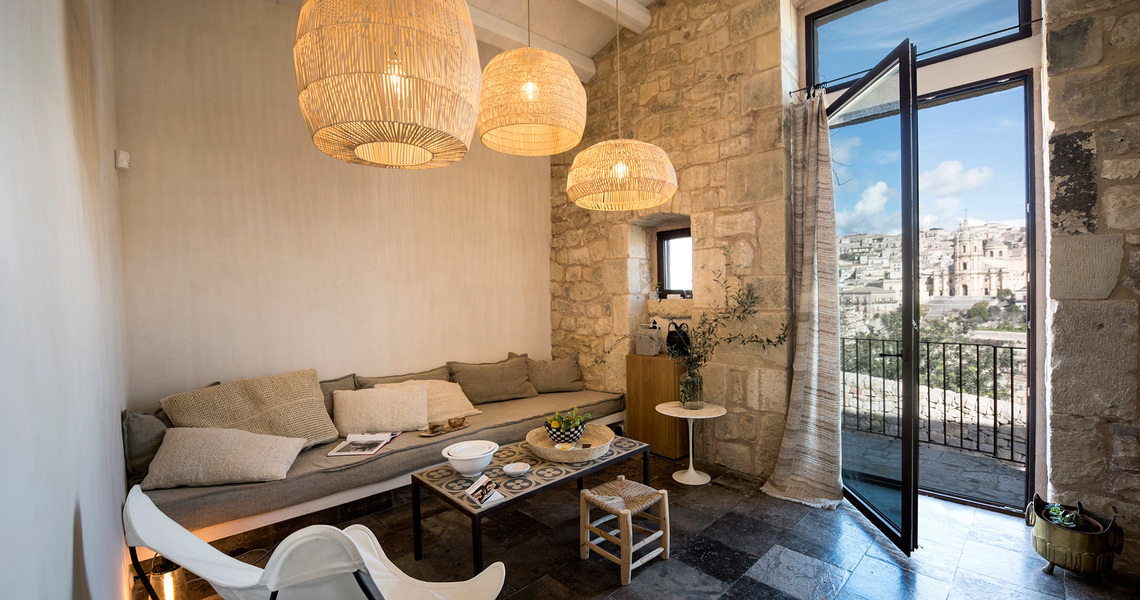 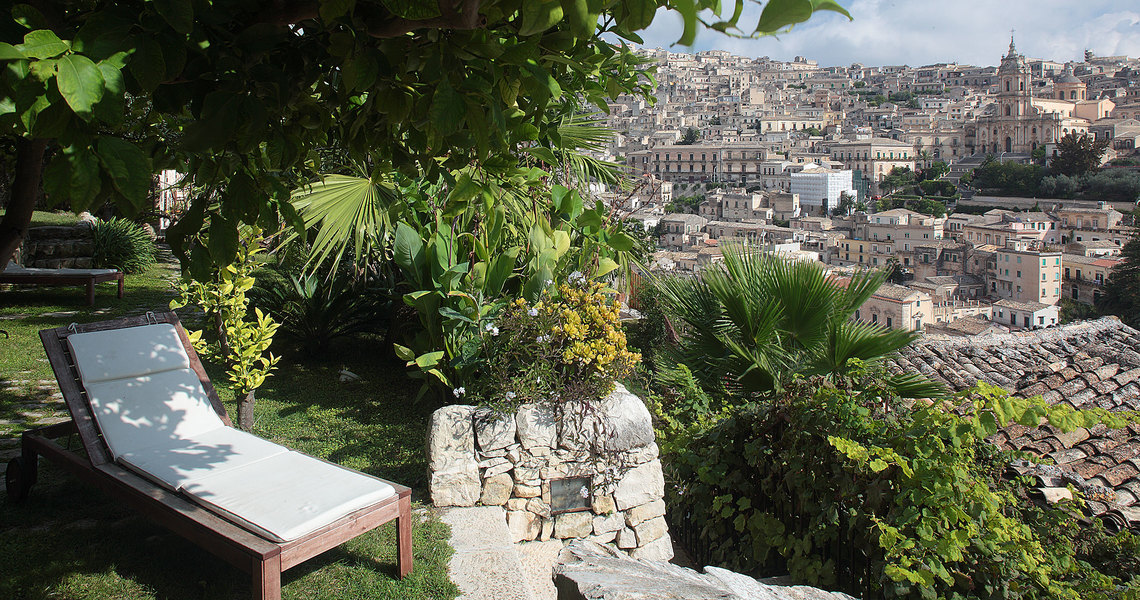 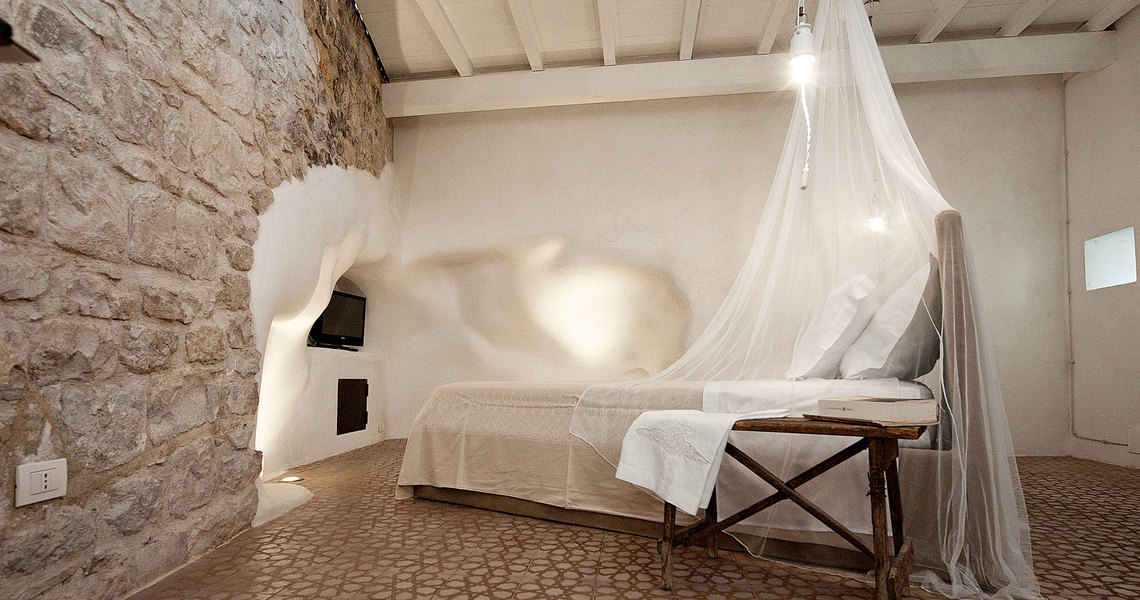 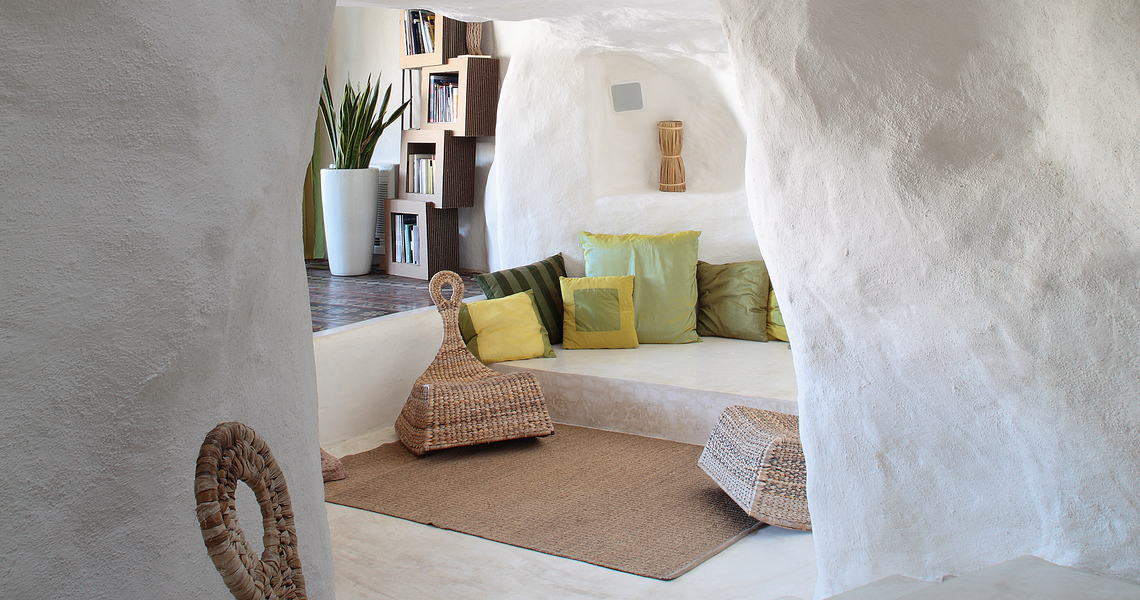 The Casa Talía is a so-called Albergo Diffuso, ie a "scattered" hotel, in which the individual rooms or apartments are located in a district or a village and not all in the same building. In this case, the rooms are grouped on different levels in the former ghetto of the city of Modica, which is a UNESCO World Heritage Site.

The old Hebrew quarter with its narrow, winding streets and small, nested houses, like so many similar towns all over Italy, had been almost completely abandoned since the 1960s and was left to decay. Down here, far south, Viviana Hadda and Marco Giunta were drawn from the big city of Milan. The couple of architects have lived here for over 15 years and, over time, have rebuilt or expanded their own house, as well as the rooms and cottages of Casa Talía, and, as one would expect from designers, do not lack imagination.

For example, there is a shower in the alcove or a lounge area in a white-washed cave scratched into the rock, which forms the back wall of an apartment. Stones bleached in the sun and many steps separate the different levels and rooms, which together make up the "Albergo Diffuso". Also from the parking lot, it is only a few meters, but a lot of stairs up to the accommodation. From here you have a wide view of Modica Alta and Modica Bassa with the many late baroque splendid buildings, churches and palaces.

ArchitectureThe rooms of the Casa Talía, which can be booked individually or in combination, used to be small single-family houses in which sometimes several generations lived together in one room. Through the careful reconstruction with the traditional materials available on site, the original, simple character of the houses has been preserved, supplemented by modern comfort. And so guests can experience the history and atmosphere of this old district in a special way.

FoodWhen the weather is nice, breakfast is served in the beautifully landscaped garden, where the tables are set up in the shade of the olive and pomegranate trees. The house specialty is a homemade muesli that goes perfectly with fresh yoghurt. The breakfast ingredients are all from the immediate vicinity, even the café is Modicano. There are freshly baked pastries and homemade jams made from the fruits of the in-house garden every day. Freshly squeezed Sicilian orange juice only from November to May when the oranges ripen in the area - a clear NO against imported oranges in summer! There are other seasonal fruit juices. Vegetarian and vegan meal requests can be fulfilled.

EnvironmentThe foundation of Casa Talía goes back to the longing for a more sustainable life. It's not easy to leave the big cosmopolitan city in the north to prepare a few small stone houses far down in the south. And so restoration and reconstruction have of course been realized with regional materials and ancient building methods. And environmental compatibility was also taken into account in the equipment. Shower taps with water pressure control, detergent and soap for refilling, partly reused furniture and materials - everything goes without saying here. And waste separation has always been practiced at Casa Talía long before the municipality officially introduced it. For understandable reasons, no solar panels are allowed in the Centro Storico, the old town, to generate your own electricity and hot water. Instead, the energy consumption in the Casa Talia is controlled with SmartHouse systems in order to achieve the lowest possible consumption with the highest possible effectiveness. A charging station for guests with e-cars is currently being installed.

Well-BeingSlow living is practiced in the Casa Talía and this way of dealing with yourself and your time should also be conveyed to the guests. Less is more. Good healthy food is good for people and the environment. If you like, you can get a massage. In the future there will be yoga and similar offers.

From Catania and Palermo it is possible to take the bus to Modica. The journey from Palermo takes around 5 hours, from Catania around 3 hours. Sicily can be reached by boat from Genoa, Livorno, Civitavecchia, Naples to the ports of Palermo, Messina, Catania and Pozzallo. You can find more information on how to get there on the Casa Talía website.