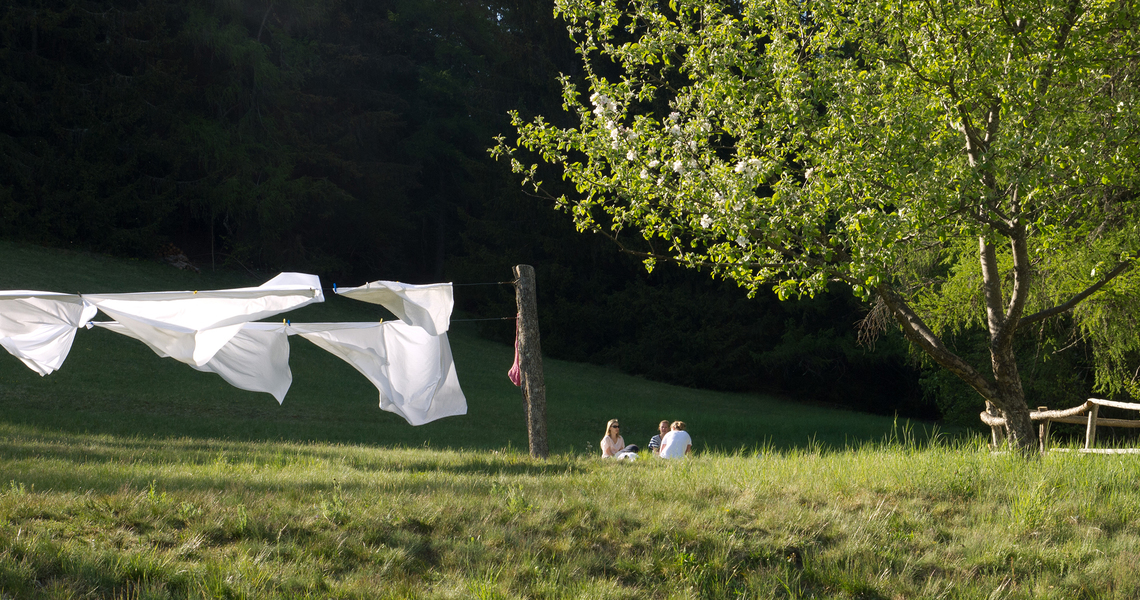 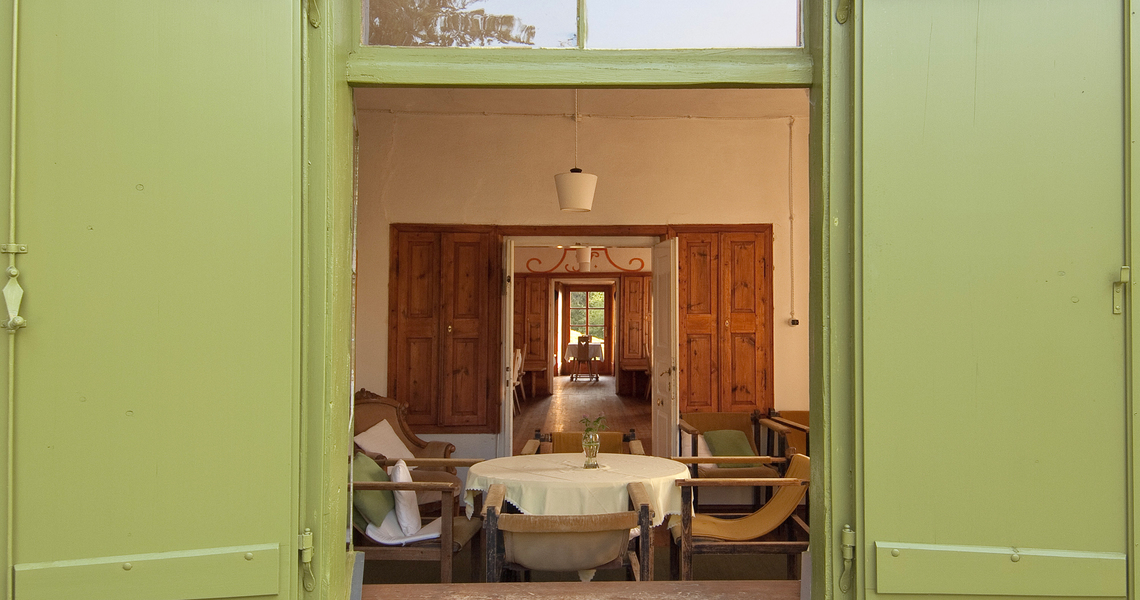 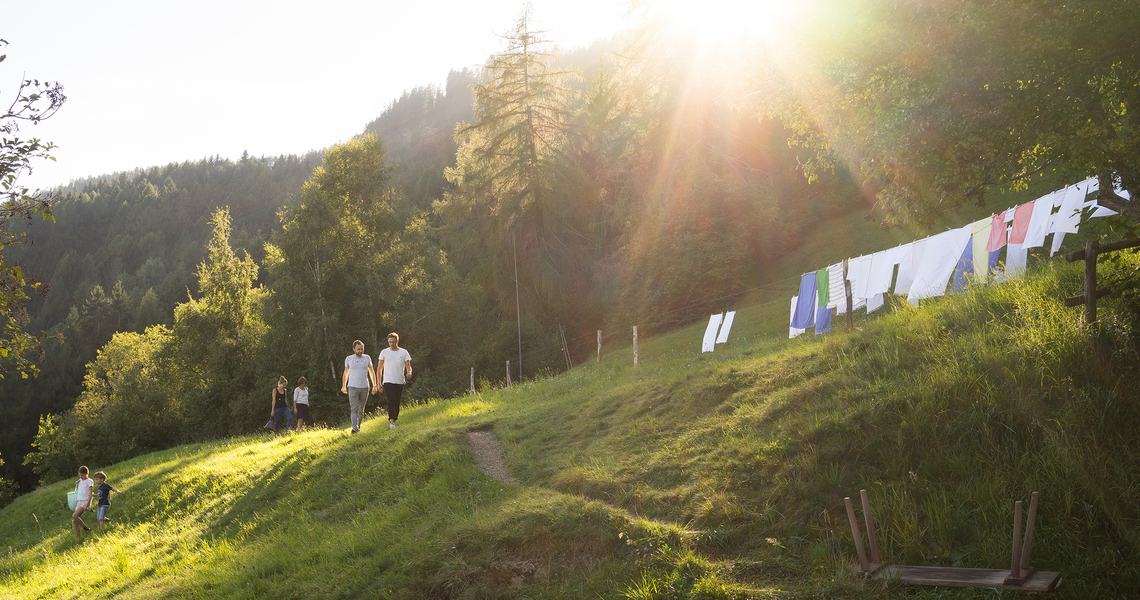 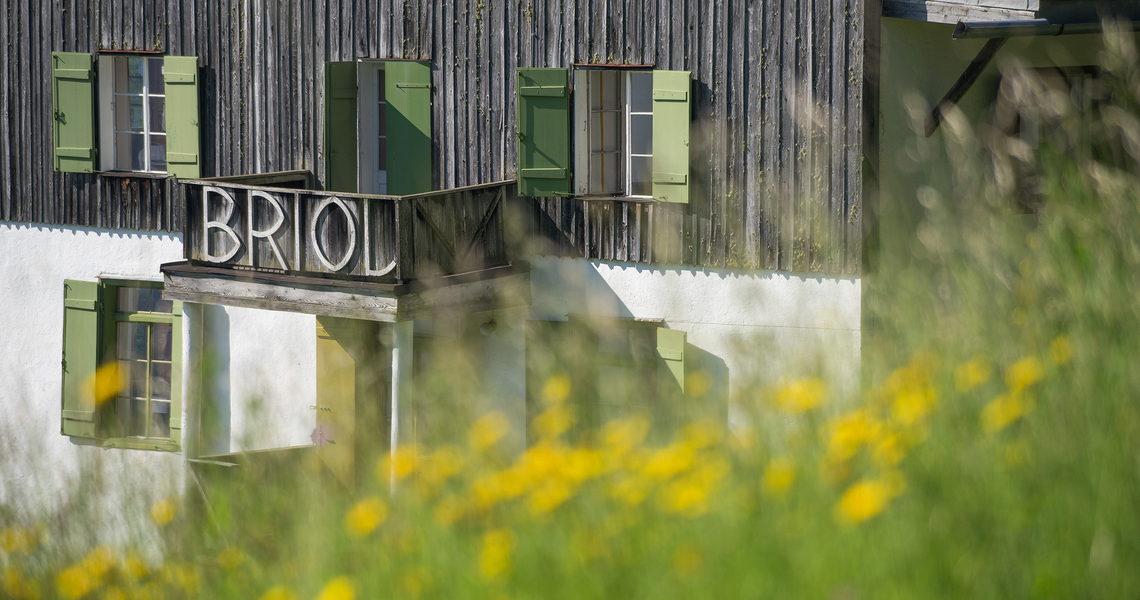 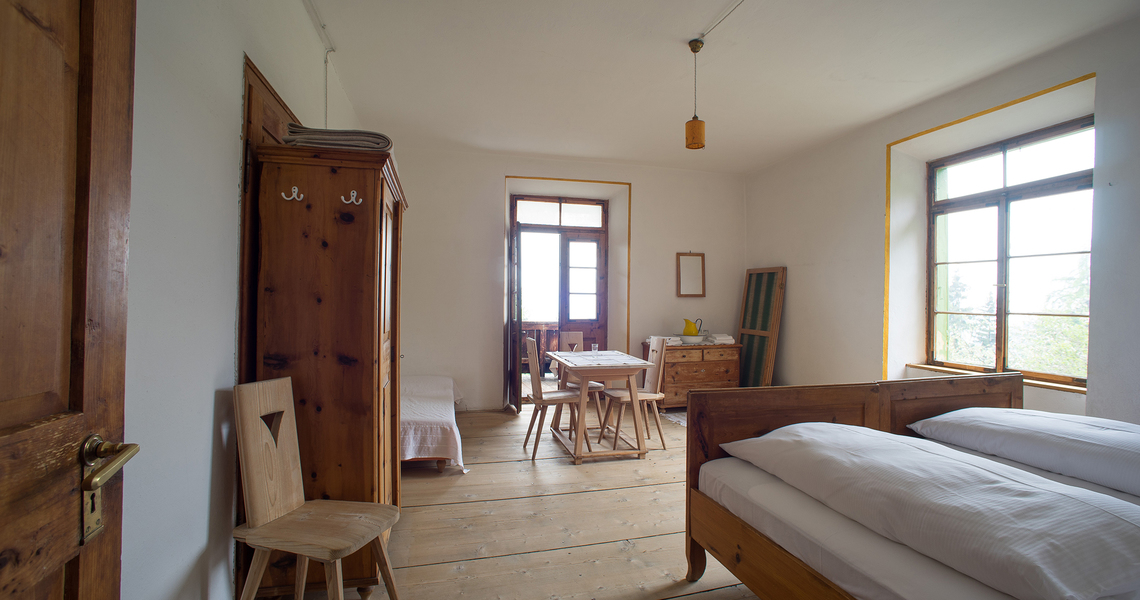 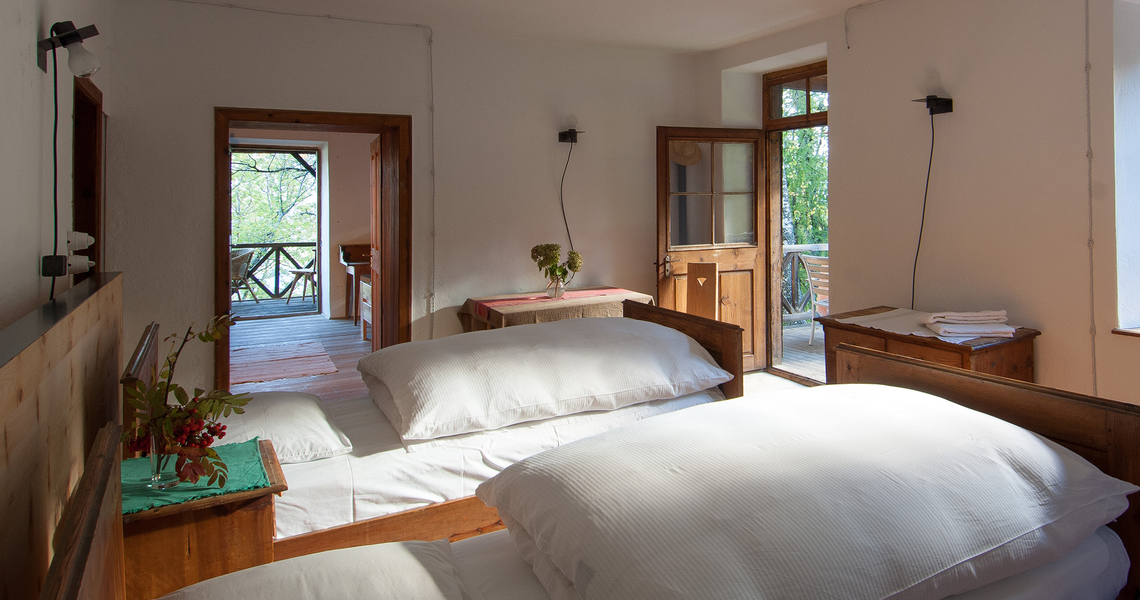 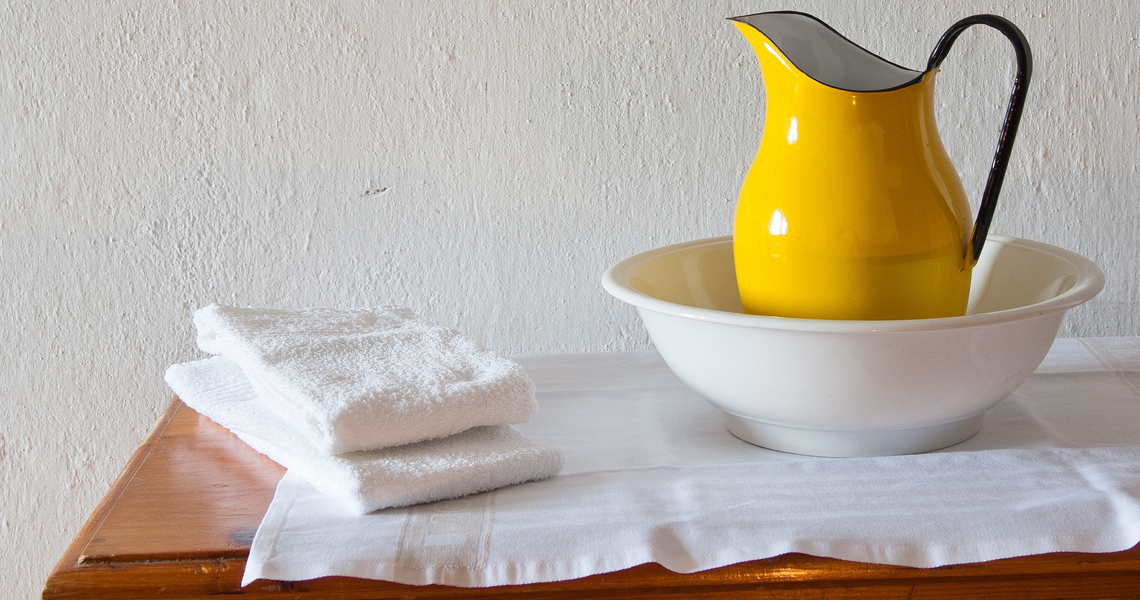 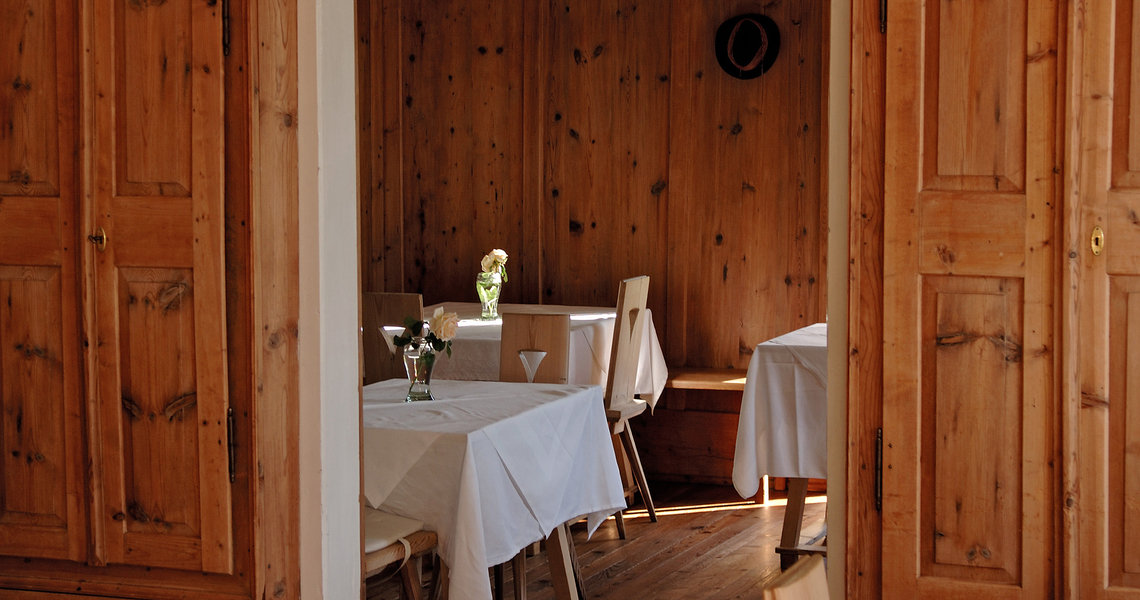 High above Dreikirchen in the Eisack valley are some houses in the green meadows, nestled on the slopes like swallow's nests, and those who have just made it up can enjoy a typical South Tyrolean summer retreat here, as cozy as a swallow in the nest. The Berghotel Briol consists of several houses that the Settari family have built on the mountain for several decades.

The driving force was Ms. Johanna Settari (1851-1931), the great-grandmother of the current owner. She wanted her husband to build a new plot of land on the "Berg" for the birth of each of her 15 children and had new houses built there for herself and all her descendants. In doing so, she laid down the rules for her beloved Briol that the property should only be passed on within the family, that no fences should be set up and that everything should always be preserved “in the spirit of the mountain”. Because their descendants followed these rules, Briol now has a unique idyll that reminds of old times.

Lush meadows, pristine forests, hiking trails, wide skies and fresh air can be found here at a height of over 1,300 meters. And all of this without car noise. Briol can only be reached by cobblers or, if necessary, by off-road taxi. In the main house in Briol, which was built in the Bauhaus style in 1928, everything is almost the same as it was then. Whitewashed walls, lots of wood, beautiful fabrics and original furniture characterize the interior of the house. The original wash bowls and jugs are still available for washing and there are sufficient showers and toilets per floor for shared use.

In contrast, the Settari house, which was built around the turn of the century, was carefully renovated by the current owner Johanna von Klebelsberg in 2013. There are three rooms accessible from the outside with a view of the valley. The rooms were named after the children of the Settaris who originally lived here. All are equipped with a bathroom, heating and a private terrace. There are also two other rooms in the Welzenbach Villa (each with their own bathroom and toilet) and a larger residential unit in the idyllic Mutterhäusl below Briol, which consists of a large room with a farm oven and cooking facilities and 2 bedrooms for a total of 4 people.

Meals are all taken at Haus Briol and are included in the price. There is a breakfast buffet, a fresh salad buffet at lunchtime and a three or four-course menu in the evening.

ArchitectureThe Ensemble Briol, which is now largely open to guests, is a historical place with history and stories. It has always been family-owned and consists of many different buildings, some of which are important examples of architectural history. The Welzenbacher Villa, for example, is an early work by the famous architect Prof. Lois Welzenbacher. And the briol was built twice. In 1898 it was built in the style of a Swiss house as an annex to Bad Dreikirchen. In 1928 it got its current shape when Hubert Lanzinger, a son-in-law of Johanna Settari, redesigned the house in the Bauhaus style, coordinating everything from the furnishings to the color scheme. And so the briol has been largely preserved to this day. Renovations and modernizations were carried out only very gently and always in style and with materials typical of the region.

Environment"Preserve everything in the spirit of the mountain" - Johanna Settari's third rule actually says it all. No superfluous technology in the rooms, the rooms cannot be heated, but simple hot water bottles are used for a cozy, warm feeling under the covers. The water is warmed up with solar cells or a wood stove and the pool is fed by mountain spring water.

Well-BeingThe summer freshness in the South Tyrolean mountains in Briol has a very special hint of the good old days, because the landscape and paths are unchanged, as is the simplicity of the accommodation, which is soothing to the eye. And above all, "the mountain" is still neither accessible by commercial roads, nor commercialized. All of this and the absence of TV, radio, Internet in the rooms means slowing down, finding your way back to yourself, peace and contact with untouched nature. A visit to the small forest sauna and a refreshing dip in the almost 100-year-old natural stone pool right next to it are also good for health and relaxation. In addition, yoga retreats take place regularly in Briol.

You can drive to Barbian by car. You can park your car there for the duration of your stay. From the parking lot you can either hike into the Briol (approx. 1 hour, almost 480 meters in altitude, luggage with the off-road vehicle on request) or you can take a taxi to the Briol.

At the Brixen / Bressanone train station, change to the local train to Klausen or Waidbruck. From there by taxi directly to the Briol.