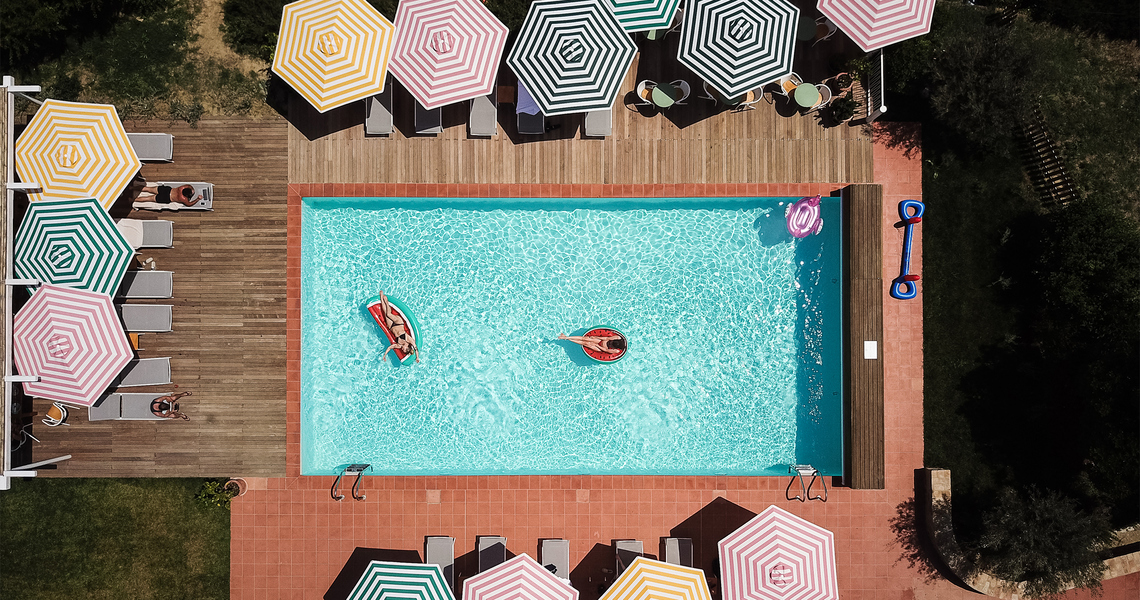 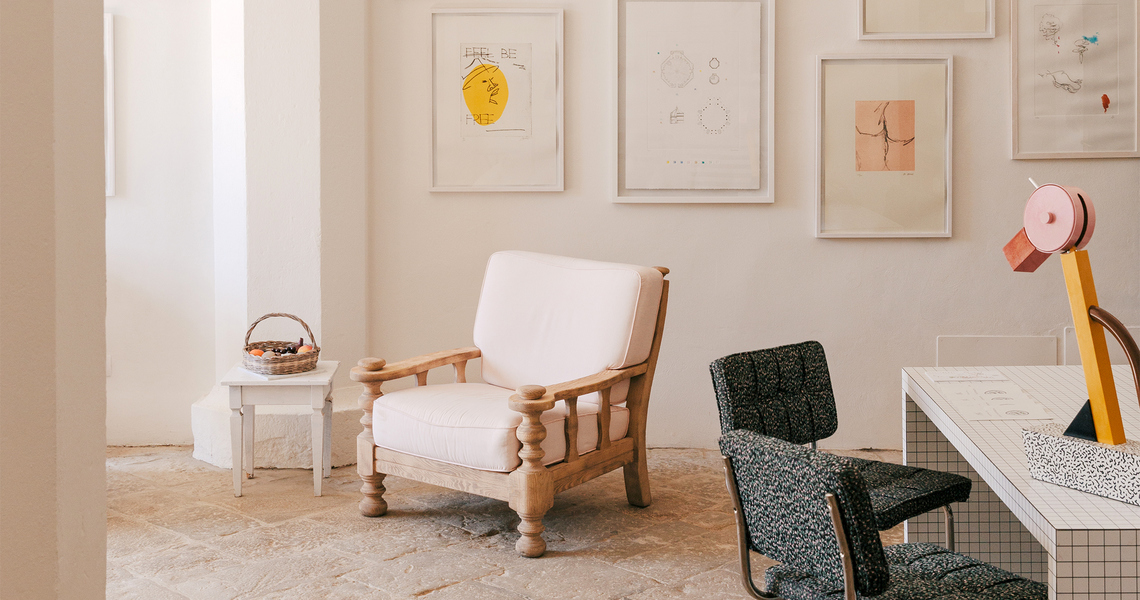 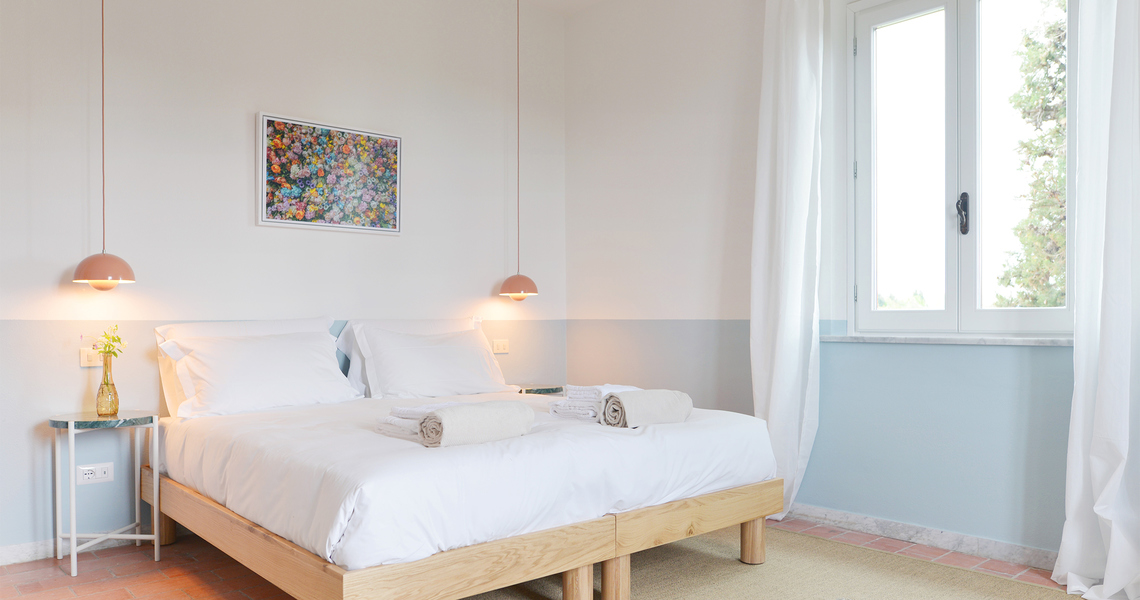 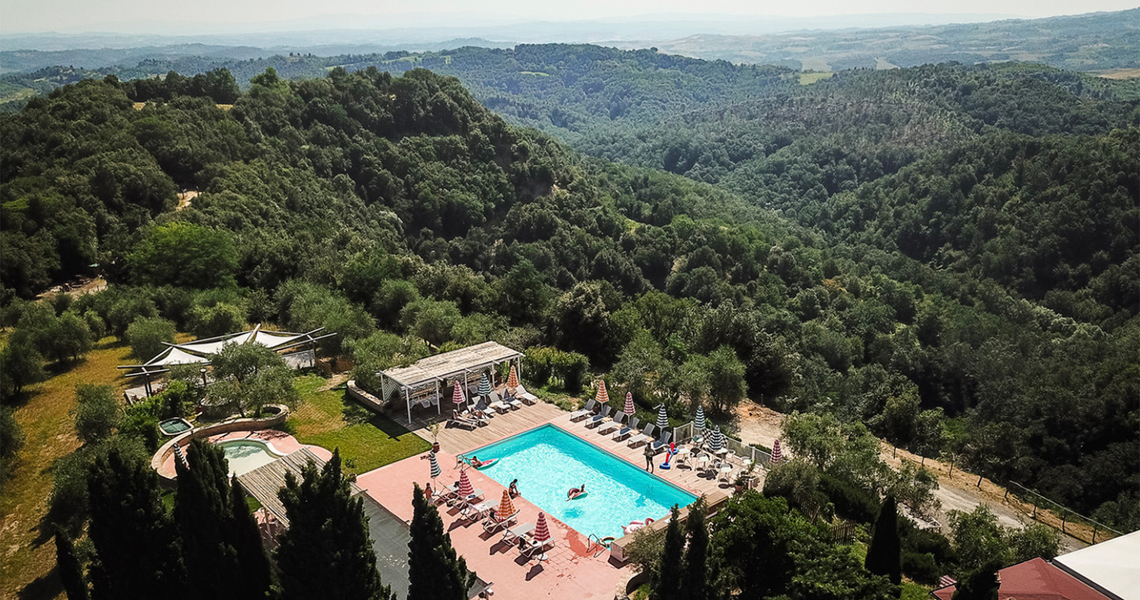 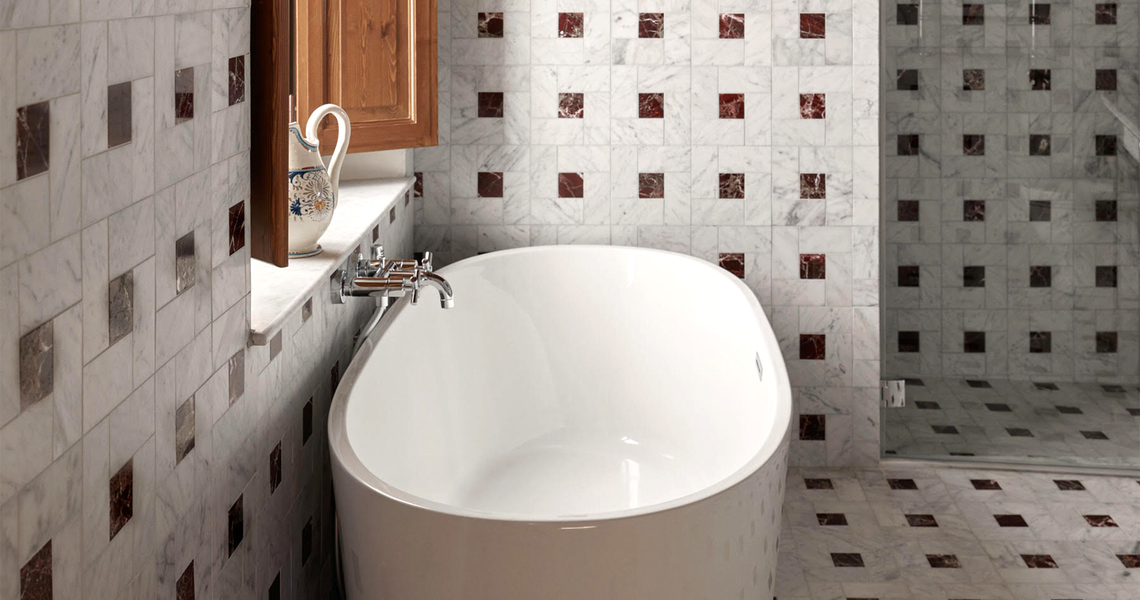 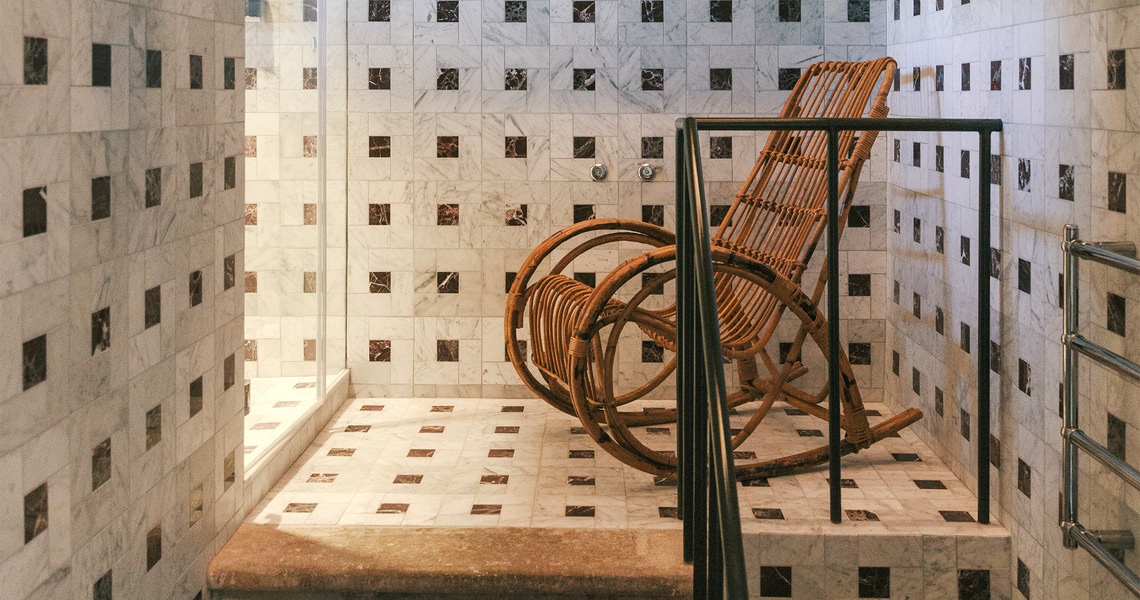 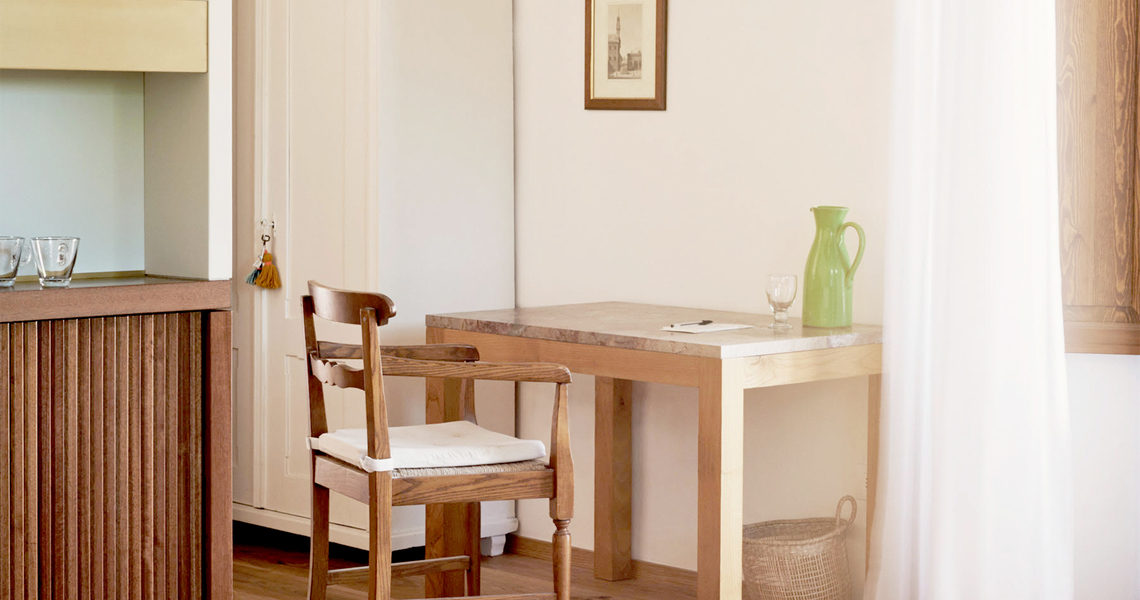 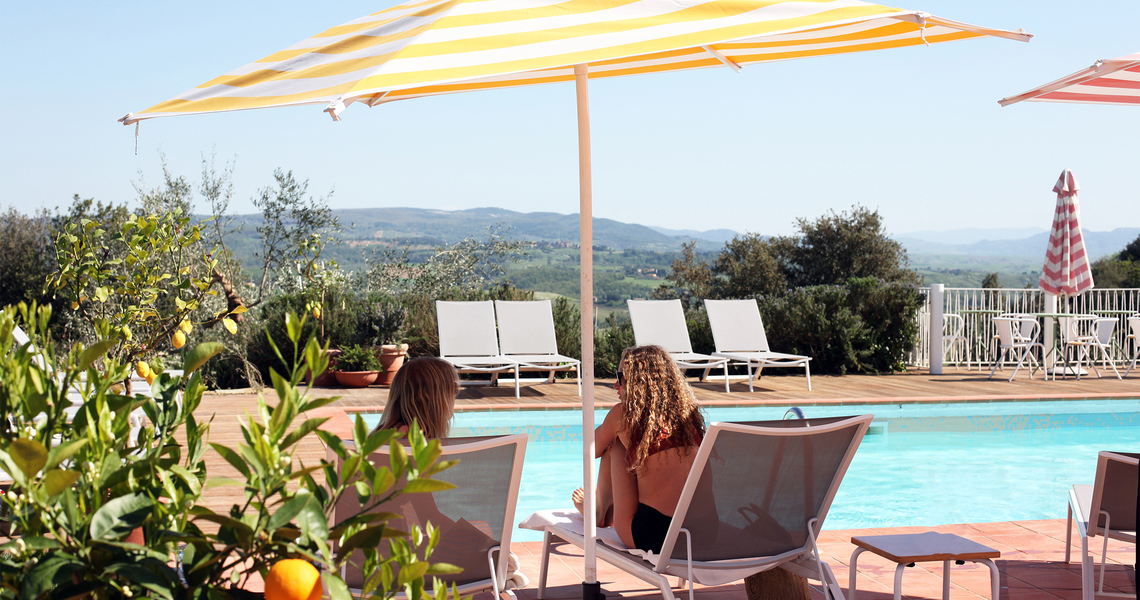 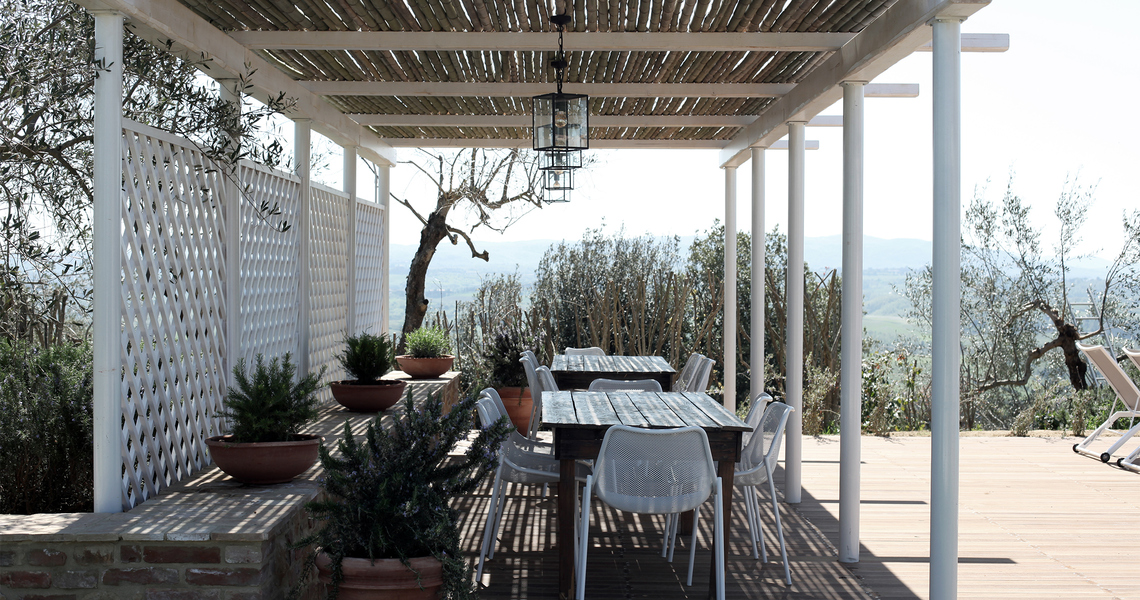 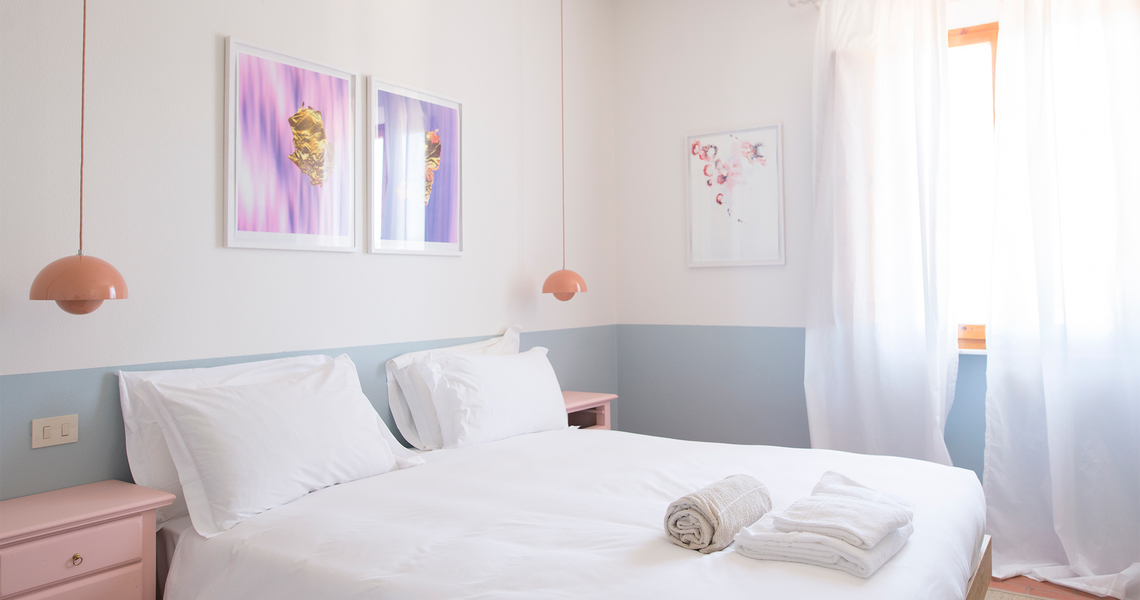 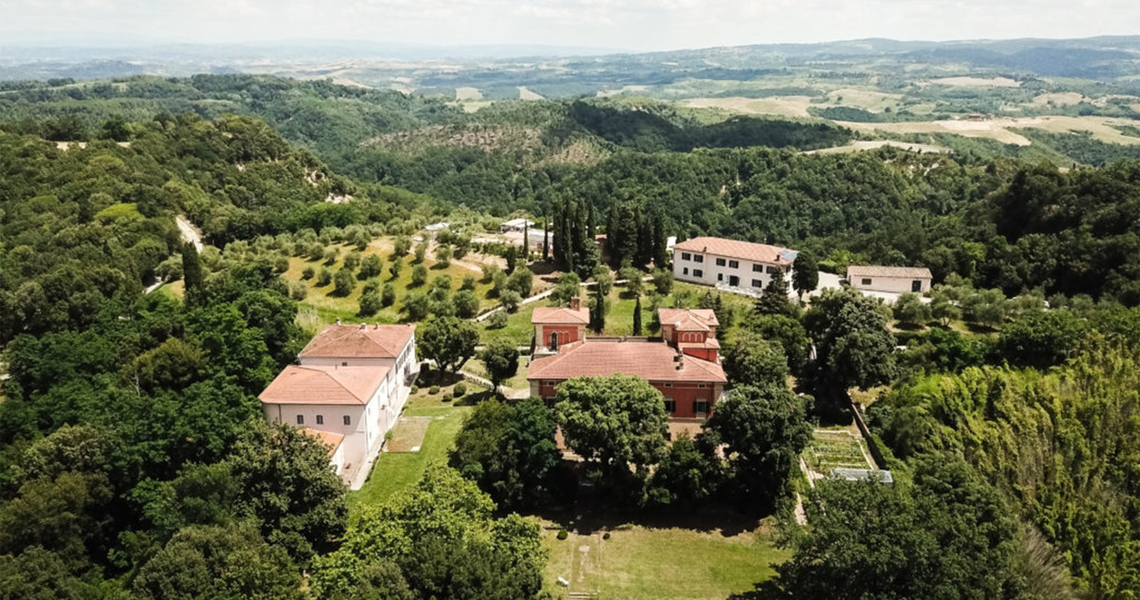 A mansion? You could almost call it a small castle, this red building from the 19th century with its towers and the magnificent column-decorated facade. For a long time it was the beloved summer residence of an aristocratic family and later changed owners until 2007 the current owners found and acquired the now rather run-down gem on a Tuscan hill with an incredible view.

Since then, the three friends Lena Evstafieva, Jerome Hadey and Lionel Bensemoun from Paris have been spending as much time as possible there. Since they come from the art and music industry themselves, they have set up a project through which artists from all fields can stay for a while in the Villa-Lena. Here you have time and rest to be creative. Star chefs from all over the world also come to work in the Villa Lena for one month as Chef in Residence.

Holiday guests of the agriturismo, which opened in 2013, are also exhibition or concert visitors here and have the opportunity to chat with the artists during the aperitivo and dinner. There is a lot of exciting and beautiful things to see here, because every artist leaves a work of art in Villa Lena as a gift, which is then exhibited here. And if you want to rest your eyes from art and artistic creations, you can look outside and enjoy the silvery olive forests, the endless sky and the soft hills of Tuscany.

ArchitectureThe Tuscan villa from the 19th century and the outbuildings that were built over the years, former stables and coach houses, have been renovated by the new owners with the help of local craftsmen and experts and with materials such as wood and Carrara marble. The interior consists largely of reused and restored furniture. In view of the art sense of the operators of the house, it is no wonder that the renovation and furnishing of the property and the outbuildings converted into guest houses has turned out to be extremely tasteful.

FoodAt Agriturismo Villa Lena, organically certified olive oil and wine are made from our own plants. Two large vegetable gardens are cultivated in the harmonious course of the seasons and supply a large part of the ingredients, which are then processed in the kitchen of the agriturismo. Other ingredients all come from the local area from local suppliers.

SocialIn addition to the rooms and apartments for holiday guests, there is also the "Artists in Residence" project under the roofs of Villa Lena. From April to November, artists from all disciplines are given the opportunity to work on their own project for one to two months, and to exchange ideas with other artists present. There are all kinds of different workshops and studios from 20-100 square meters in size in the many outbuildings of the villa. During their stay, the artists organize small painting or pottery courses with the holiday guests present, and there are often exhibitions of finished or growing projects and works. In conclusion - that's the deal - the artists of Villa Lena are giving a work of art that will have a permanent place on the many walls of the many rooms.

EnvironmentAt Villa Lena we try to be a closed circular economy. No new seeds are bought and as little waste as possible is produced. Sun and water are collected and used as much as possible. The 500-hectare land with olive, fruit and vine plants and the large vegetable gardens are watered where necessary with collected rainwater and treated service water. Many of the roofs have solar panels that are used to heat water and generate electricity. And plastic is avoided if possible. Much emphasis was placed on reuse instead of buying new equipment.

Well-BeingThere are changing courses such as yoga, and guided hikes (such as looking for truffles) are also offered. The swimming pool and whirlpool invite you to swim.

The vibe is like a Luca Guadagnino film – think long, hot stifling summers spent lounging by sun-scorched swimming pools – with a helping of Wes Anderson-style symmetry and saturated colours: the pastel orange of the main villa, the pink and green of the bar, and the Hockney-esque palette of the pool, all the richer when cast under the peachy-golden light of dusk.

Villa Lena is less than an hour from Pisa (54 km). From Florence it takes about an hour (70 km), Bologna is about 2 hours away (159 km) and from Rome it takes about 3.5 hours (305 km). The exact address and directions can be found on the Villa Lena website. Arriving by public transport is unfortunately not possible. Pick-up from the train station can be organized on request.