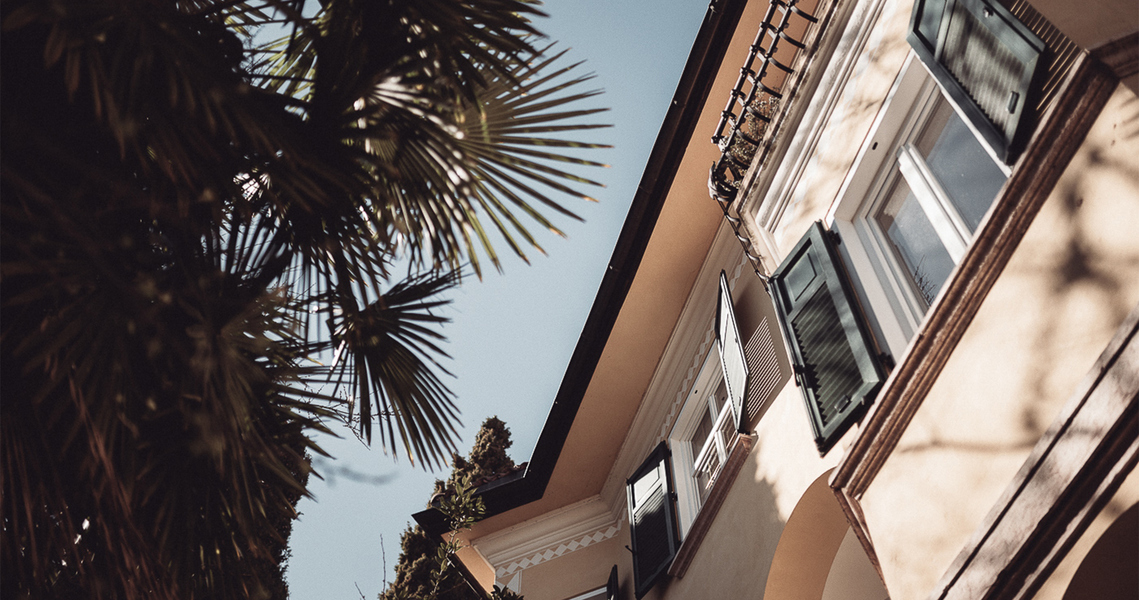 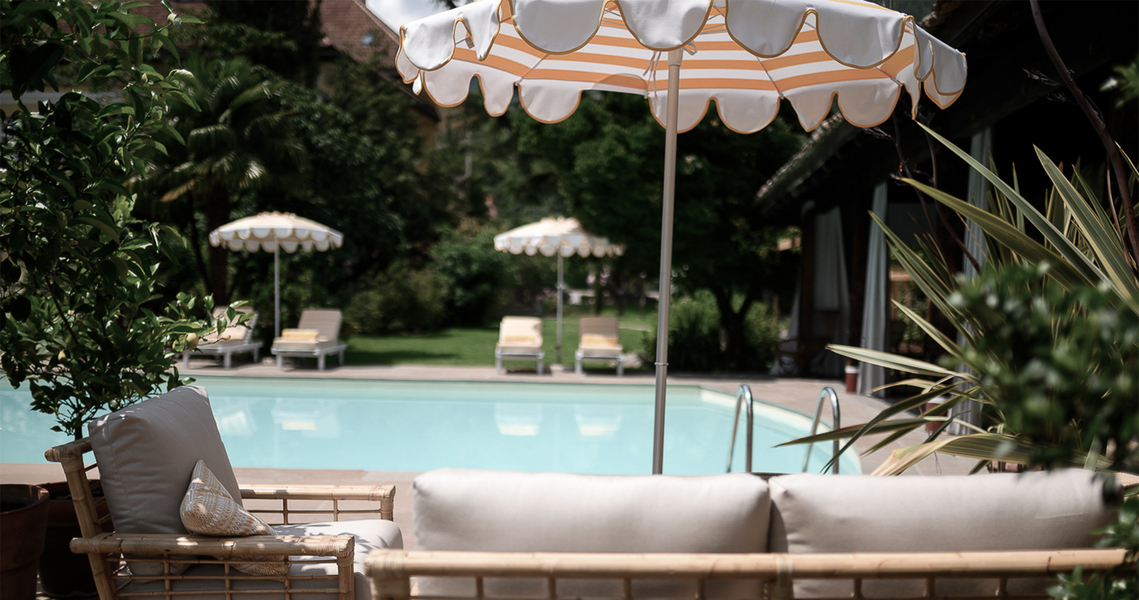 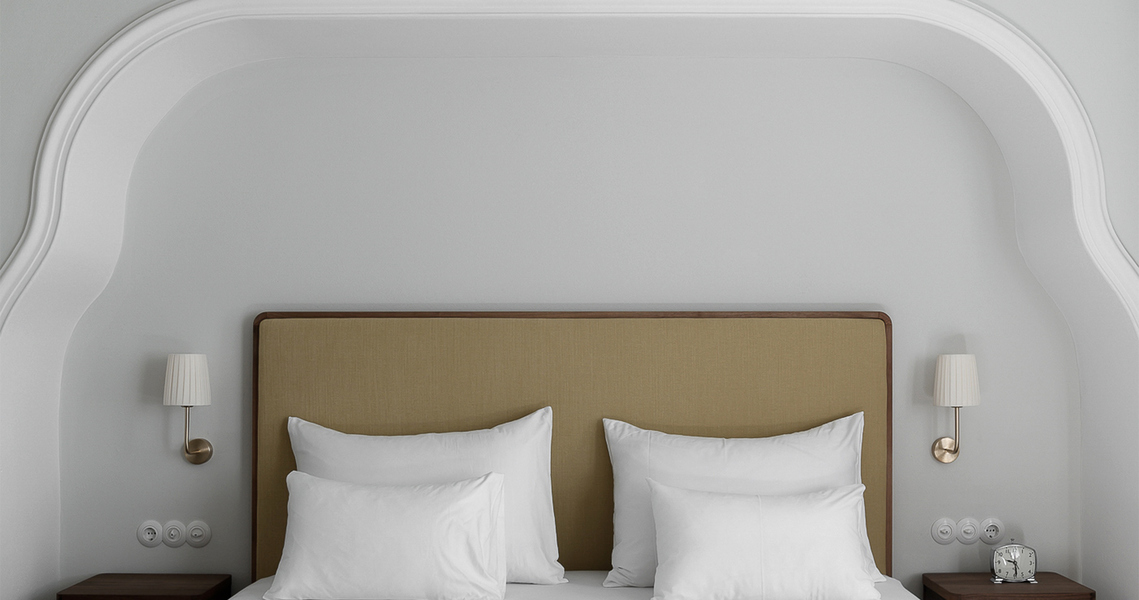 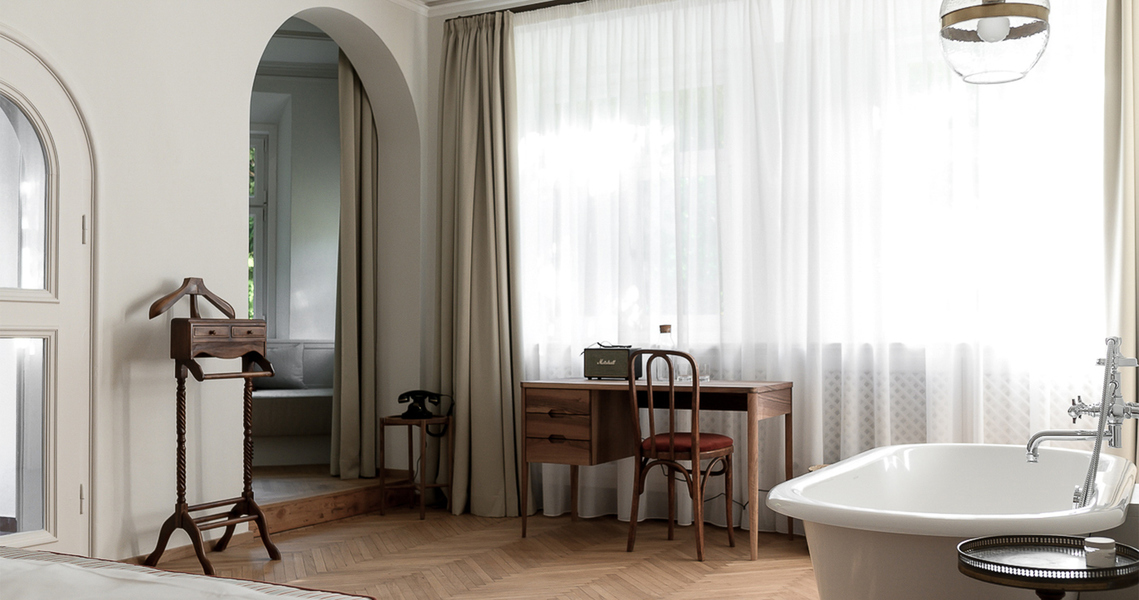 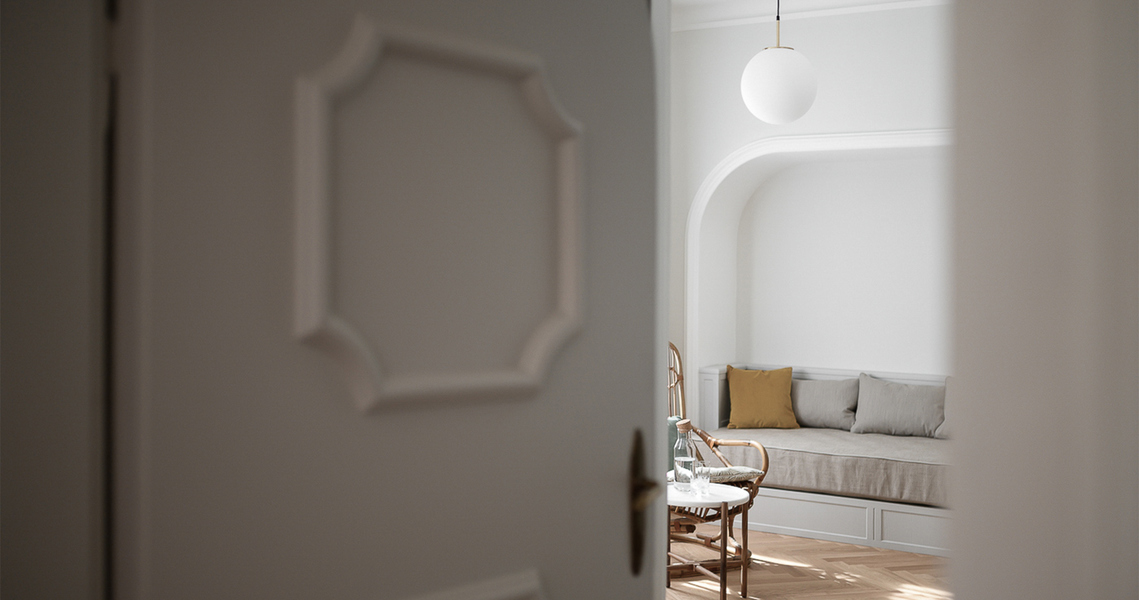 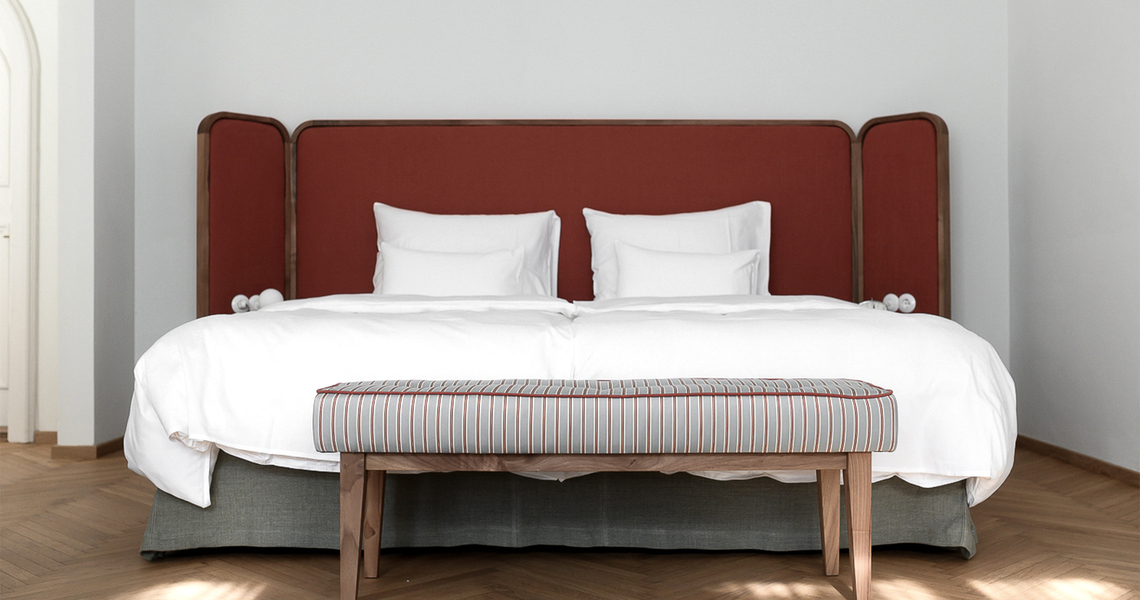 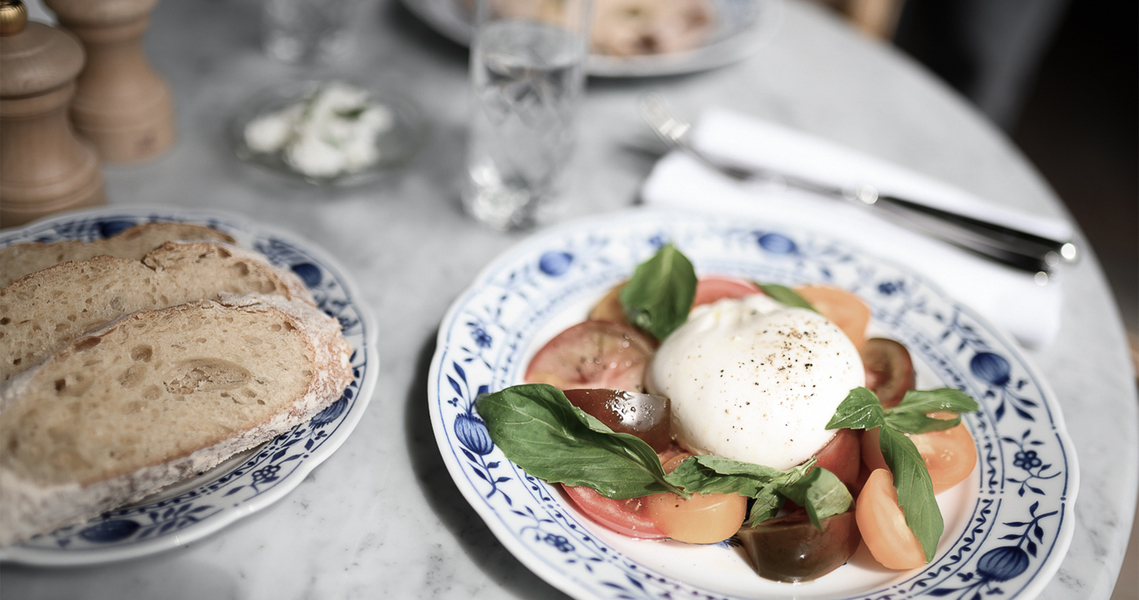 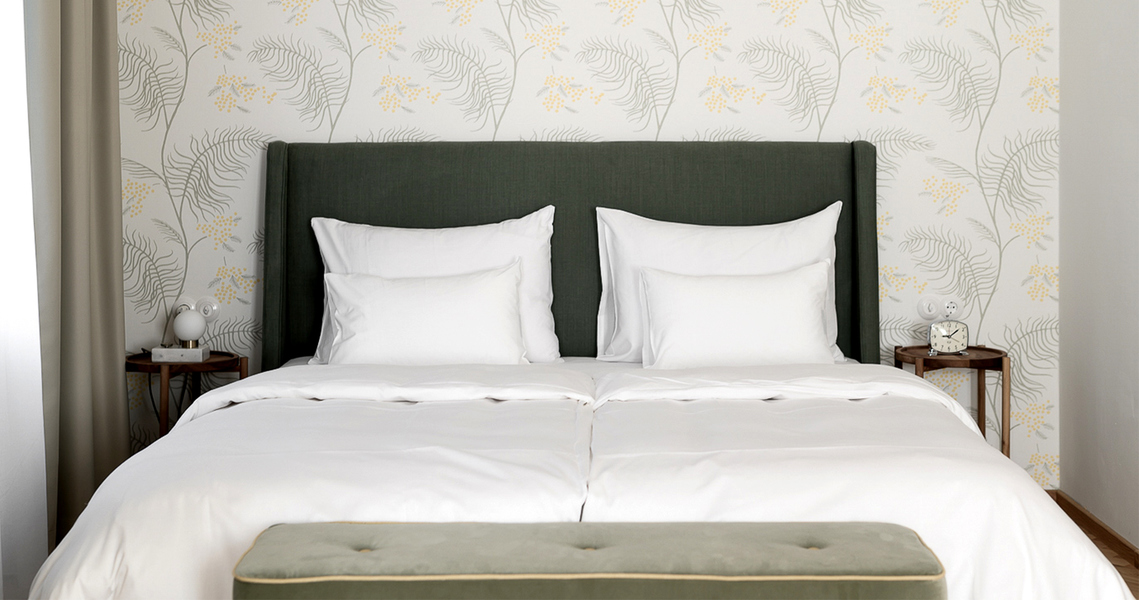 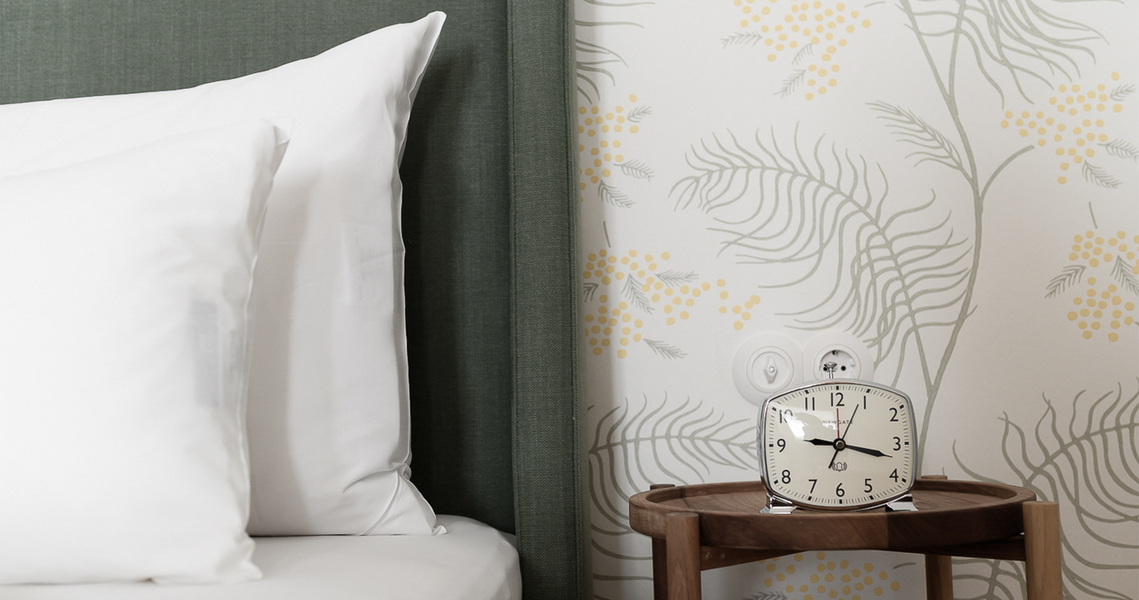 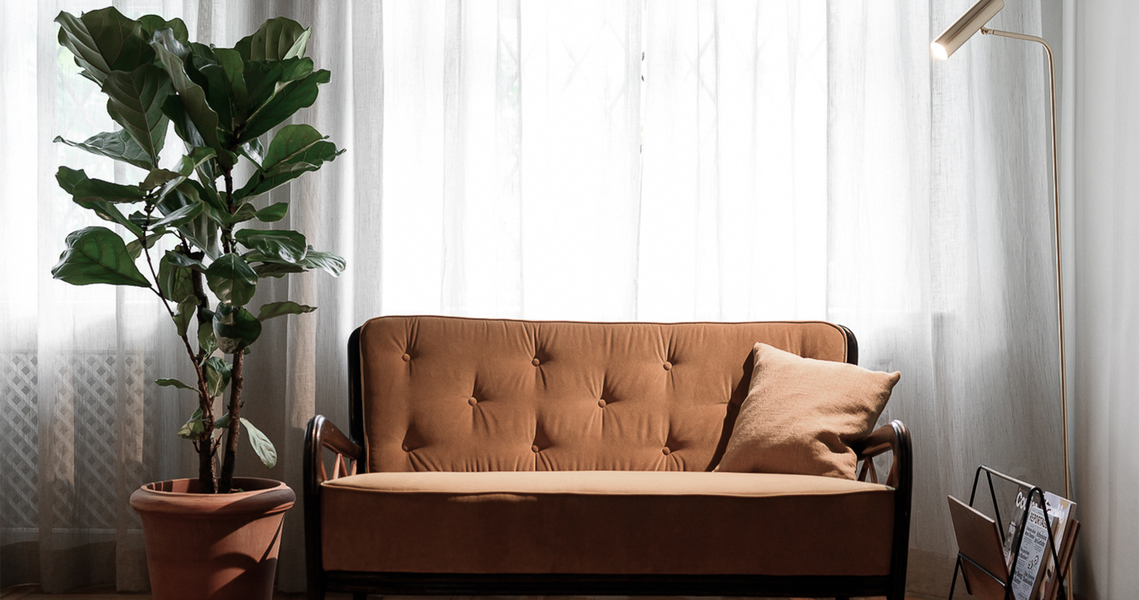 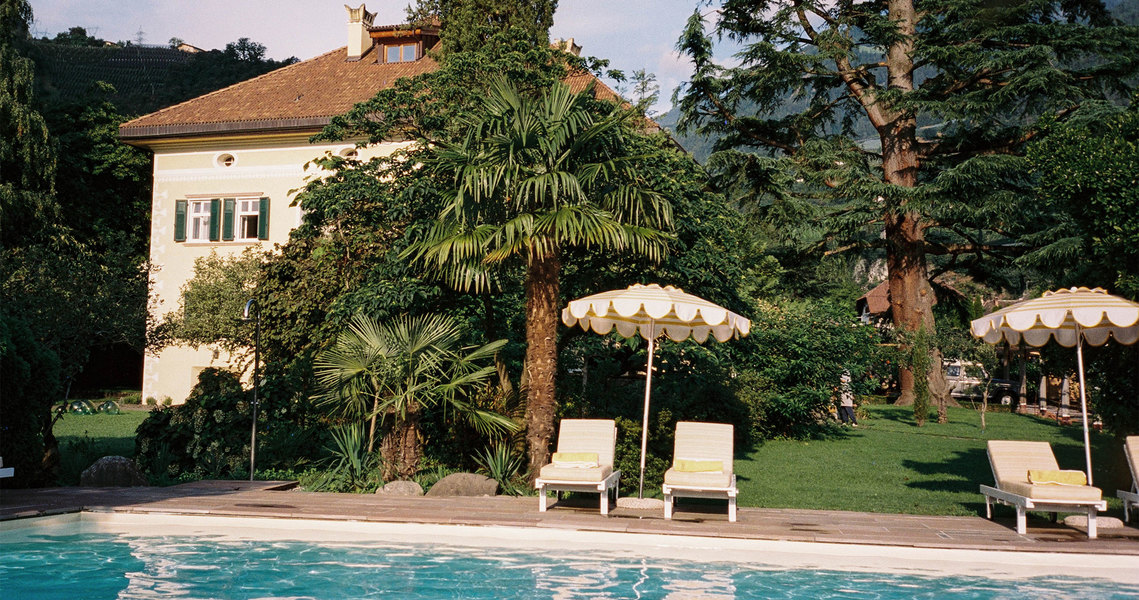 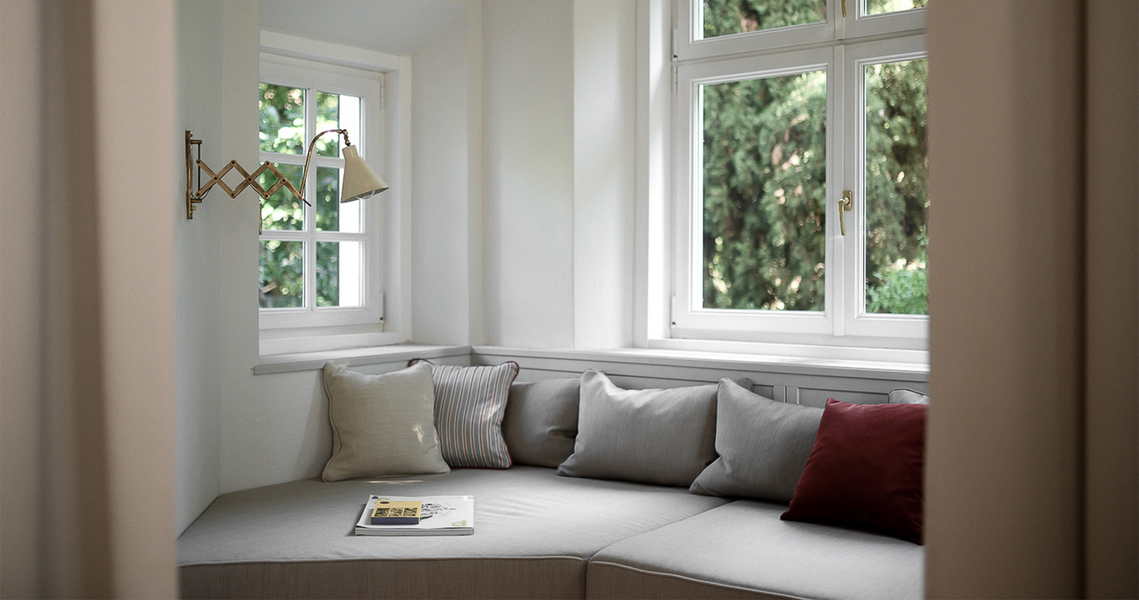 The Villa Arnica from the 1920s is a very special house with an Italian flair. Surrounded by the South Tyrolean mountains, apple trees and vineyards on the slopes of the local mountain Vigiljoch, guests can switch off here.

The pool with a pool house from the late 1960s is located in the middle of a large park and provides physical refreshment on warm days. In addition, the quietly crackling record player in the salotto, a self-served aperitivo from the house bar, and outside the yellow-and-white striped parasols swaying gently in the wind: in Villa Arnica you are not only transported back to a bygone era, here you gain sovereignty over it own thinking, feeling and life back.

All good things come in threes: after the Schwarzschmied and 1477 Reichhalter hotels, the Dissertori family's newest hotel will open in Lana, South Tyrol, in July 2019. As a historic villa and as an adults only private retreat, Villa Arnica is the perfect counterpart to the other two hotels.

With four exclusive rooms and six suites, it invites you to linger for a short or long time, where once artists, actors and creatives from Germany to Italy filled the house with life, inspiration and thoughts. Because until the 1980s the villa served as a guesthouse. It was precisely this spirit that the dissertors wanted to revive: to bring the nostalgia of the Slim Aarons era to South Tyrol and to bring the “dolce vita” of the coast to the mountains. According to host Klaus Dissertori, the villa has always been considered the most beautiful house in Lana.

ArchitectureAs is typical of a historic house, no two rooms are alike in Villa Arnica. Each room, from 20 to 45 m² in size, has been hand-picked - with the fine feel of Studio Biquadra from Merano. The villa is furnished with partially renovated original furniture, which has been combined with ﬂ oral wallpaper and found objects from the antique market as well as hand-picked contemporary design pieces. In addition, guests will ﬁ nd spherical lights with pretty gold details and linen poufs for that certain something. In terms of color, beautiful mustard, sage or terracotta tones were used on walls painted in light gray. The finest Lasa marble meets Zucchetti fittings in the bathrooms. The large corridors with cross arches are flooded with light and create a very special atmosphere. Old parquet floors were sanded down, terrazzo floors restored, vintage sofas reupholstered, chests of drawers and cupboards made to measure. For the work on and in the house almost exclusively local providers were commissioned. Most of them are located in Lana.

FoodWhatever fruit, vegetables, herbs and even flowers are ripe to be picked, moves from the house garden into the saucepan and is processed into syrup, jam, spread or a delicious menu according to the “garden-to-table principle” . In the kitchen, great emphasis is placed on supporting local businesses and local products. At breakfast, guests can choose from the à la carte menu, which greatly reduces food waste. In summer there is a weekly barbecue evening in the pool house - these are particularly popular with guests. The meat for this comes from the butcher in the neighboring village. In general, vegan and vegetarian dishes are offered and intolerances can be reported to the kitchen.

SocialMost of the employees at Villa Arnica come from Lana and the surrounding area. As part of the Hotel Schwarzschmied GmbH, the employees * work in a young and dynamic team with a modern ambience, are dressed by a fashion designer and receive discounts on all beauty and cosmetic treatments, as well as on products by Susanne Kaufmann, which the hotel sells.

Well-BeingGuests can use the wellness, spa and yoga options at the partner hotel Schwarzschmied, which is only 50 meters away. Merano is wonderfully suitable for hikes - from walks to high alpine hikes that can start right in front of the hotel. Bicycle rental is also available.

In the delightful village of Lana, where streams bubble through the streets, this 95-year-old, 10-bedroom mansion has been restored to re-create the feeling of a gracious home. Head to the salon-style bar where guests can hear jazz

Buses run regularly from Bolzano to Lana. The bus stop "Lana, Kreuzkirche" is only 100 meters from the hotel. Pick-up from Lana-Burgstall train station is also possible.