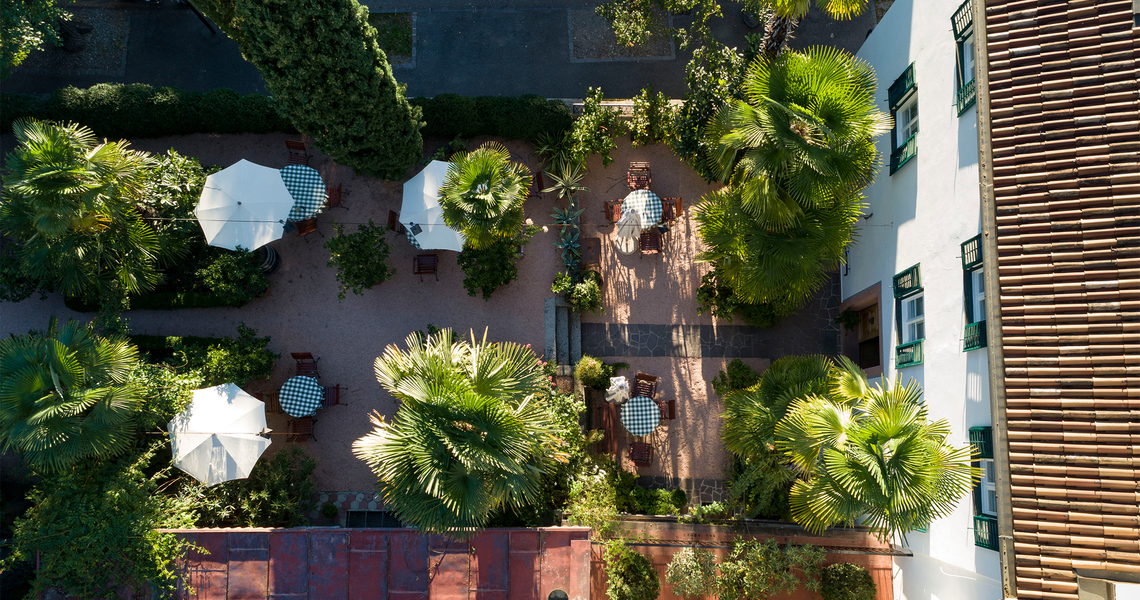 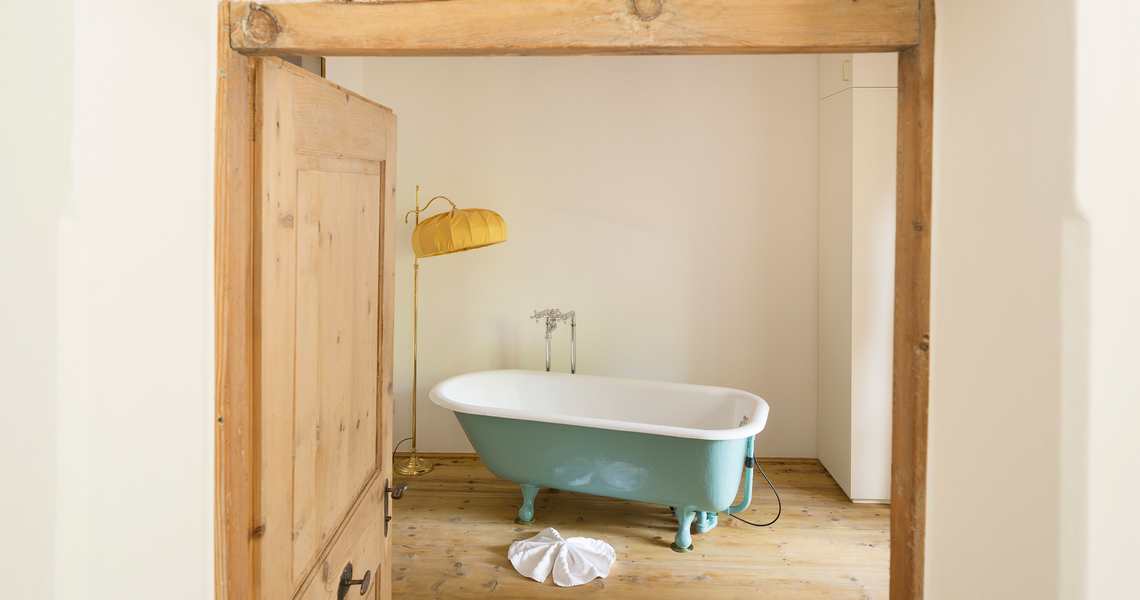 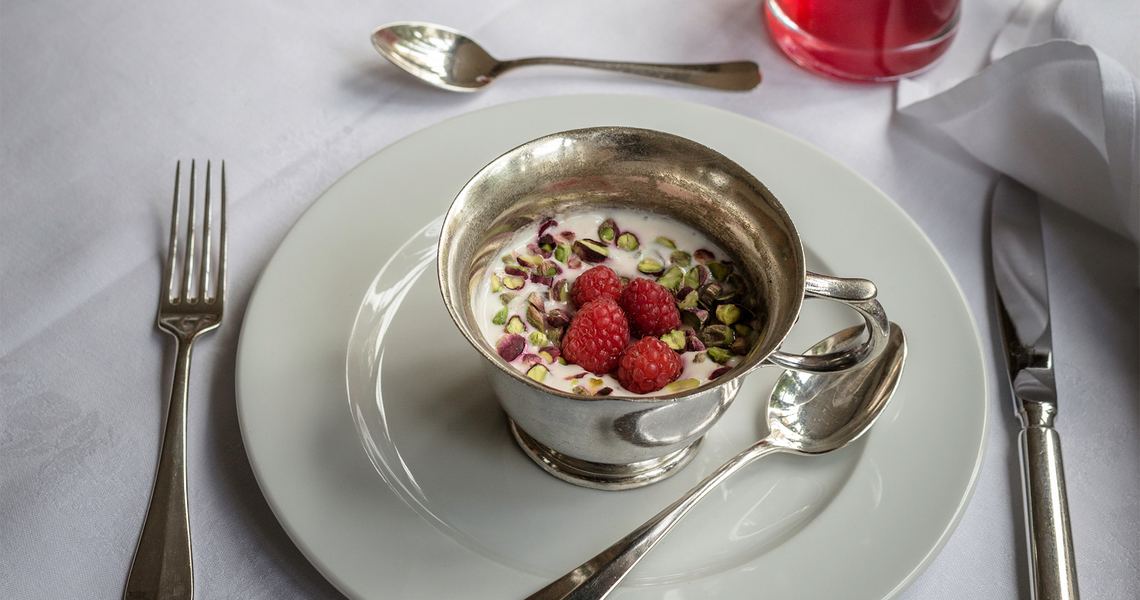 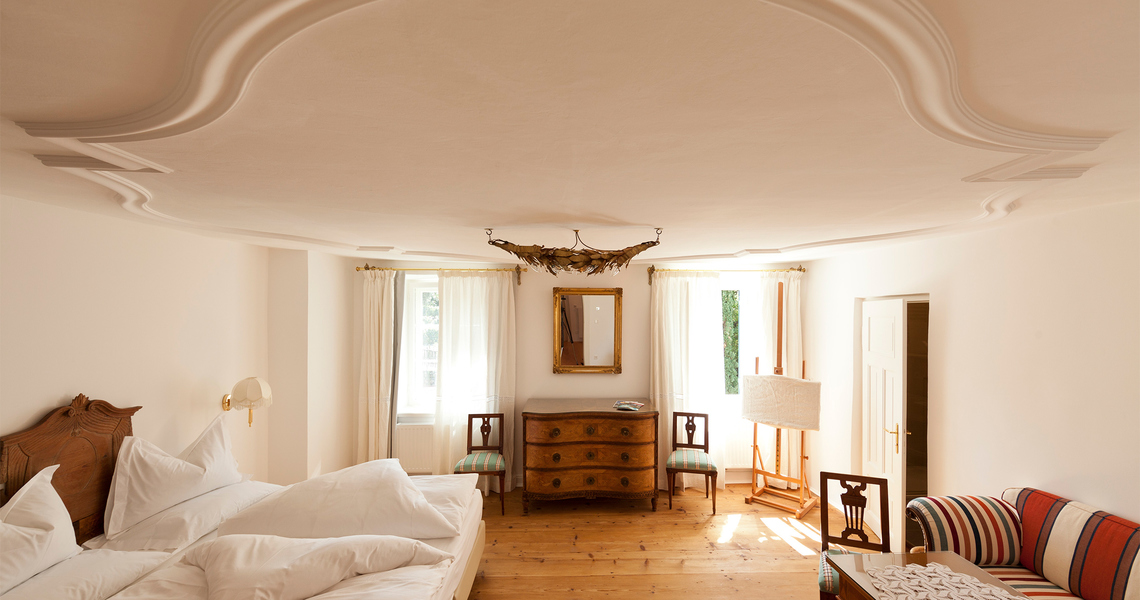 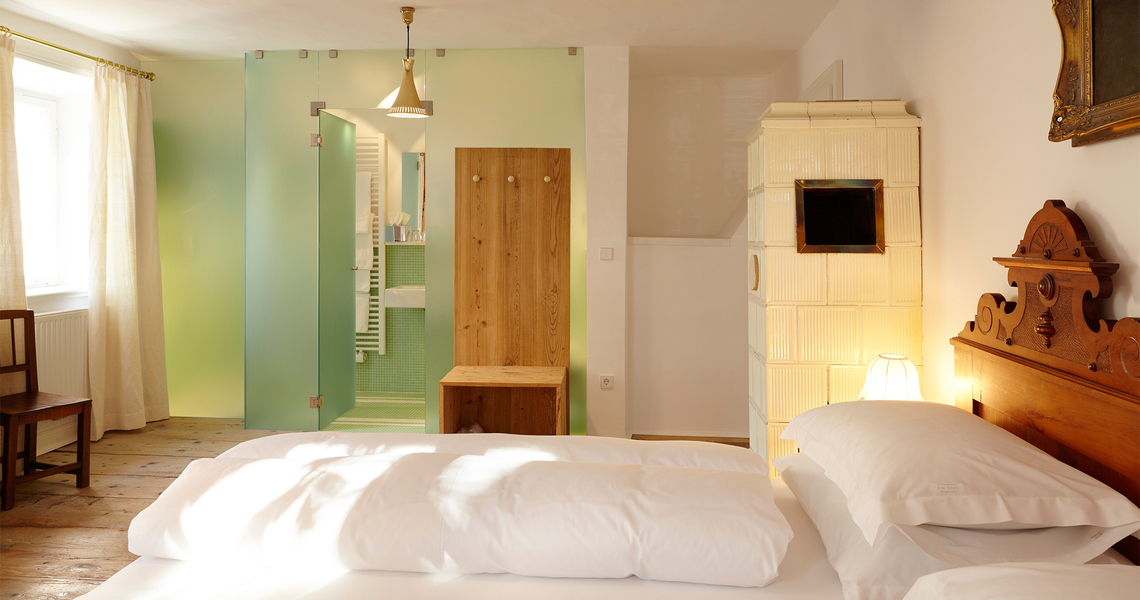 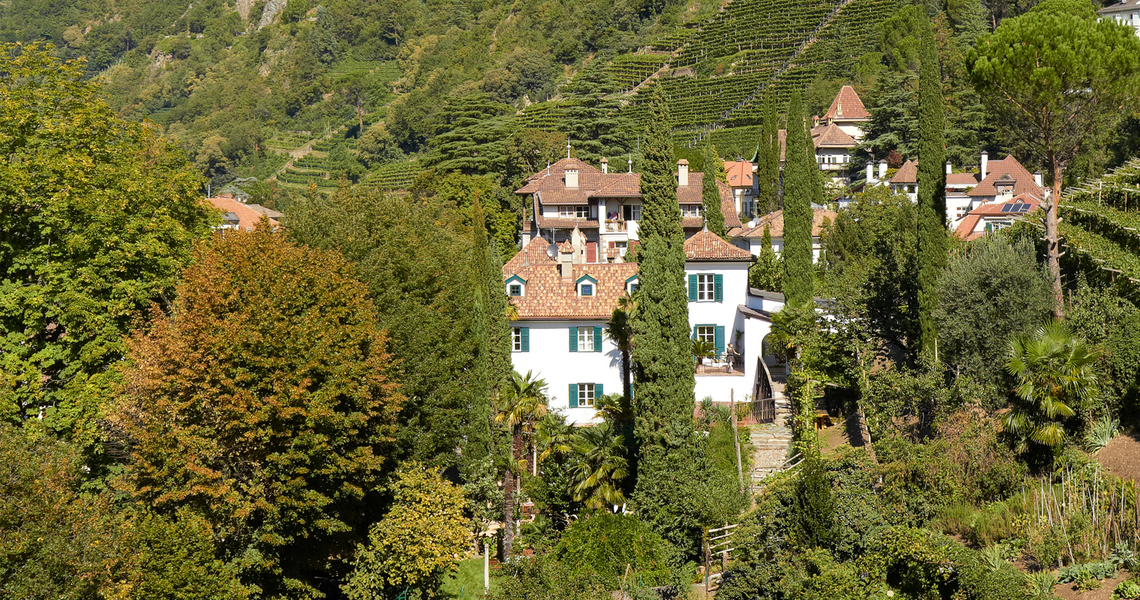 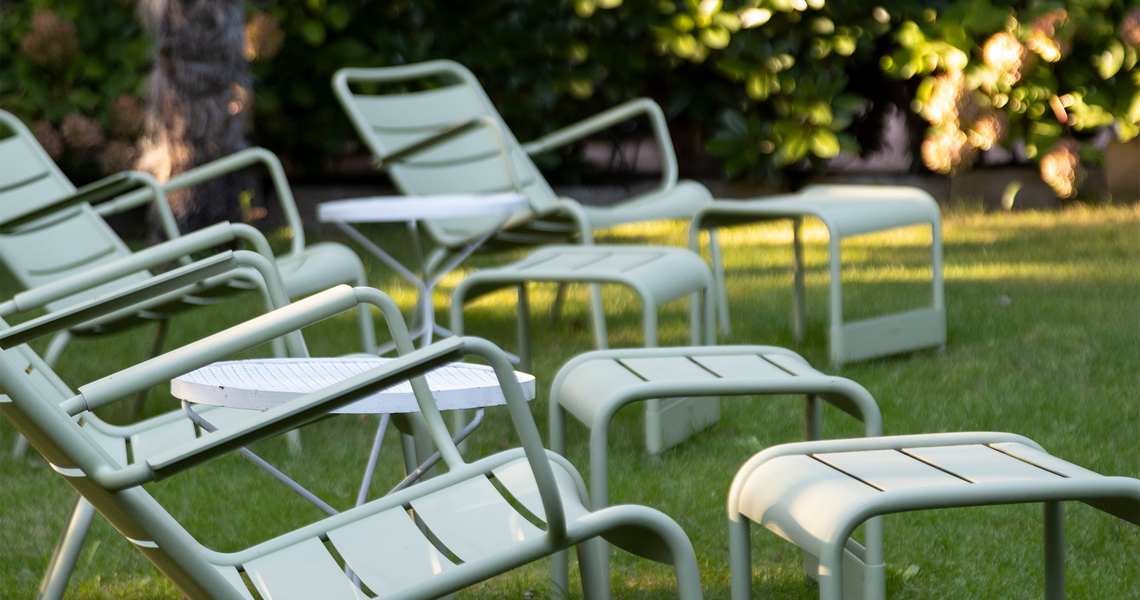 The Ottmanngut is a very special accommodation in the heart of Merano. As soon as the guests enter the manor house, they can immerse themselves in a harmonious calm, come to themselves and relax.

A day in the Ottmanngut starts wonderfully with the view of nature: Most of the windows look out onto your own Mediterranean garden, from palm leaves to cypress tops to citrus trees and many other plants. In addition, depending on the room location, guests can also look at the mountain landscape of the Texel Group or the hotel's own vineyard. Depending on the weather, guests can spend the day in the garden. There you can also get to know the two tortoises, Max and Helmuth, who have been living there for many decades.

Although the Ottmanngut is in a very quiet location, the town center is within walking distance and therefore invites you to stroll or linger. Of course, the South Tyrolean mountains with their nature parks and mountain lakes also invite you to various excursions.

The Ottmanngut was first mentioned in documents in 1290 and has been owned by the Kirchlechner family since 1850. It is currently in the 6th generation by Martin Kirchlechner. The manor house was one of the first houses in Merano. It started as an agricultural commodity, and at some point livestock farming and a wine bar were added. Since then it has served as a noble residence, family home, guest house and during the First World War even as a military hospital. Guests have probably stayed in the house since the middle of the 19th century, and it has also been used as an inn for a long time. After short periods of closure during the world wars, it was leased until 1973 and then continued by the grandparents Kirchlechner until 2010 as a guest house with a kitchen.

After a renovation, the Ottmanngut was reopened in a new look in 2012. The aim of the renovation was to authentically redesign the manor house in order to create a place where guests can be themselves and feel completely at home.

You can find the hosts' favourite recipe to try in the kitchen whispers.

ArchitectureThe basic structure of the more than 700 year old house with its thick stone walls and wide plank floors still exists today. The terrazzo floors, the box doors and the windows with the old glasses date from the turn of the last century, and can still be found today. The craft companies that were used in the renovation come from the area. The materials used also: local larch on the floors and local stones such as Andrian porphyry or Bozner porphyry. The eleven rooms are designed very differently, whereby everything also relates to the history of the house. Most of the rooms are adorned with old plank floors that were freed from old carpets during the renovation, carefully restored and laid with hand-forged nails. The furniture and lamps in the house come mainly from the family. Most of them are Biedermeier, Josephinian, Art Deco and Art Nouveau antiques. The curtains were sewn from old linen fabrics and some had old lace. There are also elements from the 1950s that function as contemporary witnesses and have been supplemented with modern elements. When designing the rooms, the rooms themselves have often already given the style or the colors using existing elements, such as a built-in wardrobe or the color of an existing tiled stove. In all steps, attempts were made to include Merano's home decor. The atmosphere is different in all rooms, ranging from small and cozy to rustic and large, or also stately and elegant. What all rooms have in common is a kind of solidity paired with minimalism. The rooms are not overloaded, they consist of a lot of white in combination with antique furniture.

FoodThe morning hunger is catered for with a daily changing three-course breakfast. It is mostly vegetarian, but of course special requests, such as serving meat / sausages, are also catered for. The entire nutritional concept follows the principles of slow food: good, clean and fair. If possible, the Ottmanngut only serves dishes that are organic and regional, and contain almost exclusively seasonal foods. Various small farmers help as partners. But also from our own cultivation comes various fruits (such as grapes, apricots, cherries, a few old apple varieties, pear pears, strawberries, raspberries) and various vegetables (tomatoes, cucumbers, zucchini, etc.) and a lot of herbs. For this purpose, purely organic sourdough bread is baked, jams are specially made. Various homemade juices and wine from our own vineyard complete the offer. Of course there is a large selection of vegan and vegetarian dishes in the Ottmanngut.

SocialDealing with employees is very important to the Kirchlechner family, which is why you try to support them in all situations and, for example, hire apprentices, interns or refugees. They are also involved in donations to various social projects.

EnvironmentSustainability has played an important role in the Ottmanngut from the beginning. From the beginning, the intention was to maintain the house sustainably for the owners and their coming generations. Sustainability then runs through almost all areas of the house: from renovation and furnishing to cleaning, laundry and the served dishes. All rubbish is recycled, and there is also a separate compost heap. As sustainability is very important to Kirchlechners, all guests who arrive by train or bike receive a 5% discount.

Well-BeingThe Ottmangut is all about the "well-being" of the guests. There is no spa or anything like that, but the spacious, Mediterranean, grown garden. You sit under palm trees and cypresses and the scent of citrus blossoms keeps coming up in your nose. There are various places with deck chairs, which you can also retire to privately. These are both in the garden below and in the vineyard. Thanks to the unobtrusive service, guests are offered such nice, relaxing hours in nature, with a good book and a good glass of wine or a scoop of homemade ice cream. To further promote this calm, there are now TVs in the rooms only on request, but there is an extensive library with selected hand-picked books and a large selection of international daily newspapers, magazines and magazines.

The Ottmanngut can be reached from Innsbruck in just under 2 hours (156 km). It's about 3.5 hours (312 km) from Munich and about 4.5 hours (273 km) from Zurich. The exact address and directions can be found on the hotel website.

Kitchen whispers
11. July 2020
The Ottmanngut prepares sourdough focaccia for us