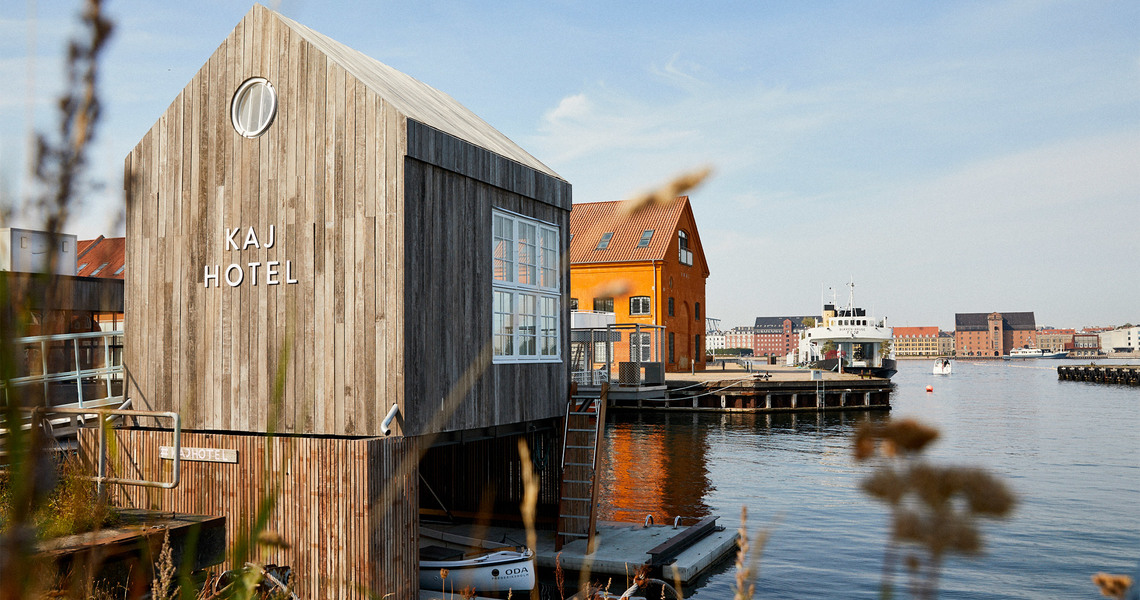 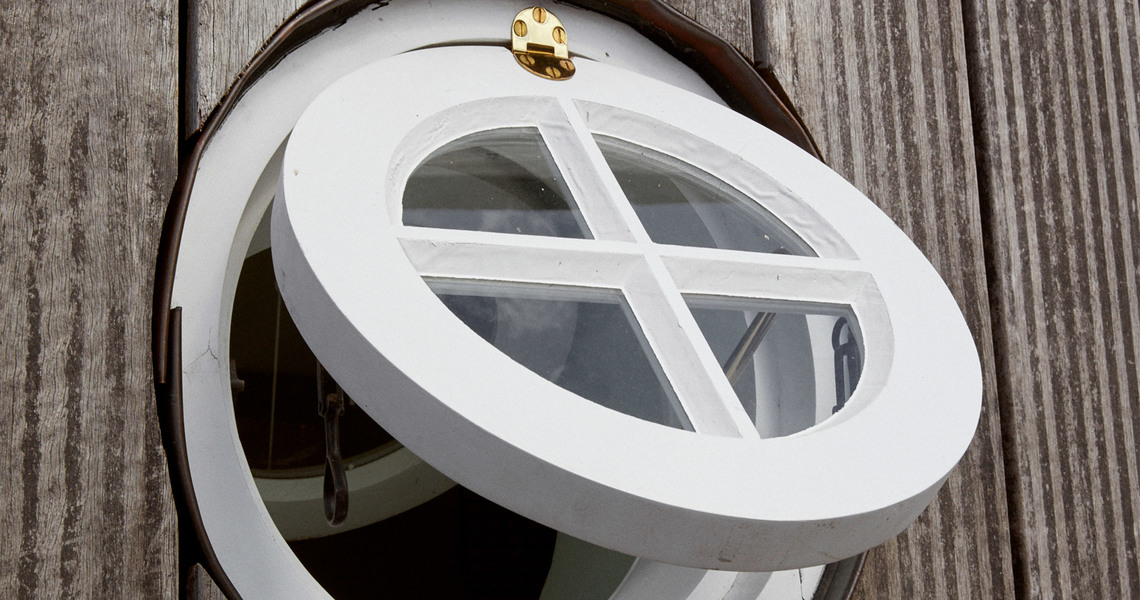 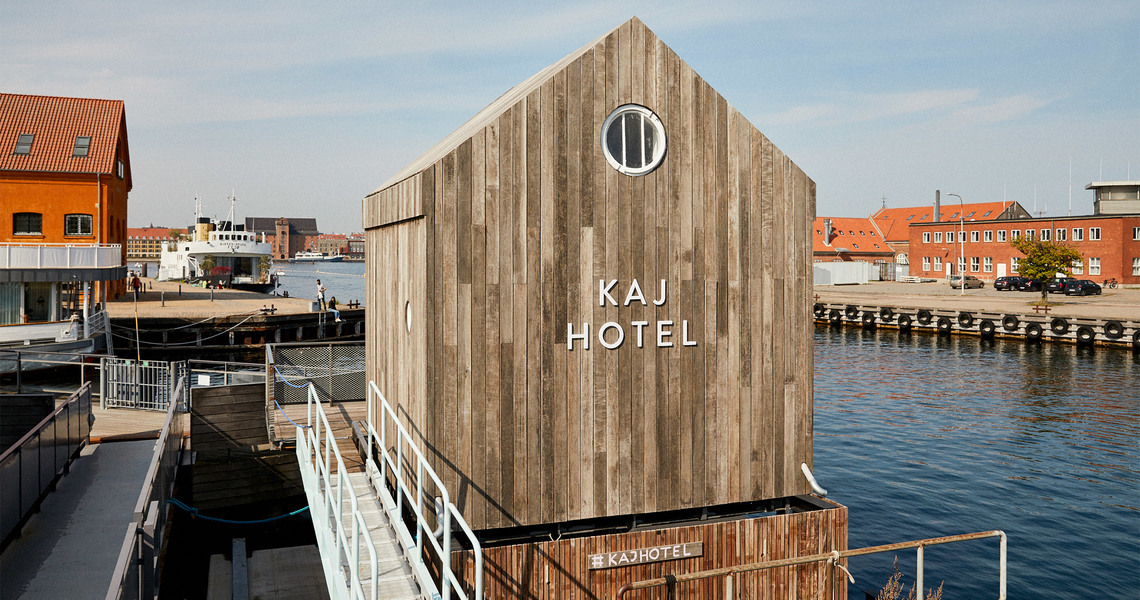 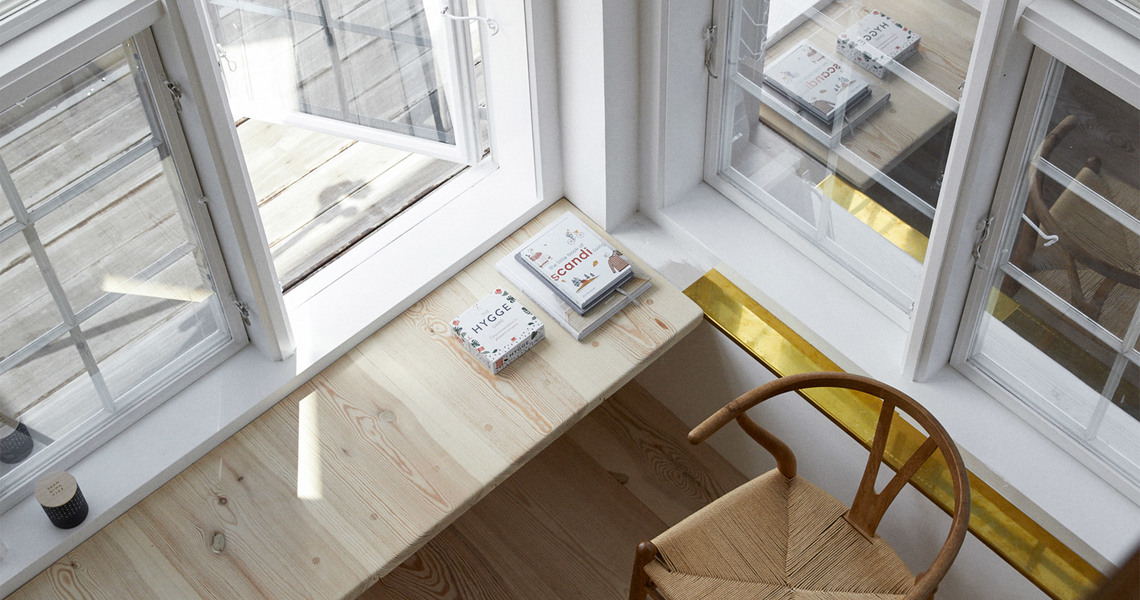 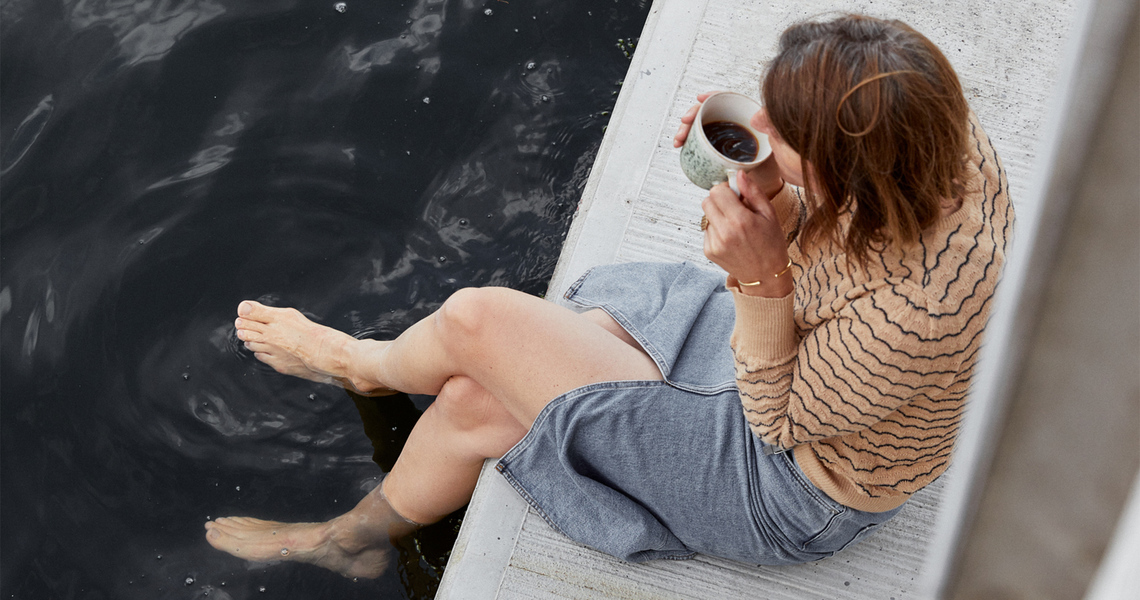 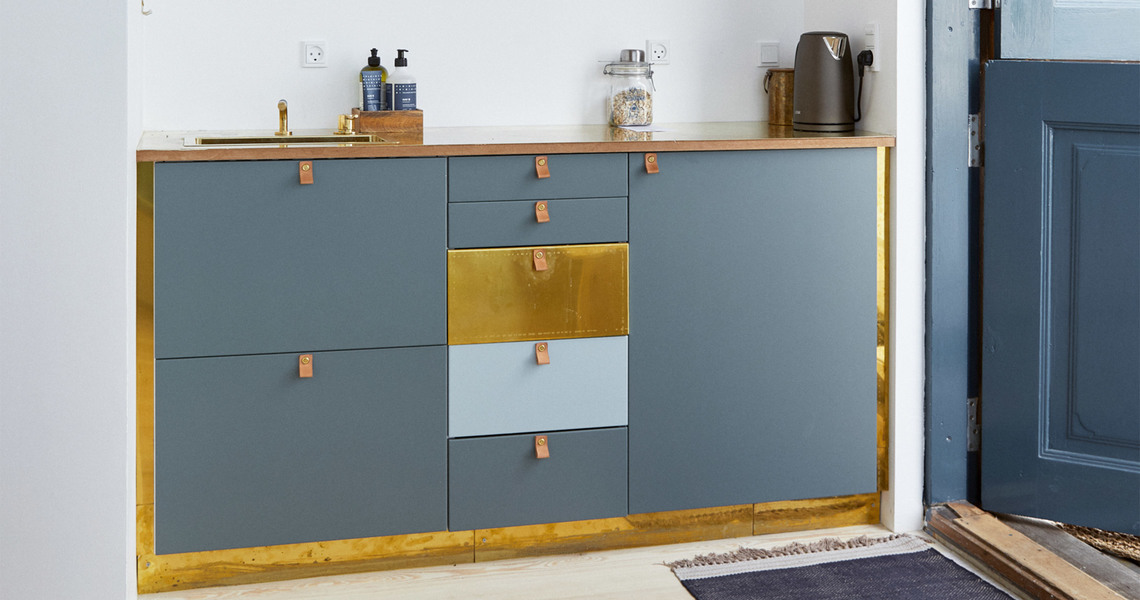 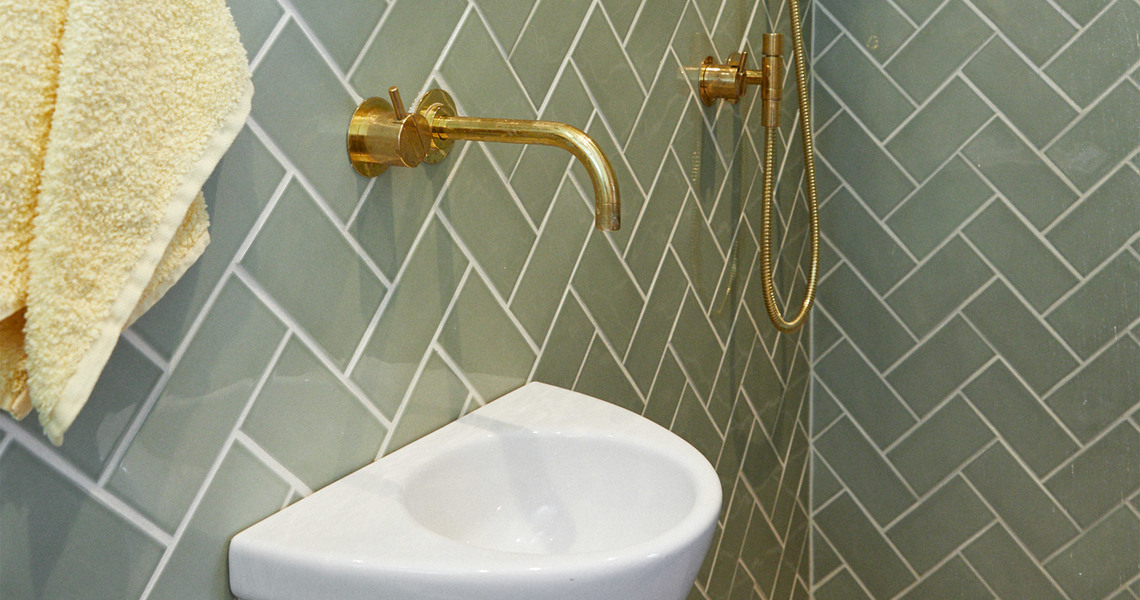 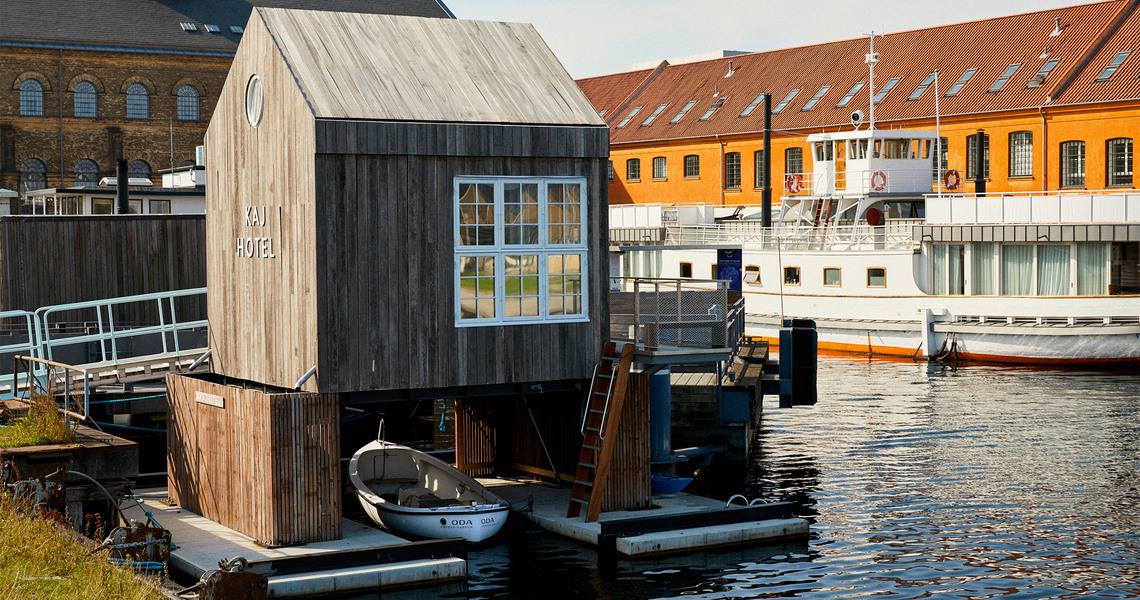 The Kaj Hotel is a modern houseboat and is located in the port of Copenhagen. It consists of a high room with a mezzanine and has its own jetty. The view through the large windows of the skyline of Copenhagen and the harbor is unique. If you don't just want to watch the passing ships, you can go out to sea yourself - on a stand-up paddle or with a kayak.

The host couple, Barbara and Toke von Haffner, live on a houseboat themselves and wanted to make this experience accessible to others. So they researched for four years and gathered a lot of inspiration until their dream finally came true and, with the help of the architect Karl Smith-Meyer, could be built. They mainly used recycled materials such as Douglas fir floorboards or made new furniture from them, such as the bed, which was handmade.

In addition to the wood, which is typically used in Scandinavia, some highlights made of brass were also used. The mixture of old and recycled with new furniture and the modern kitchenette ensures a special feeling of well-being, in keeping with Danish hygge. The Kaj Hotel opened in September 2020. The hosts chose the name of the boathouse not only because it is a typical male name in Denmark, but also because “Kaj” (in German quay) also stands for a bank fortified by walls.

ArchitectureThe architecture can be described as a combination of recycled materials and an extremely classic construction. The house looks simple at first glance, but it consists of many small details, such as the jetty below. The foundation consists of old railway masts, the wood of the facade comes from a wooden terrace of a house in the neighboring community. The windows are from the former &quot;Kuglegården&quot;, a two-hundred-year-old building of the former Danish Defense Command, just one block away. The small round window and doors were purchased from a local recycled building materials store called Genbyg. The materials for the stairs and the passage come from an old ship.

FoodGuests are offered a 100% organic and homemade porridge mixture, consisting of fruit, juice and milk - so guests can prepare their own porridge for breakfast in the morning. There is also the delicious coffee from the regional roastery Impact Roasters (www.impactroasters.dk), which in turn supports social projects. There is also a small minibar for a fee, which is stocked with selected drinks. A small herb garden is being planned at the back of the house. There are numerous recommended restaurants in the area, such as NOMA, which has two Michelin stars.

Well-BeingThose who dare to jump into cold water in the wind undergo “cold water therapy”, as the hosts call them and warmly recommend, in order to get their circulation going in the morning. But also consciously observing the sky and the harbor from the large panorama window ensures relaxation. Two bicycles, a kayak and stand-up paddling are available to guests free of charge. There is a great running track from which you can see the skyline of Copenhagen 300 meters away. Not far from the houseboat is Copenhill (https: // www.copenhill.dk/en), an epicenter for mountain sports such as skiing, climbing and hiking. The hosts are also planning to build a sauna.

The Kaj Hotel is 15 minutes by taxi. from the airport

Bus route 2A goes directly from Copenhagen Central Station to the "Fabriksmestervej" bus stop, where the Kaj Hotel is located. Line 2A also takes you directly to the "Am Christianshavns torv" metro