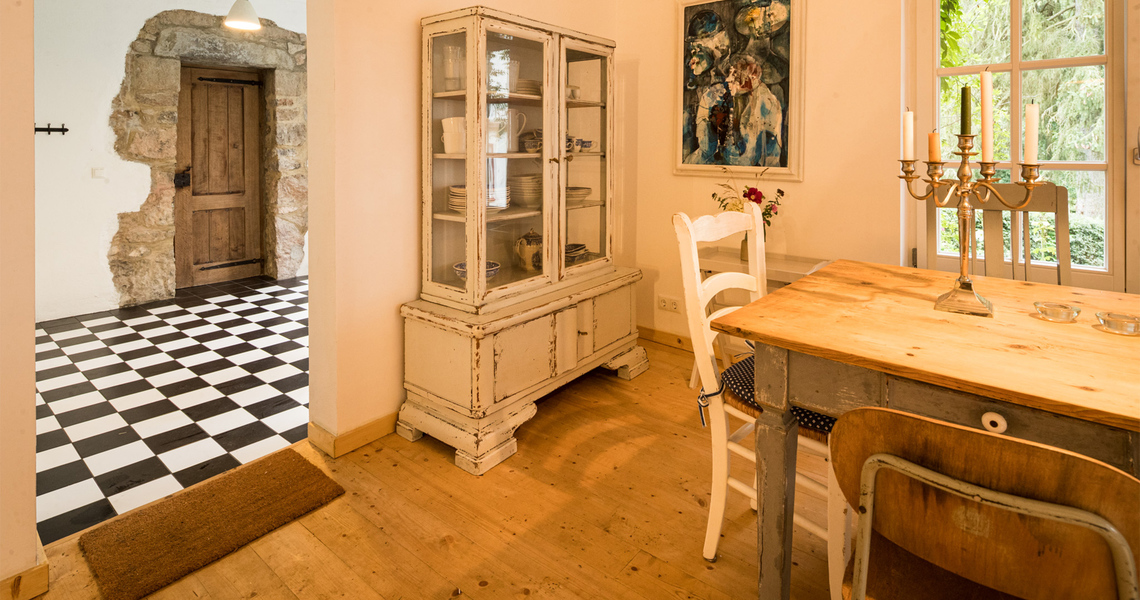 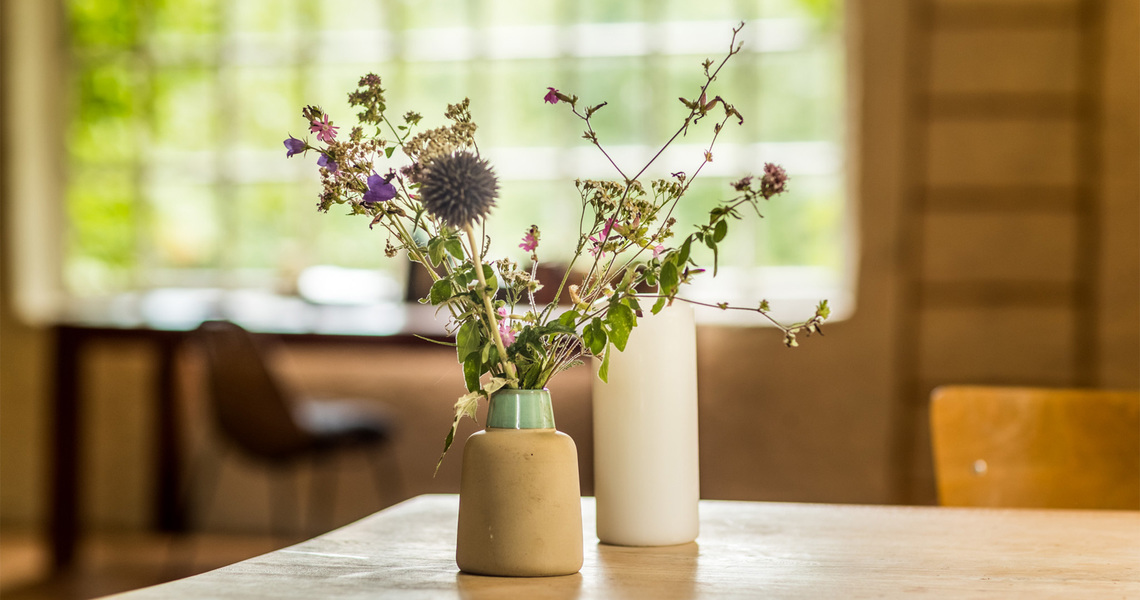 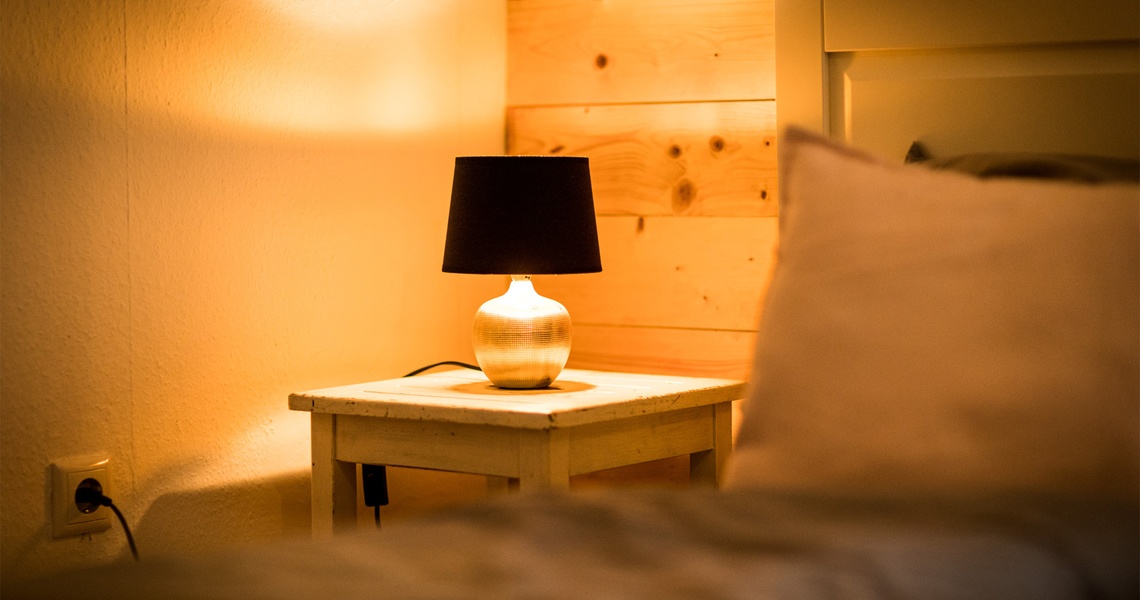 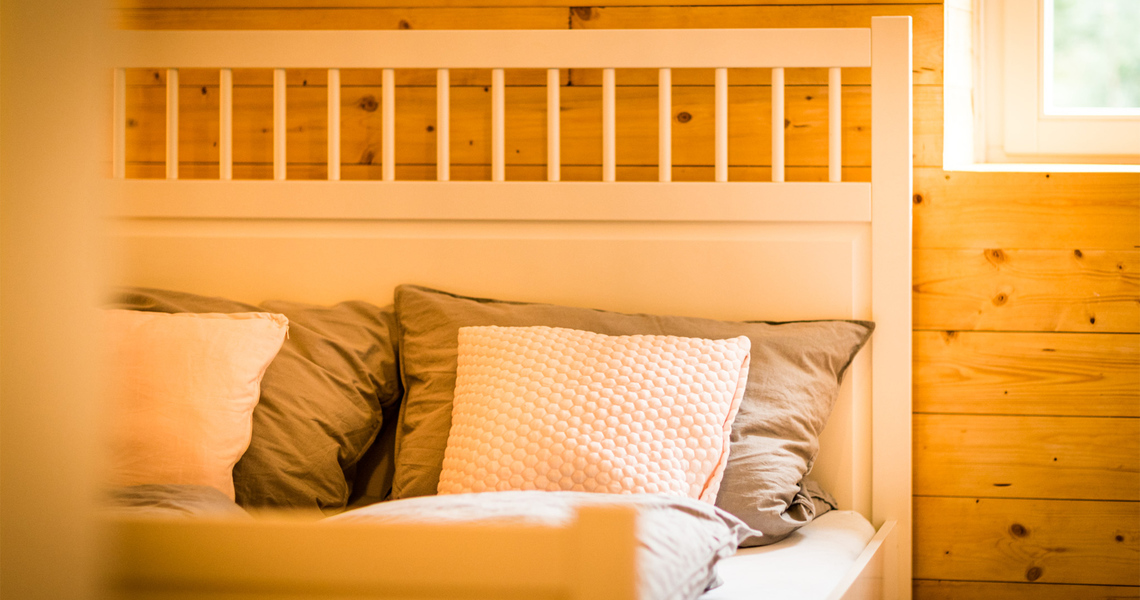 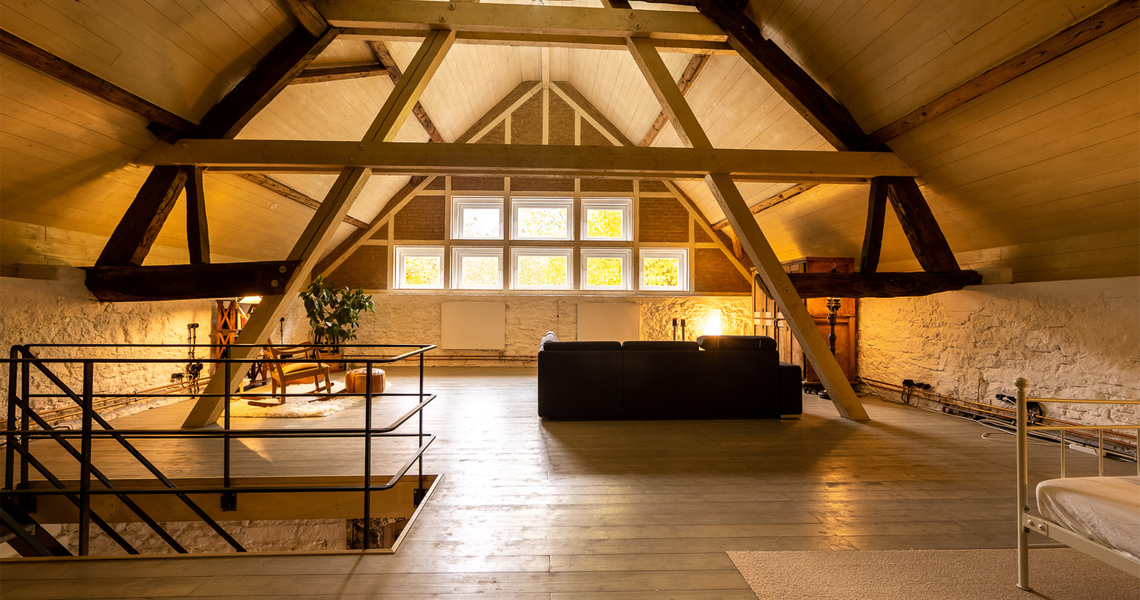 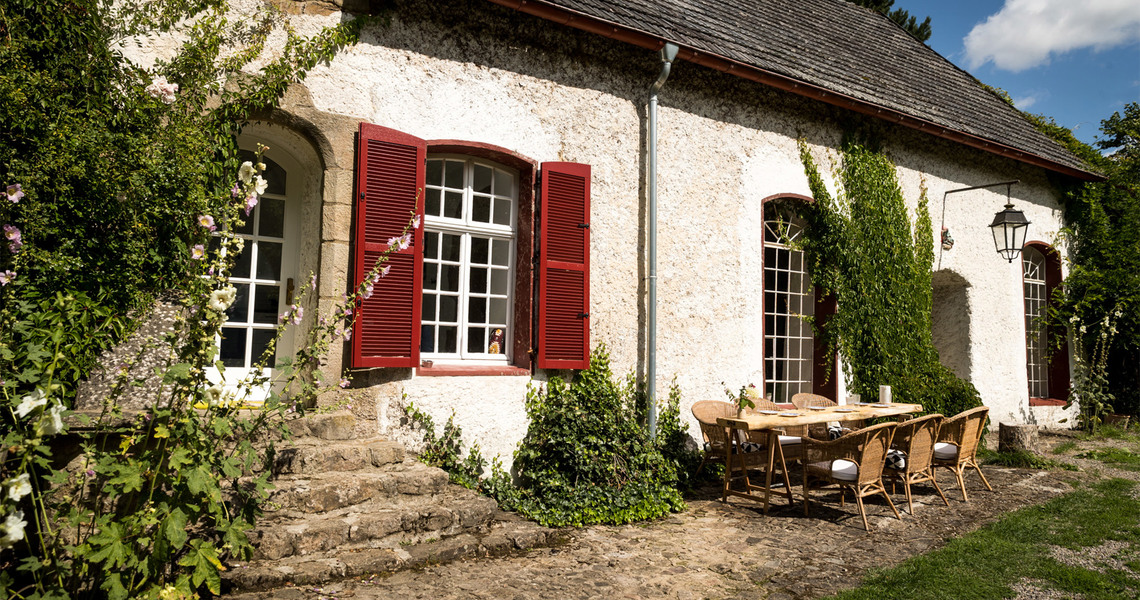 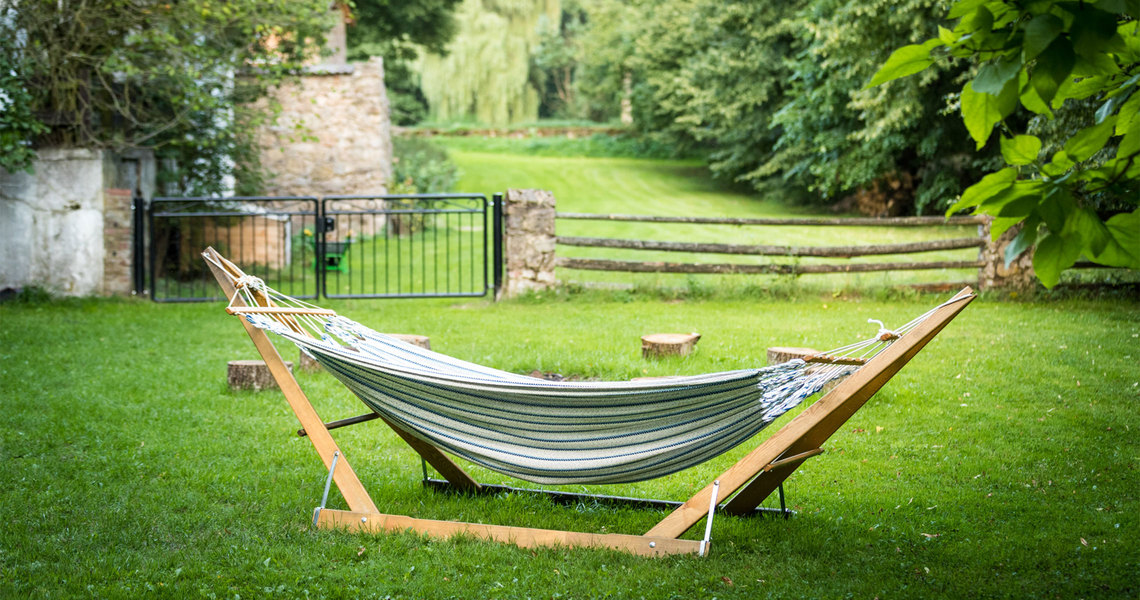 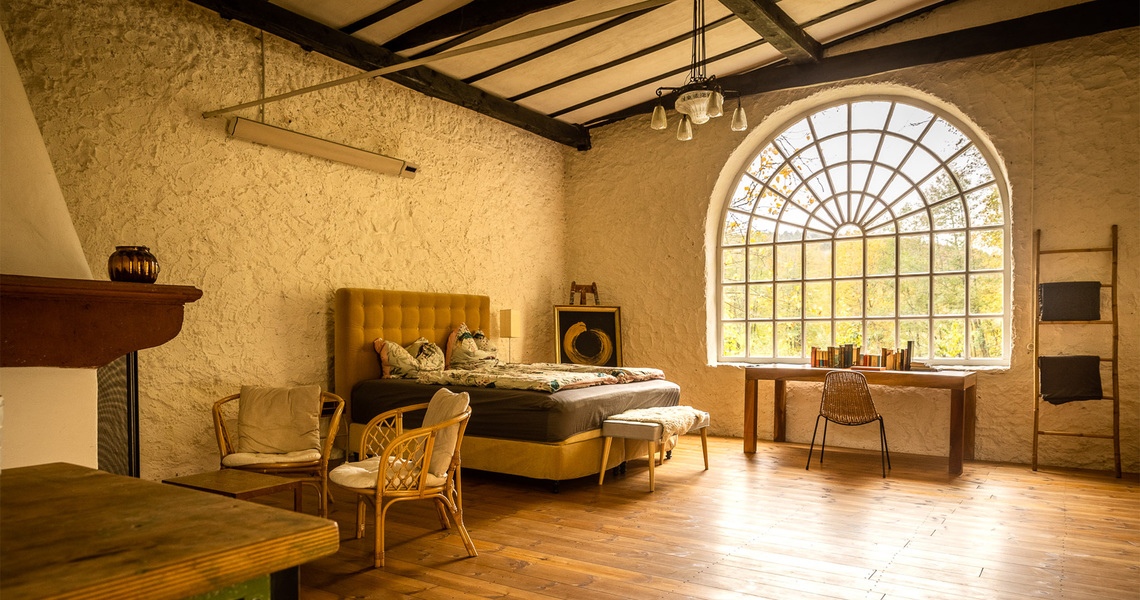 If you look out of the window at Gut Neuwerk in the Eifel, you will see one thing above all: lush green. The accommodation is located in the middle of the Rosenthal nature reserve, surrounded by forest and hay meadows, in complete tranquility - the nearest neighbor is one kilometer away. Sara and Michael Niederig live with their three children and their grandparents in this wild and romantic idyll and run three lovely holiday homes there.

They wanted their children to live in harmony with nature, and in spring 2019 they swapped city life in Cologne for the country air in the Eifel. And have not regretted the step since. “We have bees, butterflies, newts, kingfishers, cormorants ... and we discover new things every day. We live in a real biotope! To be able to show all this to the children is great! ”, Sara works as a sports journalist and is currently doing further training as a naturopath, her husband Michael works in sports management. On the estate, they also work on the “self-sufficiency” project. “The vision is that at some point we will go to work because we can and not because we have to,” says Michael. The holiday home rental plays a central role in this. Little by little, they renovated the property and now three houses from the historical building complex are being rented out. The furnishing of the holiday apartments is individually designed. A mixture of old and new, a bit of vintage, a bit of industrial style, in the end everything comes together to form a pleasantly puristic unit.

The first finds, which indicate the cultivation of the 6ha large area, are over 2000 years old and go back to Roman times. The ancient Roman aqueduct, which brought the water from the Eifel 116km to Cologne, leads across the site and even forms the back wall of the living room in the former caretaker's house. Real history you can touch! The first records are from the 18th century. As a supplement to the existing old works, the iron forge "Neuwerk" was built, which is the namesake of the property to this day. The current floor plan of the estate was created around 1778, but has been changed again and again due to renovations.

If you like, you can take a look backstage on our blog.

ArchitectureDuring the renovation, attention was paid to the use of sustainable, natural materials and also to preserving the old building. In the caretaker's house, for example, the old glass wool was removed and then insulated with the sustainable alternative hemp. Two villagers regularly help with the renovation, the Eifel is patent, Sara and Michael have already found out. A company from the area was also commissioned for the new combined heating system made from logs and pellets, because personal contact with regional providers is important to the hosts. The interior is largely made up of second-hand furniture, a lot from friends and family.

FoodSara cultivates an approx. 2000 square meter fruit and vegetable garden according to the principles of permaculture. Everything works in a closed cycle and makes use of the good ideas of nature. Another mainstay on the way to self-sufficiency. Harvest surpluses, especially in summer and autumn, are generously shared with the guests. The latest experiment includes 82 truffle trees that were planted in two large meadows at the entrance to the estate. The eggs of the hens living in the garden are also available to guests for delicious breakfast egg variations. Otherwise, the guests take care of themselves in the kitchens of the holiday apartments at Gut Neuwerk.

SocialIn the off-season, the host family offers alternative vacation concepts: with “Vacation against hand”, for example, guests can lend a hand and stay overnight free of charge.

EnvironmentSustainability and a connection to nature are lived at Gut Neuwerk. Energy self-sufficiency is also a declared goal. The old oil heating has been replaced by a modern combination heater made of logs and pellets, which is fired with wood from our own forest. A compost heating system (bio-kiln), which will generate hot water by rotting wood chips from wood waste, feeds it into the new heating system and ultimately delivers valuable compost for the garden, is in the planning stage. A photovoltaic system was installed on the roof of the pump house, in which the farm's own well is located. The revival of the former iron forge hydropower plant with a modern turbine is also being planned. Plastic is avoided as much as possible in the holiday apartments. In addition, detergents made from curd soap and generally alternatives to soaps and cleaning utensils are used. Waste is always separated and biological waste goes to the animals living on the farm or is composted.

Well-BeingYoga retreats are offered by external partners. A sauna near the river is also being planned.

The train station in Urft with a direct connection to Cologne is only a 12-minute walk from the entrance to the estate.

Backstage
2. March 2022
Gut Neuwerk: Out to the countryside!